Canada’s largest city, Toronto, finds itself with a genuine mystery this week.  While the rest of the province and the entire east coast is dealing with record cold temperatures and heavy snowfalls, Toronto police are investigating what’s being called a mystery bunker in the midst of the city.

Last Saturday, a Toronto and Region Conservation officer stumbled onto what at first just seemed like a giant pile of dirt in a wooded area near York University’s Rexall Center, though it was a pile of dirt that shouldn’t have been there.  Upon further investigation, officials from Toronto Police division 31 found, to everyone’s surprise, a hidden bunker dug into the forest floor. 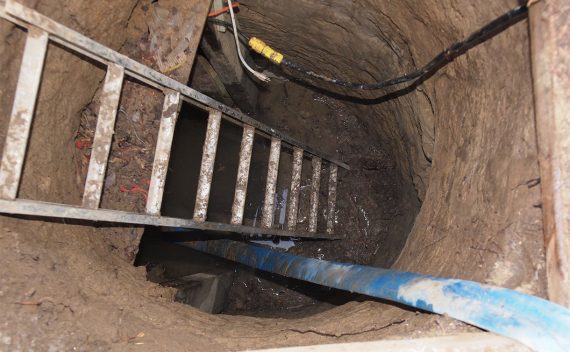 The bunker or mystery tunnel, which was hidden under a sheet of metal, is described as reaching 3 meters (10 feet) below the surface, and consisting of a single tunnel 1.9 meters (6 feet) in height, 0.8 meters (3 feet) wide, and 10 meters (33 feet long).  The internal structure was reinforced with lumber and plywood, and even more surprisingly, contained food and drink supplies, a generator, a sump pump, an air compressor and moisture resistant lights, among other equipment.

"This was built with a considerable amount of sophistication," Mark Saunders, Deputy Police Chief told CTV News. "The individuals responsible for building it clearly had some expertise in structural integrity."

The mystery is…who built it, and why? 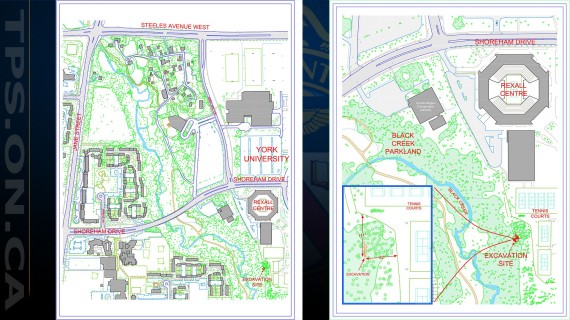 The tunnel, which has since been filled in for safety reasons, was dug in a wooded area situated 25 meters from the fence line of the Rexall Center, which is a world class tennis stadium also known as the Canadian Tennis Center (CTC) and the Rand Pan-Am Athletes Center.  This location is to be the venue for the upcoming 2015 Pan American Games tennis tournament.

Police have stated that they have no reason to suspect the tunnel had any criminal purpose, though no one has yet been able to put forward a believable hypothesis for its use.  Its proximity to an international-level sports facility and to a world renowned university suggests to some that it had a purpose related to terrorism, though neither facility would be considered a high value target to any known terrorist organisation.

Interestingly, found hanging on a nail in the tunnel was a wooden Christian rosary with a plastic poppy attached, of the type sold for Remembrance Day services.  This gives some cause to wonder if the bunker was intended to be some sort of doomsday sanctuary.

Of course, this would all be moot speculation if we had any idea who built it.  Police have appealed to the public for any information, but some, including security expert and CEO of Investigative Solutions Network Inc. Ron Wretham, suggest that it could have been a student project or prank.  That possibility seems plausible, given the sophistication of the structure, and perhaps students from York University’s Lassonde School of Engineering were responsible, though if that’s the case, we’re unlikely to have that confirmed any time soon, due to the possibility of criminal charges for whomever was involved.

One thing is clear, whoever did it certainly put in a few hours to complete the task, and, it would seem, all for naught.

This wasn’t the case for some other tunnels throughout history though.  Hollywood tends to make it seem like tunnel heists are just a movie trope, but news headlines the world over prove that some tropes can actually work.  There have been many bank robberies and other criminal enterprises in recent history that used secret tunnels to great effect.  Last October, three men were arrested in India for participating in a bank robbery by tunnelling under and into the vault.  Nearly £10 million in cash was stolen from Volksbank in Berlin this past January after a group spent weeks tunneling 100 feet underground and cut an enormous hole in the concrete wall of the stronghold.

One of the largest bank robberies of all time was the Banco Central burglary at Fortaleza, in Brazil, where a gang tunnelled into the vault and made off with more than $71 million USD.

Let’s also not forget the infamous smugglers tunnels connecting the US and Mexico, nor the equally infamous and much more deadly spy tunnels connecting Palestine and Israel.  While we’re at it, we should recognise the importance of secret tunnels to the emancipation of slaves during the American Civil War, and those used by both Jewish refugees and by Nazi troops during WWII, as well as the deadly tunnel complexes used by the Viet Cong during the Vietnam War.

It’s doubtful the Toronto Mystery Tunnel has a story even remotely as impressive as any of those.  There are no businesses or institutions of any value (at least from a criminal’s perspective) in that area, so if they were planning to rob a bank, they had a long way to go.  But someone did spend an awful lot of time, effort, and even money to build it, only to have it discovered and reclaimed by authorities.  Forgive me for saying so, but I wish the police had left it and set a watch to figure out some of these answers.

In any event, we’ll keep an eye on the news to let you know if any Morlocks are sighted in the area.

Click here to see more images of the site and the found equipment.

Bigfoot May Be Luring You Into a Scientific Experiment