In Irish mythology, it is said that a race of kings descended from the heavens to the ancient, pre-Celtic culture of Ireland. These tall, bright, shining creatures were elegant and beautiful and brought with them the secret knowledge of the gods. While the Tuatha represent a caste of Irish elemental beings, there are also accounts of them being flesh and blood conquerors of the Fir Bolg, one of the ancient races inhabiting Ireland, coming down and invading from the four northern cities of Falias, Gorias, Murias and Finias, where they acquired their occult skills and magical attributes.

Tuatha Dé Danaan roughly, but imprecisely translates as "peoples/children of the goddess Danu.” In the old Irish tuath means "people, tribe, nation;” dé is the genitive case of día, meaning, "god, goddess, supernatural being, object of worship." They are often referred to simply as the Tuatha, Tua or the Tuatha Dé, which was also used in early Irish Christian texts as a name for the Israelite diaspora, which, in and of itself, is an interesting historical reference, as Danu has also been rendered Anu. The reference – if not already obvious – creates an interesting link between Israel and ancient Mesopotamian mythologies.

According to Lebor Gabála Érenn (The Book of the Taking of Ireland, the Middle Irish title of a loose collection of poems and prose narratives recounting the mythical origins and history of the Irish from the creation of the world down to the Middle Ages), the Tuatha descended to Ireland "in dark clouds" and "landed on the mountains of Conmaicne Rein in Connacht, bringing a darkness over the sun for three days and three nights.” Another version of the story, less steeped in the mistiness of legend, the Tuatha were flesh and blood invaders, landing in a fleet of sea vessels on the shores of what is modern day Connemara, Ireland. As if to seal their resolve, they burned all their ships, so as to provide themselves no mode of retreat. The rising smoke from the fires is said to be the basis for the myth that tells of their arrival in smoke from the skies.

A poem in the Lebor Gabála Érenn says of their arrival:

It is God who suffered them, though He restrained them .
They landed with horror, with lofty deed,
In their cloud of mighty combat of spectres,
Upon a mountain of Conmaicne of Connacht.
Without distinction to discerning Ireland,
Without ships, a ruthless course
The truth was not known beneath the sky of stars,
Whether they were of heaven or of earth.

After a series of wars, it is said that the mythical Tuatha de Danann were defeated, and subsequently receded into the “hollow hills,” eventually coming to be known as the Elven folk of Celtic lore. It is interesting to note that the prefix, “El,” of Elven is a derivative of the ancient Sumerian Elil and the Hebrew Elohim, both being proper pronouns for the names of gods. There exists a startlingly recognizable similarity between the mythological Tuatha de Danann and the Nephilim, as they appear to be etymological descendants in the transmission of religious thought. Elil and Ea were the linguistic predecessors of Elohim and Yahweh (Jehovah). 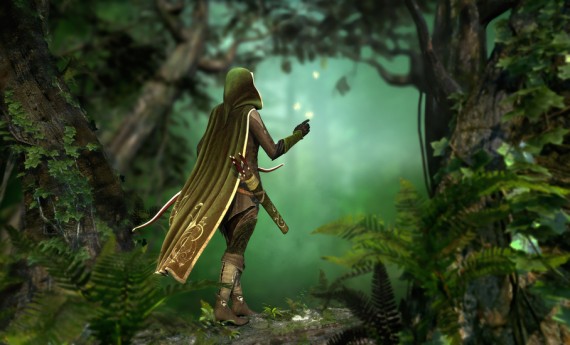 It is also interesting to note that the Tuatha de Danaan are the basis for J.R.R. Tolkien’s tall, elegant, bright, shining Elven people of Lothlorien. Tolkien had his finger on the pulse of a shadowy history, and was more than obviously hailing to those historical roots.

“...The ancient people of the Tuatha De Danann...were the supernatural tribe of the pre-Achaean agricultural goddess Danae of Argos, or perhaps of the Aegean mother-goddess, Danu. But their true name rendered in its older form was Tuadhe d’Anu. As such, they were the people (or tribe) of Anu, the great sky gods of the Anunnaki.”

~ Sir Laurence Gardner, Realm of the Ring Lords: The Myths and Magic of the Grail Quest

The Canaanite territory of northern Israel is said to have once been occupied by the Israelite tribe of Dan, who, during the days of the Bible’s Great Exodus, around 1446 BCE, is said to have separated from Moses and the rest of the Israelites, traveling to the north. It was there that the Danites encountered the worship of Baal/Pan and became involved in the pagan fertility rites practiced by the indigenous Canaanite peoples at Mount Hermon, the very place where according to the Book of Enoch, the Sons of God (the bene ha’ Elohim) descended to the earth and made a pact to mate with human women and have children with them, bequeathing the mythological Nephilim.

The people of the Israelite tribe of Dan intermingled with the Canaanite Tuatha De Danann, also known as the Dragon Lords of Anu, said to be the offspring of the ancient Sumerian Anunnaki. This is also one of the interpretations of the Sons of God intermingling with the “daughters of men,” referenced in the Genesis chapter six story of the Nephilim. One of the interpretations of the story is that the children of Israel, as represented by the tribe of Dan, broke the law of God and intermarried with the Canaanites in the region of Mount Hermon, where the Elohim (the Watchers of the Book of Enoch) were said to have descended. Cultural values of the day did not allow for the women of Israel to intermingle with the men of another culture, so only he men were said to have taken Canaanite brides from the Tuatha de Danaan. Hence, the basis of the story for the “Sons of God” intermingling with the “Daughters of Men.” This integrated tribe of Dan and Danaan/Danu/Anu migrated to the north and west, settling along the way in the European and Scandinavian regions as a conquering nomadic people, replacing those they conquered with their own traditions blended with the Canaanite Anunnaki Serpent culture.

The similarities and multiple connections once again become staggering: Tuatha de Danann, Danites, Tribe of Dan and their linkage to the Dragon Lords, the Anunnaki and the Serpent. Are these simply tricks of word similarities or are the coincidences far too great to overlook? 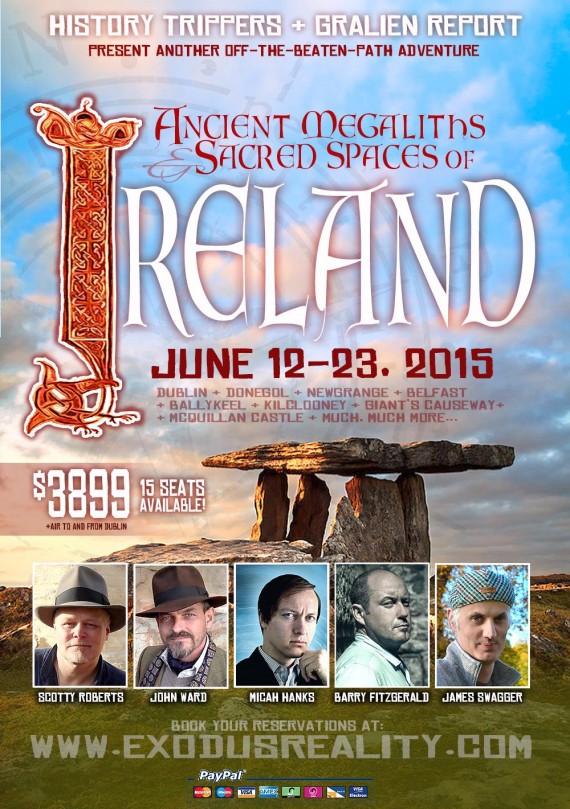 Yet another version of the origins of the Tuatha De Danann - the Dragon Lords of the Anu (before settling in Ireland around 800 BCE) – is that they were the descendants of the Black Sea princes of Scythia, now known as the Ukraine. Like the original dynastic Pharaohs, they traced their ancestry to the great Pendragons (note: Uther and Arthur Pendragon of the Arthurian legends) of Mesopotamia, and from them sprang the kingly lines of the ancient Britons, the Irish Bruithnigh and the Picts, the indigenous people of northern Scotland. In Wales, the Tuatha are said to have founded the Royal House of Gwynedd, while in Cornwall in the southwest of England, they were the sacred gentry known as Pict-Sidhe, connected with the early Merlin (Myrddin) and Tyntagel, the legendary Cornish birthplace of King Arthur.

“So, from a single caste of the original Blood Royal - whether known as the Sangréal, the Albi-gens or the Ring Lords - we discover many of the descriptive terms which sit at the very heart of popular folklore. For here, in this one noble race, we have the ‘elves’, ‘fairies’ and ‘pixies’ - not beguiling little folk, but distinguished Kings and Queens of the Dragon succession.”

~ Gardner, In the Realm of the Ring Lords

In The Psalter of Cashel (the lost Book of Munster) it states, “The Tuatha de Danaan’ ruled in Ireland for about two centuries, and were highly skilled in architecture and other arts from their long residence in Greece.’ According to The Psalter of Cashel, the Tuatha de Danaan were regarded as the descendants of Danaus, the son of Belus, who went with his fifty daughters to Argos, the home of his ancestral Io. In Irish legend, the Tuatha de Danaan, considered to be demi-gods, were said to have possessed a Grail-like vessel. They were teachers of ancient wisdom and the founders of the Druidic priesthood.

In Merovingian legend, and in accordance with modern Reptilian mythos - these are the ancestral Euro-Semitic peoples who forged the bloodlines of the royal families of the Franks, as well as the royal houses of Europe’s history.

Mythology intertwines with history, leaving us to parse and dissect what is fact from what is fiction. In the vaguely historical, mostly pseudo-anthropological works of Zechariah Sitchin, the Anunnaki are space travelers who descended in linguistically forced “fiery rockets.” In historical research, they are the deified human kings of the ancient Sumerians whose descendants migrated north to Black Sea region and south to Palestine, encountering other ancient peoples, merging cultures and language. 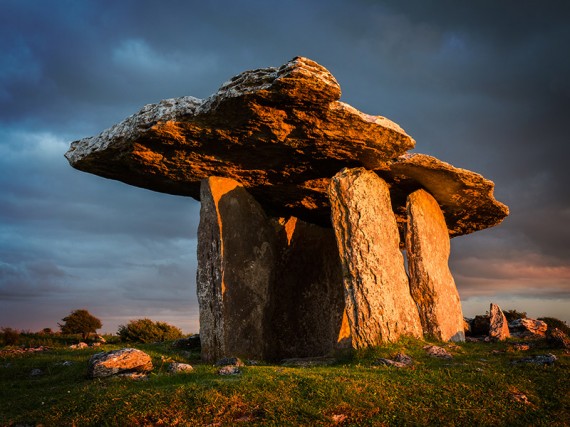 The academic danger we face when studying these ancient cultural tales, is the temptation to romanticize on the basis of notion or fanciful idea. History becomes legend, legend morphs into mythology, fodder for the stuffs of over-active imaginations spurred into overload upon the discovery of some obscure, ancient account that results in the hyperbolic substantiation of a notion, or giving animus to build a new theory that is generally void of historical accuracy. The twisting of facts and figures, dates and interpretations of names, events, locations and archaic religious or occultist practices breathes the breath of life into a rewritten history.

However, that being said, one cannot dismiss the possibilities of the things that we weren’t there to witness. What we are left holding in opposing hands is a sterilized scientific approach, or one that is filled with wonder. Finding the balance – let alone the truth – is an exercise in “squaring the circle.”