A Strange Visit to the Grave of an 1890s Airship Occupant

In the late 1890s, newspapers around the world were abuzz with a most bizarre and sensational series of claims. Mostly, these had to do with airships that were beginning to be seen above earth, fueling speculation about visitors from other worlds sailing through our skies.

On Nov. 25, 1896, the Stockton Evening Mail carried this unusual headline: "Three Strange Visitors Who Possibly Came From the Planet Mars," with the addition that these mystery beings had been seen on a country road by a "Colonel H.G. Shaw and a Companion."

The bizarre looking individuals, wearing no clothes but covered in a strange, silken "growth" about their bodies, were recalled recently by Record columnist Michael Fitzgerald:

“We were jogging along quietly when the horse stopped suddenly and gave a snort of terror," Shaw said.

"Looking up we beheld three strange beings. They resembled humans in many respects, but still they were not like anything I had ever seen. They were nearly or quite seven feet high and very slender. ”

Stories like these, in many cases the stuff of newspaper dailies that were having a lighthearted go with their readership, were widely reported around the time. In fact, a similar case made headlines in 1897 when one of the "airships" associated with these supposed space-creatures reportedly crashed near Aurora, Texas. According to popular local legend, the sole inhabitant of the aircraft, who died when the vessel collided with a windmill, was buried in a local graveyard.

A few days ago I decided to make the trek to that graveyard, after getting directions to it from fellow MU blogger Nick Redfern, who lives nearby. Nick was unable to join me himself due to a prior engagement, and hence my traveling companions were Cam Hale and Kyle Philson of the Expanded Perspectives podcast, who joined me for a visit to the famous location.

At the entrance to the cemetery is an official state sign, procured in the mid 1970s, which actually notes the supposed "alien" funeral that occurred here. One portion of it reads:

"This site is also well known because of the legend that a spaceship crashed nearby in 1897 and the pilot, killed in the crash, was buried here."

The cemetery is much like any other you'd expect to see in a rural community, and there are no other particularly defining characteristics about it. This may not have always been the case, however; another native Texan, author Jim Marrs, told me about his visit to the same location when he visited Asheville, North Carolina, a few years ago. In his book Alien Agenda, Marrs describes how he had formerly written about aerospace and aviation for the Fort Worth Star Telegram, and following up on the story of the 1897 crash, in 1973 he had contacted Bill Case, another writer with a background in aviation who claimed he knew some details about the incident. Marrs noted that he found Case "to be exactly what one would expect of an aviation writer. He was a practical man who was highly knowledgeable of the aircraft industry and, like most people in that field, very precise and technical in his approach issues."

Marrs went on to describe his visit to the Aurora cemetery with Bill Case, where he was shown the purported headstone of the airship's occupant:

"Case told me he had spoken to some of the old-timers in Aurora and was convinced that something had indeed occurred there in 1897. I arranged to meet Case at the Aurora cemetery where he showed me what he said was the airship’s pilot’s grave. The grave was not full-size. It was obviously the grave of a child or very small man. At the head of the grave was a crude rock headstone. It appeared that half of the marker had broken off and was missing. On the remaining half was etched a design the resembled a large V lying on one side. Inside the V shape were three small circles. The entire design indeed resembled one end of a saucer shaped structure, and the small circle seemed to be portholes. I was acquainted with the old cemeteries in the area, many containing the graves of early settlers and the Maltese cross markers of Confederate soldiers. This was a very unusual and intriguing marker."

Case further indicated to Marrs that using a metal detector helped him outline three pieces of metal that had been buried alongside the purported "alien" grave. Around that time, Marrs had sought any locals who might have been witnesses to the events of 1897, one man in his 80s, Charlie Stephens, claiming he vividly remembered his father traveling by horseback into town the day after the crash, and reporting that he had observed the wreckage, but no "alien" bodies (Marrs found this detail encouraging, since the body was purportedly buried immediately after the crash, and hence would not have been visible by the time Stephens' father would have arrived). Others said the entire thing had been a hoax administered by the town judge, and that there had in fact been no windmill on the property in question at all.

An interesting side note about this, however, was turned up during an investigation that accompanied filming for an episode of History Channel's UFO Hunters program. During the investigation of the property formerly owned by Mr. Brawley Oates, who purchased the land in 1935 that had belonged to Judge J.S. Proctor at the time of the supposed crash, the discovery of an old windmill base near the location of a "contaminated" well on the property seemed to conflict with previous statements that no windmill had existed there. Metal samples were purportedly taken from the well also, which Mr. Oates complained had "contaminated" the water within (analysis of the water in 2008 only indicated a high concentration of aluminum in the samples).

According to Marrs in Alien Agenda, previous analysis of the actual metal samples retrieved had garnered mixed opinions: some claimed that they were primarily iron in composition, but strangely, bearing no magnetic properties. Marrs also notes that Philip J. Klass claimed a Canadian study found the samples were "unordinary", but gave no citation for this claim.

A final strange twist in the case involved Marrs being brought back to the cemetery later by Bill Case, who revealed that no traces of metals below ground could now be detected; his opinion at the time, Marrs reports, was that they had been taken from the site by "the government."

The story would seem highly dubious under any other circumstances, and in truth, the majority of it does still seem incredible. Perhaps we cannot rule out that something was happening in the skies over the United States, parts of Europe, and other countries in the 1890s, but what was it?

Less often discussed in relation to the "mystery airship" reports of the 1890s is the fact that several airship designs, some of them steam-powered, and capable of a surprising degree of maneuverability for their day, were being produced by as early as the 1850s. These included crude designs by Henri Giffard, who built such a prototype in 1852; Dupuy de Lome’s propeller driven airship would follow, and was able to carry up to eight individuals, and was capable of limited flight by 1872. Gas engine designs would appear around the same time, such as Paul Haenlein’s airship which used an early internal combustion engine to inflate the craft, and Charles Ritchel also built a hand-powered aircraft six years later, which was so successful that he managed to build five more of the aircraft, which he sold. It would be nearly two decades before reports of the "mystery" airships would begin to appear, prompting speculation about some eccentric--and secretive--inventor somewhere who had made his own private innovations on the earlier designs which, until recently, had maintained a surprising degree of obscurity even among aviation historians, as noted by researcher J. Allen Danalek in his book, The Great Airship Mystery of 1897.

Of equal intrigue are patents that have come to light over the years, such as this one, attributed to a Mr. C.A. Smith, dated August 11, 1896: 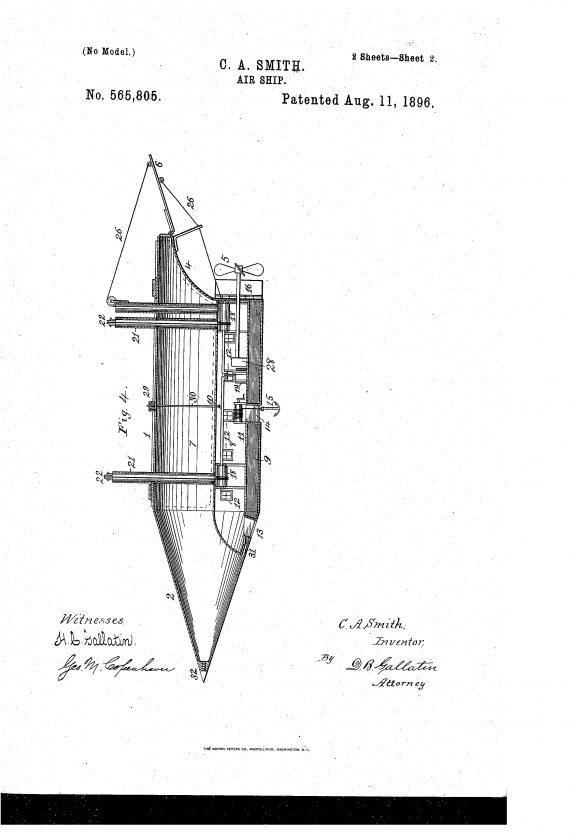 Within just a few months, reports of a surprisingly similar flying object were making headlines after being seen over parts of in southern California (quite near Smith's home, in fact), as well as other parts of the country.

And in Aurora Texas, near the site of a (once contested) windmill, local legends still tell that such a craft may have crashed, killing and badly burning the remains of an "alien" occupant whose body--whatever its origins really may have been--were too badly scorched to be discernible.

To assert that an actual airship had existed around the time, and one capable of the sorts of flight described in newspaper reports of the day, is not impossible. It is entirely speculative, however, and should be taken with a grain of salt. Hence, for now, and perhaps forever, the great mystery of the Aurora crash will remain just that: a mystery, and only one of the many colorful legends of the Lone Star State that still make news occasionally even today.

Controversial Anti-Aging Science Is Here… But Only in South America