An Island of the Dead(ish)

Imagine a movie, the key ingredients of which revolve around the outbreak of a deadly plague, an island under quarantine, a cast of characters that - one by one - fall victim to the relentless pandemic, and a presumed victim of the plague who returns to life and attacks and kills the living. It sounds like the perfect scenario for a twenty-first century zombie movie. It is not, however. Rather, in abbreviated form, that is the storyline of a 1945 production called Isle of the Dead. It is a movie that starred horror legend Boris Karloff.

The story itself is set in 1912, at the height of the First Balkan War. It was a deadly confrontation between what was termed the Balkan League (comprised of Bulgaria, Greece, Serbia, and Montenegro) and the Ottoman - or Turkish - Empire. As a small island off the coast of Greece becomes enveloped by a deadly and mysterious plague, the residents and troops are placed under careful quarantine, as part of a concerted effort to prevent the virus from reaching the mainland.

Karloff, as General Nikolas Pherides, is the man chiefly responsible for enforcing the quarantine, something which does not go down well at all with the terrified island folk, each and every one of who are - not surprisingly - wondering who will next fall victim to the lethal outbreak. In no time at all, it becomes very apparent who will be next: pretty much everyone. Amid the concerns about the nature of the near one hundred percent fatal pathogen, rumors begin circulating that the viral outbreak has far less to do with a normal disease and far more to do with the actions of an undead, blood-drinking, and flesh-eating monster that preys on the living.

It is a creature that has the ability to infect the living and transform them into horrendous monsters of vampire-meets-zombie proportions. Its name: the vorvolaka. The outbreak, one Madame Kyra suggests, is God's punishment against those on the island that harbored a vorvolaka prior to the eruption of the plague. While some of the survivors - including General Pherides - openly scoff at such an idea, others are not quite as sure it's all nonsense. 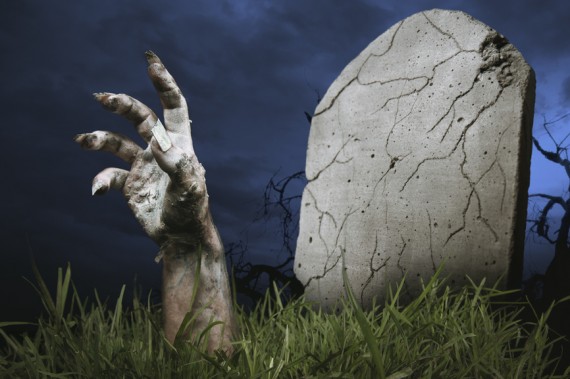 The possibility that Madame Kyra is correct becomes acutely apparent when one of the characters, Mrs. Mary St. Aubyn, seemingly dies from the effects of the lethal virus and is entombed, but then breaks out and proceeds to violently slaughter the living, including General Pherides, who she fatally stabs.

The audience, however, finally realizes that Mrs. Aubyn was actually free of infection. At the time of her assumed death, she was suffering from catalepsy - a condition that provokes rigidity in the human body and a dramatic decrease in both heart-rate and breathing. But, finally having recovered and broken out of her tomb in a deranged state, Mrs. St. Aubyn is perceived by some as a vorvolaka.

Ironically, one of those is General Pherides, who, with his dying breath, finally becomes a believer in the existence of the monster and maintains that his killer was indeed a crazed vorvolaka. In the end (which is, admittedly, somewhat confusing), the viewer is left to make up his or her own mind: God's wrath? Paranormal punishment thanks to a zombie-like monster? Death by a fast-acting, lethal virus of wholly down to earth proportions? Or, in terms of Mrs. St. Aubyn, a case of catastrophic misdiagnosis? Maybe, it's a mixed up bit of everything.

Whatever the answer, it's worth noting that Isle of the Dead - seventy years ago, no less - told a story of undead-like entities, strange viruses, hastily established quarantines, and the deranged attacking the living. Isle of the Dead may not be the greatest of all horror movies ever made. But, it's hard to deny its position as a definitive trendsetter for things destined to become commonplace in terror-driven films of decades later.