Dead birds on the ground are never a good sign. If they’re dead before they hit the ground, it’s probably worse. Police and wildlife official in Spring Hill, Tennessee, are trying to figure how a road there ended up covered with dead birds – some apparently split in half before smashing into the asphalt.

Up to 100 dead birds were found by local Spring Hill residents on the afternoon of February 28 on Northfield Lane in Maury County. The police were called and were followed by officials from the Tennessee Wildlife Resource Agency who picked up some of the dead birds and took them back to the lab. The officials noted that some of the birds were “split open” and “they have never seen anything like this.” No species identification was given at the time.

After some investigation, a witness was found. Russell Thomas told police he was delivering pizzas on Northfield Lane at 3:30 pm when his brand new white compact car was bombed with birds. He says he stopped to clean the bird guts and feathers off of his new car and continued making deliveries. It’s not clear if any of the birds were alive when Thomas hit them or when they were run over by other cars.

There are some possible causes for this type of Fortean event. A flock of birds can get soaked by a sudden rainstorm or frozen by a cold front. A mass avian disease can infect the entire flock, causing it to succumb during the stress of flight. The illness can be self-induced, as in the reported cases of birds eating fermented berries. The mysterious loud booms have been blamed for shocking birds to death – which may explain the birds dying but not the booms themselves. 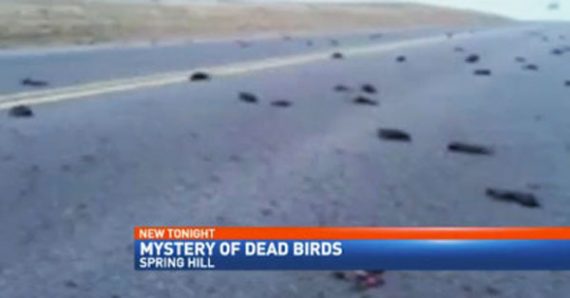 Strange Tales of Horror in the Desert