Is the Legend of Spring Heeled Jack Worth a Second Look?

Beginning in the Spring of 1888, a series of grizzly murders would shake the city of London so badly that, even today, they remain among the most famous crimes ever committed. Attempts at bringing the killer to justice have led to numerous theories about the identity of the man who became known to history as Jack the Ripper. Today, despite a number credible leads that have been presented since Jack's reign of terror, along with new evidence that employs modern science to try and crack the case, a conclusive case for The Ripper's identity has remained elusive.

The infamous killer of Whitechapel was by no means the first eerie figure to terrorize Londoners by night. Five decades before Jack the Ripper first scrawled his name in red ink on a letter sent to London's Central News Agency, a less murderous--though far more strange--series of incidents would arouse similar terror among the people of London, and under a similar name that remains one of the most odd and evocative in the annals of Forteana.

Bearing clawed hands, strange metallic armor, and the ability to leap the high walls of London's suburban sprawl with ease, Spring Heeled Jack would become one of the most recognizable characters in London's Victorian-era folklore. Purported sightings date back to 1837, with close encounters reporting a ghastly, demonic villain clad in oilskin and a long cloak, who would belch flames at his victims. 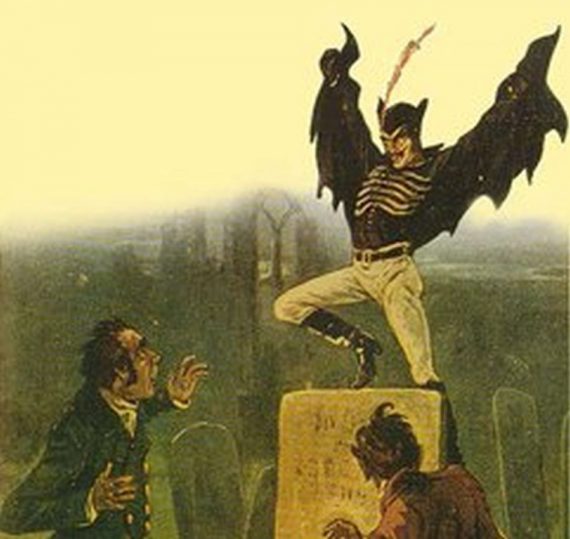 The stories of Spring Heeled Jack are well known, and have been written and re-written as items of mystery and intrigue for more than a century already. Hence, we won't worry with recollection of the more popular events in the narrative here; instead, we will shift our focus to some of the stranger additions to the legend, and how a few interesting comparisons begin to emerge in relation to similar traditions around the world.

To begin one year after the first appearance of the senior "Jack", on January 9th, 1838, Sir John Cowan stood before the public at the Mansion House, reading from an anonymous message sent to him about the devil known as Spring Heeled Jack. Signed, "a resident of Peckham", the Lord Mayor read the following before the curious onlookers:

"It appears that some individuals (of, as the writer believes, the highest ranks of life) have laid a wager with a mischievous and foolhardy companion, that he durst not take upon himself the task of visiting many of the villages near London in three different disguises — a ghost, a bear, and a devil; and moreover, that he will not enter a gentleman's gardens for the purpose of alarming the inmates of the house." 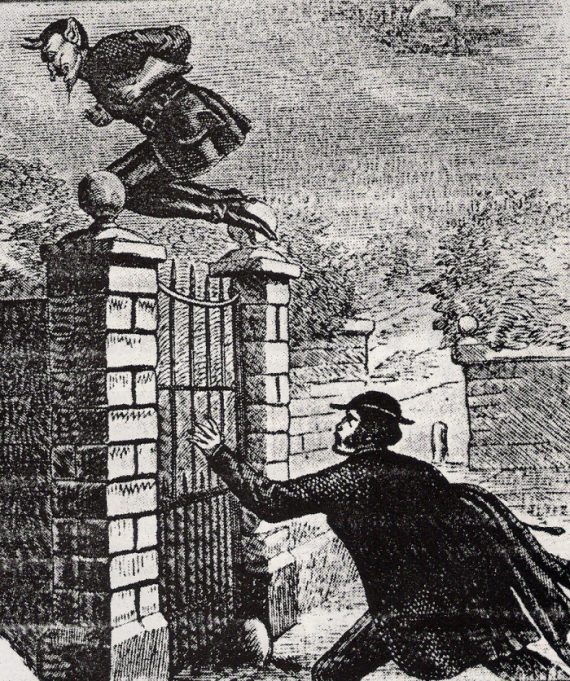 We needn't read much further in the dialogue to learn what sorts of phenomena this "resident of Peckham" had been addressing. Three months later, this "ghost-bear" of a character would carry out an "attack" so similar to that described here that one must begin to guess about the popular image of "Jack" that so many have held over the years:

A peculiar report, which according to The Brighton Gazette had first appeared in the April 14, 1838 edition of The Times, told of a gardener at Rosehill, near coastal Sussex, described a series of events that purportedly transpired one day earlier. The gardener, the story read, was attacked by some kind of monster, "in the shape of a bear or some other four-footed animal". The creature scaled the garden wall, and ran the perimeter of the wall on four legs before leaping down into the garden and chasing the caretaker. The man was unharmed, but left badly frightened, as the "creature" climbed the wall again after pursuing the gardner for several minutes, and left the same way it entered.

A rather curious side note about this affair: The Times article cited for this, purportedly once available at their website, is listed by Wikipedia as having being titled "The Whitechapel murder", dated 14 April 1838, and appearing on page 7. Obviously, the date would not have allowed this mention of a murder in Whitechapel to have been confused with the junior "Jack" (The Ripper), who would terrorize the city many decades later. Therefore, one must wonder what a beast attacking a gardener in Sussex has to do with any coincidental murder that took place in Whitechapel, even if the latter had occurred around the same time, and a good five decades before The Ripper murders ever made headlines. Hence, one begins to wonder whether there could there have been a mix-up somewhere with the dates, as it pertains to the reporting of two similarly-named, but very different Victorian folk devils.

Regardless, the tale of the gardener is an interesting one, in that it has begged the question of whether an unrelated incident had merely been lumped in with the entire "Spring Heeled Jack" affair, purely because it was popular news at the time. Another interesting parallel has to do with the fact that there have been similar crossovers with bear and monkey-like "folk devils" that appear from time to time, but occurring in other parts of the world, which, rather strangely, bear in equal measure those "armored" and "leaping" character traits more common to the "Jack" mythos.

Writing for the New Page Books blog, I noted some of these curious crossover elements in relation to an equally curious Fortean occurrence, which involved a so-called "monkey man" witnessed near New Delhi, India:

"What, if anything, was the Monkey Man of Delhi? Many have compared the beast to the Himalayan Yeti or its cousin, the famed Abominable Snowman of the Americas known today as Bigfoot, with some reports marking the Indian monster well above seven feet in height, and possessing not only superhuman strength, but the curious ability to leap great distances, often making its escape by ascending to the tops of buildings and leaping from roof to roof. These epic reports were likened to some manifestation of the Indian god Hanuman, whose hybrid appearance bore aspects of both man and ape. However, despite these depictions of Delhi’s monster as being of truly monstrous stature, generally the more consistent reports of the Monkey Man topped the creature off at just four feet tall. But perhaps the very strangest aspect of this beast was the fact that in many cases, it hardly seemed to resemble any “monkey” at all.

A variety of alternative descriptions paint the picture of a small, helmeted man, clad in armor or some kind of bodysuit with large buttons upon the breast. Additionally, many of those alleging to have been injured by the beast described having been clawed by what appeared to be metallic claws the monster wore. Stranger still, there are entirely different reports from either of these monkey-like or armored-man scenarios, which describe the creature as looking bandaged like an Egyptian mummy, giving it a more classically horrific appearance the likes of which one would expect in American cinema. Still others would describe the beast as being “machine like”, and while resembling a monkey, also sporting blinking red and blue lights."

I find it quite intriguing that such interesting parallels exist between the more obscure "Spring Heeled Jack" reports, and the leaping "Monkey Man" of New Delhi. Similar legends about what I've come to refer to as "leaping louts" have appeared elsewhere over the years: during the Second World War, there was a folk tale about a sort of superhuman character called "Perak the Spring Man", who was said to be a sort of protector of Prague, and much like "Jack", was able to leap about in extraordinary ways.

To end on a rather intriguing note that brings us to modernity, there have been continued reports into the present of strange things, often compared with "Jack", that are seen in parts of England. An article by Lauren May appearing in the Thursday, February 23, 2012 edition of Your Local Guardian tells an unusual story about a family who, along with the driver of their taxi, witnessed a strange, featureless "something" moving at blinding speed across the road ahead of them.

Scott Martin, the father, described being en route with his family on their way from Stoneleigh. It was Valentine’s Day, and shortly after 10 PM when a ‘dark figure with no features’ was observed passing quickly on foot in front of their taxi, and then leaping an estimated 15ft over an embankment near the Ewell bypass:

"We didn't pay much attention until he started crossing over to our side of the road, the next thing he jumped over the centre fencing in the road and ran across our two lanes.

"On the side of our road is a bank easily 15ft in height and this figure crossed our road, climbed this bank and was gone from sight all in about two seconds.

"All four of us were baffled and voiced our sighting straight away with the same detail. A dark figure with no real features, but fast in movement with an ease of hurdling obstacles I've never seen.

"My last image was of him going through the bushes at the top of the bank."

Mr Martin said the driver of the taxi shared his fears as the mysterious figure made off.

"I'm not usually one to be freaked by these sightings but the cab driver was petrified," he added.

It is indeed a curious report, which, as one might imagine, actually has been compared with the infamous "Spring Heeled Jack" reports of the early 1800s. Yet, as would be obvious to the reader, the description seems to bear more similarity to the varied reports of the "wild" creature that pepper the more obscure areas of the senior Jack's folklore, or even that of New Delhi's "Monkey Man". It's hard to guess what one should be expected to make of these kinds of odd crossovers, if anything... could there be a natural explanation underlying all of these incidents?

Was Spring Heel Jack merely a prankster who enjoyed getting a rise out of the London night-timers, and do the tall tales of "leaping louts" actually stem from their association with the curious, but potentially explainable, tales of "monsters" seen nearby? Or would a sociological explanation, one the likes of which researcher Stanley Cohen offered in 1972, present a better case for these supposed "folk devils", and the strange connections between them that have continued to appear over the years?

Was A UFO Seen Recently Near Area 51? Not Quite 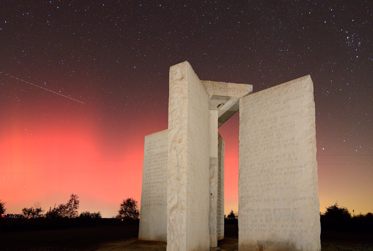