While the rest of the world was buzzing about the report by NASA scientists that Mars possibly had an ocean with more water than Earth’s Arctic Ocean about 4.3 billion years ago, the Mars Orbiter launched by the Indian Space Research Organization (ISRO) was looking at something that happened a little more recently – what appears to be a mushroom cloud on the surface of the planet!

India’s Mars Orbiter Mission (MOM) was launched on November 5, 2013, and entered Mars orbit on September 24, 2014. Images taken by the onboard Mars Colour Camera (MCC) and displayed on the ISRO website are breathtaking in color and clarity. Especially the one with the mushroom cloud.

The cloud is in the enormous Valles Marineris Canyon. It’s definitely mushroomed-shape and enlarged views of it show what looks like a crater formed underneath the cloud and a shadow of the cloud extending from it across the surface.

So what caused this mushroom cloud to form? We can probably rule out surface wind because it’s rare on Mars and the cloud lacks a windy swirl. The Curiosity Rover has recently detected methane, but the amounts are far too small to cause such an explosion and craters like we’re seeing in Siberia.

Is it a nuclear cloud? Dr. John Brandenburg writes in his recent book, “Death on Mars: The Discovery of a Planetary Nuclear Massacre,” that the “high concentration” of Xenon-129 in the Martian atmosphere and uranium and thorium on the surface are remnants of a nuclear explosion by an alien invader that wiped out two ancient Martian civilizations. Have they come back? Was the explosion from an old leftover bomb? Is there a war on Mars we don’t know about?

Another explanation might be the comet Siding Spring which passed close to Mars on October 19, 2014. NASA cut off the live video feed of the comet before it passed (what a surprise) but amateur astronomer Dr. Fritz Helmut Hemmerich made a video from the Canary Islands after it passed showing an explosion. Did MOM happen to be looking at just the right spot when a piece of Siding Spring sprang and crashed? How would they know? Why would ISRO be photographing during the comet’s pass but not NASA? Is NASA hiding the cause of the explosion?

Nuclear explosion? Methane blast? Comet crash? A warning to Mars One settlers? Something else? You never know with mushroom clouds. 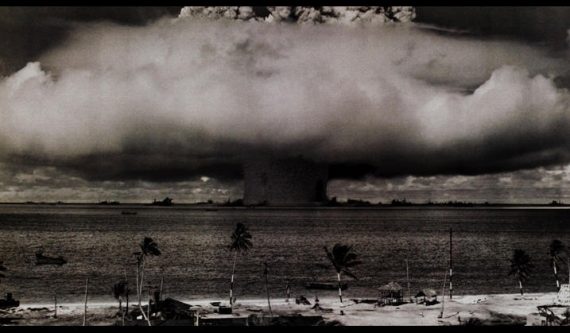 The Village of People Who Consume Arsenic and Don’t Die