Situated in Idaho, Lake Pend Oreille is a huge expanse of water. It's in excess of forty miles in length and 1,100 feet in depth. And, it might accurately be said that the lake is the home of a creature not unlike Loch Ness, Scotland’s legendary long-necked beast. You know the one I mean: it's best known to just about everyone as Nessie. Or, just possibly, Lake Pend Oreille’s resident lake monster – which goes by the name of Paddler – might be something even stranger.

Sightings of the prehistoric-looking thing date back to the 1940s and continue, albeit sporadically, into recent years. A particularly spectacular encounter with Paddler occurred on Memorial Day 1985. That was when a woman named Julie Green was on the lake with several friends when they caught sight of something huge and fantastic. It was a large, gray-colored thing which raced across the lake, seemingly partially above and below the surface of the water. That the presumed beast was only around 600 feet away meant Green and her friends were able to determine that whatever it was, it certainly wasn’t a wave.

Then, in 1996, the Groves family of Pasadena, California – vacationing with relatives who lived in the lake area at the time – reported seeing early on a Sunday morning a large, gray-colored object break the waters in near-violent fashion. The portion of the thrashing creature that could be seen was described as resembling the back of an elephant, in both color and size. Needless to say, Lake Pend Oreille isn’t home to a herd of elephants that enjoy frolicking in the lake just as dawn breaks.

Monster hunters are content to suggest that Paddler (or, more likely, the Paddlers) is either an unknown animal or one from the Jurassic era that - against all the odds - has managed to survive extinction. There is, however, another explanation for the presence of the monster. It’s a very alternative explanation, too. Patrick Huyghe is someone who has undertaken extensive research into the saga of Paddler and he has noted something that may well be of deep, relevant significance: “The very first mention of Paddler came straight from the Navy’s own Farragut Naval Training Station, established on the southwestern end of Lake Pend Oreille in 1942.”

Built in response to the terrible events at Pearl Harbor in December 1941, the FNTS was created at Lake Pend Oreille and through which around 290,000 servicemen and women passed, as the hostilities with the Axis powers grew. What is particularly interesting, however, is that in the post-war era – that’s to say, after 1945 – the Navy presence on the lake began to change. The one arm that began to play a more substantial role as the years rolled by was the Navy’s Acoustic Research Department. 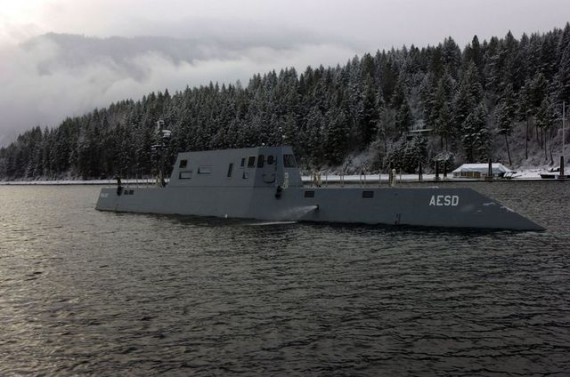 The ARD says of its work: “Unique experimental hardware and floating platforms have been developed” at the naval facilities on Lake Pend Oreille, noting too that, “future plans include continuation of sonar dome development and submarine silencing and target strength reduction experiments using large-scaled models.”

One has to wonder if some of these “unique experimental hardware,” “floating platforms,” and “large-scale models” may have been responsible for at least some sightings of what the witnesses believed was the legendary Paddler. Maybe, even all of them.

Writer Patrick Huyghe - who has, without doubt, done more than anyone else to resolve the matter of what Paddler is -  notes something that is supportive of this particular theory: “In 1949 and 1950, a few years after this secret Navy test site opened, the next two accounts of the lake monster appeared in local newspapers.”

Lake monster or futuristic submarine technology? The question remains unresolved. Maybe, incredibly, the answer could even be a bit of both. Whatever the truth - secret sub or slithery serpent - the legend of Paddler lives on.

The Robots Are Right Around the Corner