Next to the Roswell affair of July 1947, probably the most talked-about, alleged flying saucer crash is that said to have taken place at Aztec, New Mexico, in 1948. According to information related to the author Frank Scully (and published in his highly successful 1950 book, Behind the Flying Saucers), a number of late-1940s incidents led US authorities to recover the wreckage of four alien spacecraft and numerous extraterrestrial corpses, all of which were being studied under cover of the utmost secrecy at various defense establishments in the United States.

As Scully was willing to admit, the bulk of his information had come from two sources: Silas Mason Newton (described in a 1941 FBI report as a “wholly unethical businessman”) and one "Dr Gee," the name given to protect eight scientists, all of whom had supposedly divulged various details of the crashes to Newton and Scully. According to Scully’s sources, one such UFO was found in Hart Canyon, near the town of Aztec, in March 1948.

So the tale went, after the Aztec saucer crashed, it was located, essentially intact, by elements of the US military that gained access to the object via a fractured porthole. Inside were found the bodies of no fewer than 16 small, human-like creatures, all slightly charred and undoubtedly dead. The UFO was then dismantled and transferred, along with the bodies of the crew, to Wright Field air base, Dayton, Ohio, for study. Basically, that's the legend, the truth, the lie, or the outright hoax - depending on your own personal perspective.

Over at his UFO Conjectures blog, Rich Reynolds has been busy tying together the strands of a story suggesting that Newton may actually have gotten his data from either Hilda or Bernerd Ray (or both) - the Rays being none other than the key, long dead individuals in the matter of the so-called "Roswell Slides."

Newton (who, along with a certain sidekick of his, prompted me to title this article Roswell Slides and Shady Characters) was someone who was known for his many and varied business cons and swindles. That does not, however, take away the fact that Newton was a skilled businessman and someone who was plugged into the world of Hollywood, high society, big bucks, and powerful figures.

Could Rich Reynolds be correct that the Aztec affair was born out of data provided to Silas Newton by the Rays - data that Newton may have chosen to direct away from Roswell and towards Aztec and possibly as a means to protect, and to deflect attention from, the Rays as his sources? Let us see what is known about Newton and that aforementioned, certain sidekick of his: a man named Leo Gebauer.

At the time of its release, Scully’s book caused a major sensation. In 1952 and 1953, however, JP Cahn, a reporter who had previously worked for the San Francisco Chronicle, published two detailed exposés which cast doubt on the claims of Newton and "Dr Gee" (identified by Cahn not as "eight scientists" but as one Leo Gebauer, whose background was as dubious as that of Newton).

Born on 25 February 1903, Leo Arnold Julius Gebauer – Frank Scully’s mysterious "Dr Gee' – is the subject of an FBI file no less than 398 pages long. Interestingly, fewer than 200 pages of the file have been declassified under the provisions of the US Freedom of Information Act. Nevertheless, as the available papers demonstrate, Gebauer was, to put it mildly, a colorful character.

“What this country needs is a man like Hitler; then everybody would have a good job… It would be God’s blessing if we had two men in the United States to run this country like Hitler. The English people are nothing but a dirty bunch of rats. We should stay home and tend to our own damn business and let Germany give England what they had coming.”

Even more controversially, and demonstrating where his loyalties lay, Gebauer went on to describe Hitler as a “swell fellow,” adding that, “the guy who shoots President Roosevelt should be given a gold medal”. As FBI Special Agent JJ McGuire noted: “Gebauer is always pointing out the good points of the German Government over the English and our democratic form of Government.”

Controversy continued to surround Gebauer, as a memo from the Denver office of the FBI, dated 14 February 1969, shows. It refers to an unnamed source who “threatened to do bodily harm to Gebauer and demanded $50,000 as part of commissions due him”.

Silas Mason Newton, Frank Scully’s main source for the Aztec "crashed UFO" story, attracted his own fair share of controversy. An FBI document dated 30 September 1970 states: "Newton was born on July 19, 1887, at Shelby County, Kentucky. He is divorced and is a college graduate. He has claimed his occupation was that of a geologist, who has an income of $500 a month. He claims to have a Bachelor of Science in geology from Baylor University and to have studied for six months at Oxford University."

The FBI took a keen interest in the intricacies of the Aztec affair and its files of 1952 tell a notable story:

"Regarding the saucer story in July 1949 Gebauer, as a specialist in geomagnetics, became consultant to Newton, an alleged geophysicist, using instruments of his own design to make microwave surveys of oil pools. Newton had been a friend of Scully, who writes a weekly column for Variety; and in the fall of 1949, Gebauer discussed saucers with Newton and Scully at which time he claimed to have conducted secret inquiries with the government and other scientists on several saucers which had landed in New Mexico and Arizona." 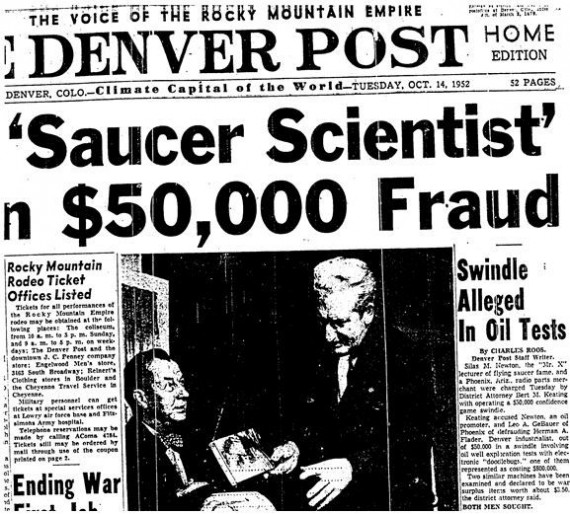 "Gebauer claimed to have recovered from these saucers the tubeless radio, some small gears and small disks, all of which material had been secreted by Gebauer from the other scientists and government investigators. The three men agreed to publish a story of Gebauer’s discoveries, but because of Gebauer’s connections with the matter, he was to be identified only as Dr Gee. To determine the reaction of the public to an unauthenticated story of the actual existence of flying saucers, on March 8, 1950, Newton, as Scientist X, appeared as a guest lecturer before a science class at Denver University."

The documents reveal even more:

"Newton told of Dr Gee’s findings, and the substance of the lecture leaked out to the newspapers. As a result, Scully wrote his book setting forth Dr Gee’s discoveries and revelations. After reading the saucer story, JP Cahn noted several inconsistencies, and he determined to make an investigation to determine whether the story was based on facts or a hoax. In the beginning he went to Scully, but was unable to obtain the identity of Dr Gee, and Scully was reluctant to produce Newton. Cahn met Newton in Scully’s home at which time Newton claimed to be a graduate of Baylor University and Yale University, and a post-graduate of the University of Berlin.

"Newton promised to discuss with Dr Gee the proposition to disclose fully an authenticated announcement that space ships were landing on Earth, together with photographs, metals, and other evidence. Newton exhibited a couple of gears, fine-toothed and about the size of pocket watches, and two disks of unknown metals, all being tied up in Newton’s handkerchief. He alleged these items were obtained from one of the saucers."

And we also have this from the FBI:

"While in Scully’s book, Dr Gee was said to have degrees from the University of Berlin, Gebauer only claimed electrical engineering degrees from Louis Institute of Technology in Chicago in 1931 or 1932; that while the book claimed from 1943 to 1945 Dr Gee had headed 1,700 scientists doing experimental work in the secret magnetic research, Gebauer was merely chief of laboratories of Air Research Company in Phoenix and Los Angeles, mainly in charge of maintenance equipment.

So, was the Newton-Gebauer-Scully story factually correct? Was Gebauer really the elusive Dr Gee? Or was the entire matter without foundation? Might Newton have gotten the tale from Bernerd and Hilda Ray and changed it from Roswell to Aztec? Certainly, there are enough nuggets of data in this article - and plenty of leads - that can be followed up on. Just maybe, the strange and controversial saga of a near-infamous conman is still not over.