The Best Places to Ride Out the Zombie Apocalypse, According to Science

When asked by a colleague from another country why Americans like zombies so much, my initial thought was probably the most accurate. We like to shoot things. The end. Game, bottles on an old fence, road signs. Anything we can put our sights on, click, boom. For those of you from countries with strict gun legislation, this is called fun. However, when pointing guns at people, click, boom is frowned upon.

The bad news is the authorities are preparing for them.

The U.S. Pentagon, obviously no longer worried about pesky things like nuclear war, has developed a plan in case the United States is overrun by the living dead. Pathogenic zombies, space zombies, chicken zombies (seriously), the U.S. military is ready for everything. But the Pentagon isn’t alone in this zombie prep.

The Centers for Disease Control and Prevention has a plan for zombies. Even the conservation department in my home state, Missouri, has a page on its website devoted to zombies as an invasive species. 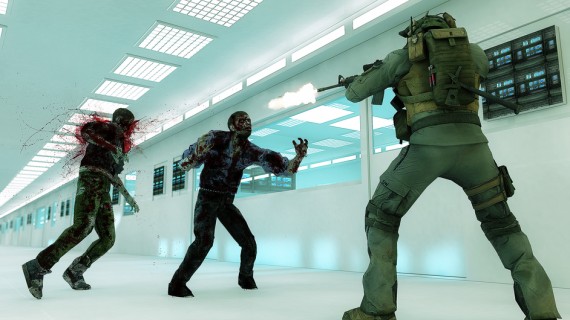 Sure, these plans appear tongue-in-cheek, but someone might be trying to tell us something. Watch out the next time you’re in the woods. Bigfoot is the least of our problems.

Cornell University is joining the moaning, shambling warning system. Graduate students there have used our friend Science to determine the optimum place to flee in case the undead begin walking, and snacking.

"Modeling zombies takes you through a lot of the techniques used to model real diseases," researcher Alex Alemi said in an interview with livescience.com, followed by a lot more words I suspect were in Klingon.

The Cornell study took into consideration the population size/density of an area, and the rate at which the infection of such a virulent disease would spread. The largest cities would fall first, followed by smaller nearby cities, and finally the countryside.

Sorry New York City, you’ll be the first to go.

The researchers, probably packing winter clothing as they conducted their interview, pushed people toward the mountains, preferably the upper Rockies. The Appalachian and Great Smoky Mountains are obviously dangerous, and still rife with moonshining rednecks.

If you can’t make it to the upper Rocky Mountains, The Huffington Post released “The Best and Worst Places to Survive the Zombie Apocalypse.” The best states are:

The worst places in the United States are the Midwest (damn), and New Jersey. Seriously? Who wants to go to New Jersey anyway?

Outside the United States, the Zombie Research Society (yes, this is a thing), has listed the best countries in which to ride out the zombie-fueled end of the word:

But I have a better idea.

In 2012, Rudy Eugene earned the name the Causeway Cannibal because he stripped off his clothes, attacked a homeless man, and ate the man’s face. Authorities suspected the superhuman strength Eugene displayed was due to bath salts. Toxicology reports showed negative.

In February of this year, a man near Tampa, Florida, found his neighbor’s cat lying on the road in a pool of blood. The owner buried the dead cat. Five days later, the cat dug itself from its own grave.

So, Cornell, and the Zombie Research Society, the real best place to ride out the zombie apocalypse isn’t the upper Rockies or Australia, it’s anywhere but Florida.

Frank Drake on SETI: Let’s Shut Up and Listen