The Mysterious Kappa of Japan

The rivers and lakes of Japan are have long been the haunts of a wide variety of strange creatures of all shapes and sizes. Although many of these have been regulated to the realm of pure folklore and myth, there are others that have transcended beyond mere legend and become thought of as something more cryptozoological in nature. One of the most well known of these is a mysterious, bipedal water dwelling creature known as the Kappa, which has skyrocketed past its origins as local folklore to become legend, a pop cultural icon, and a genuine cryptic all at once.

The Kappa is one of many types of water imps long featured in Japanese folklore said to inhabit the lakes and rivers of this island nation. The appearance of the Kappa varies from tradition to tradition and area to area, however they are typically described as being the size of a child of 6 to 10 years of age and resembling a cross between a turtle, monkey, and lizard. Kappa are often depicted as having a shell on their backs, similar to a turtle’s, having large, webbed hands and feet, and having a beak like mouth which depending on the tradition may or may not contain rows of sharp, shark-like teeth. Some reports have made mention of patchy, scraggly hair covering the body as well.

One of the most prominent and odd features that is shared throughout all Kappa folklore is the presence of a bowl on the top of the head, which is said to contain a liquid that gives the Kappa its supernatural strength. When confronted by an angry Kappa, the best way to defeat it is to have it bow, upon which the liquid will spill and weaken it, allowing the typically formidable creature to be defeated.

Kappas are most often described as being malevolent entities, with a penchant for mischief and violence. They are said to molest women as well as harass travelers and challenge passerby to sumo matches. In the more sinister and darker tales, Kappa are represented as murderous monsters which attack humans, cattle, and horses, pulling them to their deaths below the water and sucking the blood or life force from their bodies to leave a lifeless husk. It is said that one should not venture to the water’s edge alone lest you be the victim of a Kappa attack. A rather gruesome detail of these attacks is that it is often mentioned that the creatures have a penchant for sucking a victims entrails out through the anus. 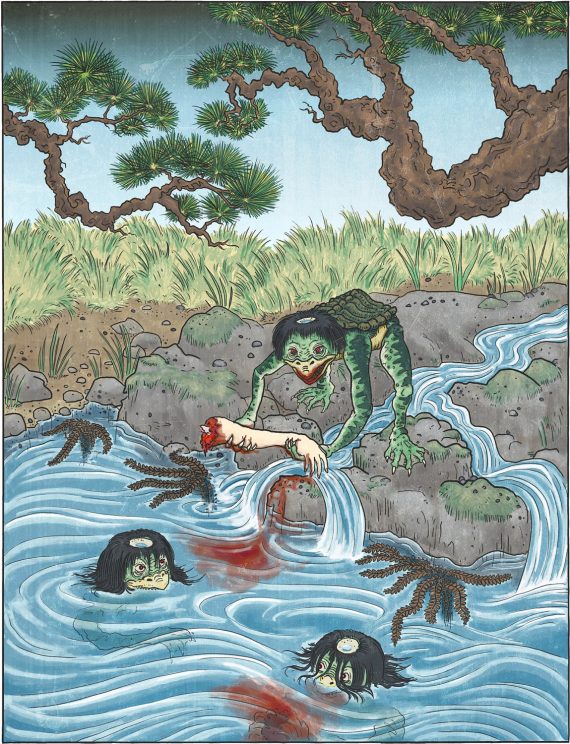 Despite this ferocious and rather unappealing image, Kappa are said to have a benevolent side as well. For instance, they are said to display a great talent for medicine and particularly bone setting, and it is said if a Kappa is captured it will offer its services to its captor in return for release. They may also take mercy on travelers that have been injured or are ill and nurse them back to help.

Kappa purportedly abhors metal and loud noises, and love cucumber to the point of obsession. This craving for cucumber is supposedly so strong that Kappa will do anything to get it, and in the past many residents of supposedly Kappa infested areas would carry cucumber with them in the hopes of bribing the beasts into leaving them alone or even procuring their medical talents.

Although the Kappa has become a very famous fixture within Japanese folklore, it is even considered by many to be a legitimate cryptid due to a good many eyewitness accounts and sightings of actual alleged Kappa that continue into modern times. Many areas in Japan still produce reports of Kappa frolicking in rivers, and there are even reports of them wandering about far from the water. These sightings come from witnesses of all ages and levels of society, and often from very credible sources. 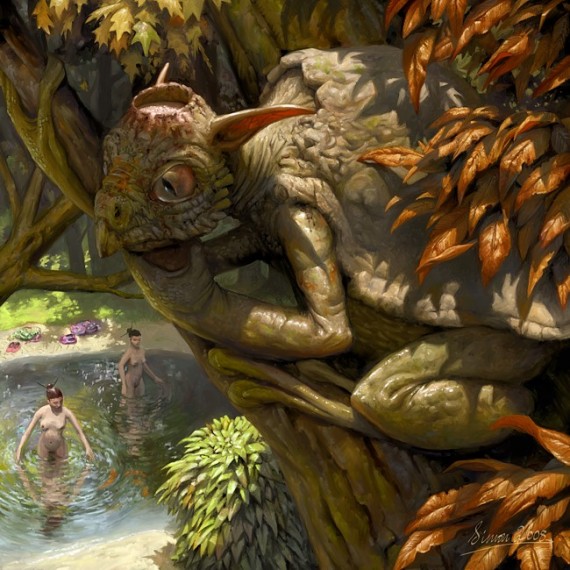 For instance there was one sighting in the 1970s made by two police officers who witnessed a hunched over form at the side of a country road during dusk. Thinking it was a small child perhaps lost or in trouble, the officers slowed down to approach it. As they drew closer, the form reared up and they could see that it was not a child at all, but rather a child sized creature that was reported as resembling something like a cross between a monkey and a frog, with large, piercing eyes. The account also mentions that the creature had prominent claws. The mysterious figure was reported as chattering in a high pitched voice before running briskly on two legs across the road into the brush. This report is significant since the sighting was made fairly far from water and showcases the creature's ability to walk quite well on land.

On some occasions, shaky photographic evidence has been brought forward. Several photographs of alleged Kappa and even video footage have made the rounds over the years, but they are blurry and of generally poor quality. There has also been sparse physical evidence for Kappa, including footprints, hairs, and even slime allegedly exuded by the creatures. Some shrines contain the purported mummified hands or even bodies of Kappa, although they have never allowed anyone to analyze these specimens.

There are various theories on what could be behind stories and sightings of the Kappa. Perhaps the folklore originated with the practice of discarding stillborn infants in rivers. In rural areas, poor families sometimes went about the grim work of killing infants because they could not afford to raise them. These bodies were then tossed into the river and were known as “leech babies.” Tales of Kappa may have subsequently arose from these floating bodies being mistaken as water imps or from stories parents told their children to scare them into staying away from the river where they might see the bodies, sort of a “boogie man” for ancient Japan. 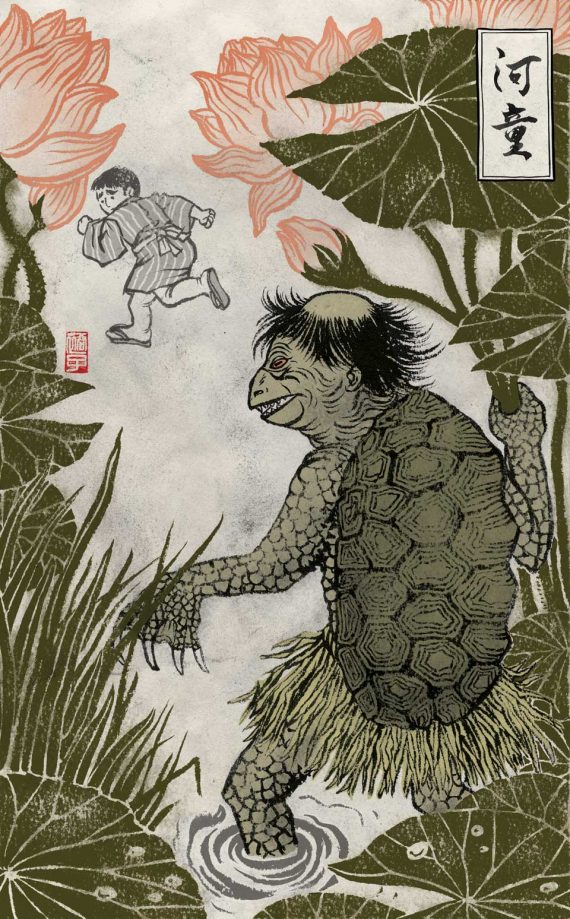 Another theory is that Kappa were actually monkeys bathing in rivers. Japanese macaques (macaca fuscata) are terrestrial Old World monkeys native to Japan, and they can be found throughout the country. These monkeys have no aversion to water, and will often bath in rivers or lakes. In some areas they are known to wash their food in the water or even soak in hot springs during cold weather. Many of the mannerisms Kappa display in sightings reports are comparable to some sort of monkey, and Kappa are also allegedly known to make vocalizations, squeals, and howls similar to primates.

However, could Japanese macaques be responsible for Kappa sightings? It seems unlikely considering that Japanese macaques are quite common in many areas and are familiar to most Japanese. It does not seem a probable explanation that such a well known animal could be consistently mistaken for a Kappa to the point that it could account for any significant amount of sightings reports.

Yet another hypothesis ties the emergence of Kappa folklore to the appearance of Portuguese monks in Japan in the 16th century. The monks, with their robes, hoods hanging in back resembling a shell, and shaved pates ringed by hair reminiscent of a Kappa’s water filled head cup, could certainly be seen as having an influence of the appearance of Kappa. It is also believed that Kappa sightings could be misidentifications of the Japanese giant salamander, which is native to the rivers here.

Or maybe the Kappa are something else entirely? Is there a chance that a real unknown animal could be at the root of these legends? If there were some sort of primate involved behind the Kappa phenomenon, then it could be perhaps a new species of monkey or even a hominid of some sort. Could the Kappa be a new type of miniature hominid adapted to a more aquatic lifestyle? Considering the amount of reports of small hominids scattered throughout Oceania, perhaps such a creature ended up on the Japanese archipelago as well, and through adapting in isolation might have ended up like something akin to what we see in Kappa reports.

Whatever they may be, Kappa have become one of Japan’s most famous and enduring creatures. The Tono Valley, located in the earthquake devastated Iwate prefecture, is an area well known for its rich local history of folkloric creatures, but in particular it has become famous for its Kappa. The Tono area has long been known as a place crawling with Kappa, and is home to what is known as the “Kappa Pool” or “Kappabuchi,” which is part of the Ashiarai stream, near a temple known as Jokenji. The stream, and in particular the pool, has been known for centuries as a haunt for Kappa. 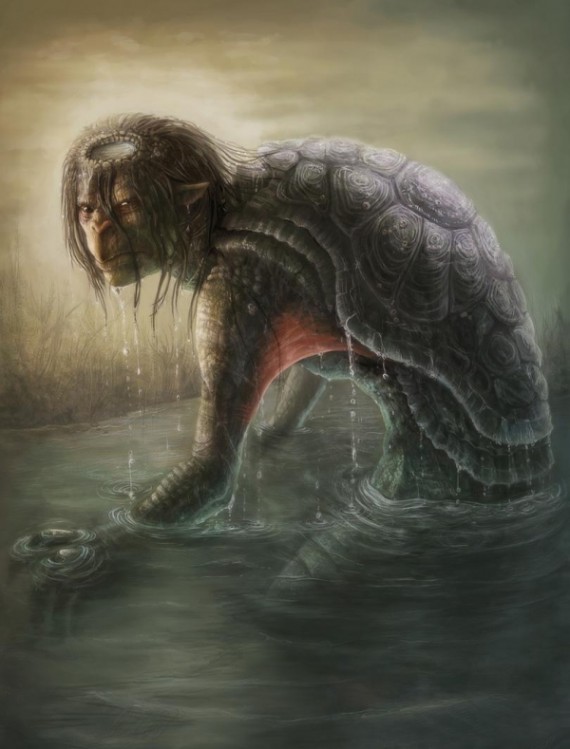 In 1910, a well-known book written by folklorist Yanagida Kunio was published called Tono Monogatari (Legends of Tono). The book features numerous supernatural entities from the Tono area including the Kappa and of course the Kappa pool. It was this mention of the Kappa that is widely credited with launching the Kappa from what was once an obscure local legend into nationwide popularity. As a result, Tono has basically come to be known as the birthplace of the Kappa legend in Japan. Incidentally, Yanagida was a proponent of the idea that monkeys were behind the stories of Kappa.
To this day, the Kappa pool in Tono is a tourist attraction in the area. Visitors come to enjoy the area’s tranquility and in the hopes of seeing a Kappa in the flesh. On the bank of the stream, you will find a shrine dedicated to Kappa. The shrine is often visited by pregnant women, who worship there is the hopes of producing abundant milk for their infants.

The Tono Tourism Association is also the only place in Japan that issues an actual “Kappa catching license.” For any would be Kappa fisherman out there, the best way to catch one is said to be with a fishing rod. The bait? Why, cucumber of course.

Is the Kappa merely folklore? Is it a mammal, reptile, or some kind of amphibian? Is it just a giant salamander? Could it be a macaque, a new kind of primate, a proto-pygmy, or miniature hominid, of some sort, or something else entirely? Whatever it may be, stories and sightings of the Kappa endure to this day and it remains entrenched as one of the mysteries of Japan's rivers.

A Look at Michael Talbot’s The Delicate Dependency: A Novel of the Vampire Life