The UFOs Keep Coming to St. Helens and Merseyside

The town of St. Helens in Merseyside, England, has in the past been known for mining and glassmaking but lately it’s becoming recognized as one of cities in Merseyside that have been visited repeatedly by UFOs. The latest sighting occurred recently above the town center and was captured on video. It's one of over 30 sightings since 2000 in Merseyside. Are aliens coming to visit where The Beatles got their start?

This UFO was spotted by St. Helens resident George Hunter.

It was just after midnight and as I looked through the kitchen window I saw some very bright lights in a triangular pattern quite high in the night sky. I filmed the lights and zoomed in on them, but I only managed to get a short clip as the lights moved out of shot as I was filming them. They were very fast and gone in less than a second, it was almost like something out of Star Trek moving at warp speed.

Hunter described the size of the UFO as “massive” and observed that it was “completely silent.”

St. Helens has been visited by UFOs before. In 2009 there were numerous reports of UFOs over the city in July and October. In September 2014 this UFO was seen hovering for almost a minute over a field before leaving quickly.

This video was taken over a St. Helens factory in 2012.

That's just some of the UFOs visiting St. Helens. This map shows the locations of many of the 30 UFOs in Merseyside reported to the Ministry of Defence over the 10 year period between 2000 and 2009. 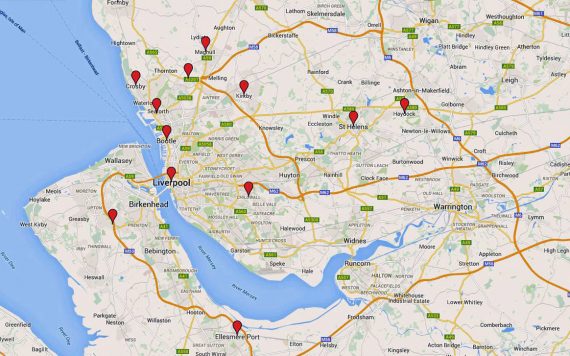 Is something attracting UFOs to St. Helens and Merseyside? Are people there more attentive to the skies and quicker with their cell phones and cameras? Or are aliens just trying to get to Liverpool, the birthplace of The Beatles and the location of at least 10 sightings in that ten year period? After all, they did sing about their words flying “across the universe.”