The Unexpected Weirdness of Exploding Rocks and So Much More

You know what rocks are, right?  Of course you do, what a silly question.

Rocks are natural solid aggregate formations of one or more minerals or mineraloids, at least according to Wikipedia.  Earth’s lithosphere is made of rock, hence their common abundance in mountains and caves, as well as in your shoe, and anywhere you want to dig a hole.

Rock is and always has been one of the most important features of this planet, with respect to our survival; from tools, to building materials, to invaluable manufacturing processes, we need rocks more than they need us.  Because of that close relationship, there isn’t much we don’t know about rock.  We know how it forms.  We know all the different kinds of rock (at least on this planet).  We know how to dig it up, break it into smaller pieces, and we know all kinds of neat things we can do with it once we’ve gotten our hands on it. But…!

I guarantee there are some things about rock that you don’t know.  Yet.

There’s a key word in that definition I gave you above: solid.  Of course, there’s more than one way for a thing to be solid.  A small flake of stone is solid.  It’s arguably just as solid as a massive boulder, if not a great deal lighter.  It’s a defining principle of nature that every child learns the first time someone throws a pebble at them on the playground.

Except, there are flexible rocks.  I know!  It blew my mind too!

There are a few different kinds, but the best known is a yellow sandstone called itacolumite.  It’s found mostly in Brazil, but also at a few locations in India and the US.  And it is, as mentioned, flexible.  If a slab of itacolumite of the right proportions is elevated with support at either end, it will sag in the middle under its own weight.  Amazingly, if the slab is then flipped over, it will straighten and then sag in the opposite direction.

Like any sandstone, itacolumite is composed of silica sand and quartz – often very fine grained silica – with plates of mica mixed in.  The reason for its unusual flexibility isn’t agreed upon, but it seems to be related to moisture (since the stone is very porous) and interstitial substances that allow the particles to maintain a bonding contact while the displacement occurs.  It was once believed that the mica inclusions were responsible for the elastic properties of this rock, since mica itself has these properties, but there are examples of flexible itacolumite that are mica-free.

This may seem counter-intuitive to you, but all rock is flexible to a certain point.  In fact, different stones measure different values when tested for indentation hardness (as opposed to scratch hardness, which is the main scale used to grade diamonds and other minerals).  Typically, the indentation hardness of a material like stone decreases with smaller and smaller particulate grain size, meaning that less dense stone generally has greater flexibility.  It’s just that most stone has so little flexibility you’d need special equipment to see it.

That’s not the only weirdness going on in the world of rocks.  How about glow-in-the-dark rocks?

No, I don’t mean the ones you painted with that cheap novelty paint, put in your garden, and were almost instantly disappointed with.  I mean minerals that naturally fluoresce.  Again, there are several kinds, but they all have something in common.  They contain trace amounts of elemental impurities called activators, which are materials that have the curious capability of absorbing small amounts of light, rather than reflecting it.  Then shortly after, they emit a small amount of light of a different wavelength.  And different wavelengths of light are perceived by our eyes as different colours (providing we can see them at all).  Some gemstones have this property too; ruby, opal, and even some diamonds can fluoresce and become even more dazzling than they are in the jewellery store showcase.

Unfortunately, these rocks usually require a source of UV light to put on their show, but if you have a black light left over from the ‘80s, you could deck out your bedroom with freaky glowing rocks, if you felt so inclined.  I won’t judge. 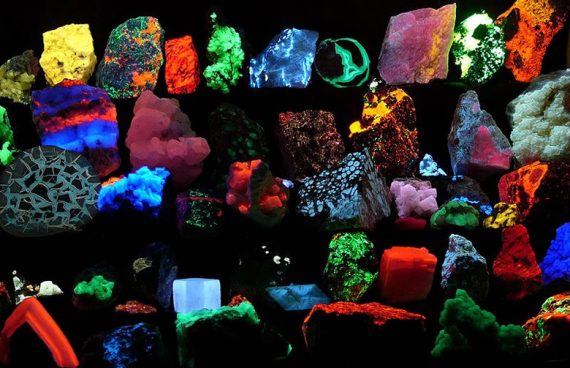 Now we come to perhaps the weirdest rock factoid yet: exploding rocks.  Never mind rocks that look like waffles, or stones with live frogs trapped inside them, here we have exploding rocks!  OK, maybe they aren’t the weirdest, but they come close.

There’s actually two different kinds of exploding rock.  The first is the product of a weathering process called explosive rock exfoliation.  It’s what happens when curved slabs of rock wear thin and spontaneously splinter, producing a loud pop sound and scattering bits of rock about.  Larger examples can seem quite violent when standing next to them.

The second type of exploding rock is pretty cool, and it’s much more bomb-like.  It happens in warmer locales, when prospectors and diggers pull up rocks buried deep under the topsoil.  Once exposed to surface heat, those rocks – rocks that had been in a relatively cool and wet environment underground – rapidly warm up and begin to literally explode, jumping off the ground and emitting a loud pop sound when they do.

Researchers believe this is caused by small amounts of fluid trapped inside the quartz heating up and expanding, ultimately causing the rock to crack.  If this happens fast enough, the crack turns into an explosion.  Imagine working away in a hole, looking for rare earth metals, and suddenly the rock next to you bursts into a million pieces without warning.  Yeah, that would freak me out.

It’s a weird, weird world we live in, and it’s only getting weirder.  The next time you find a pebble in your shoe, or dig a stone out of your garden, be sure to check and see if it bends, glows, or explodes before you discard it.