There Be Dragons Here! Blue Ben and England’s Limestone Pavement

There are some pretty incredible things in this world.  Never mind technology, and medicine, and art, and all the other stuff humans do.  Don’t even worry about the fantastical stuff humans make up, like gods and ghosts and monsters of all kind.  The natural world is rife with examples of weirdness that would truly blow your mind.

One of those amazing things is stone.  No, not the pebbles you find in your garden, I’m talking about geological formations that are so strange you can scarcely believe they were made by Mother Nature.

The Waffle Rock of West Virginia is one such formation.  That’s a little known gem hidden in the wilds the Appalachian Mountains, it’s a huge piece of granite with hematite concretions formed on one side that give it the look of a giant waffle.  For a long time it was thought that it couldn’t be a natural formation, that it must be the work of some unknown artist, or maybe it was the fossil of some great beast with scaled skin.  But alas (at least for the storytellers among us), the waffle rock is indeed completely natural, and in fact, isn’t as unique as one might think.

The Giant’s Causeway on the coast of Northern Ireland is another incredible example.  This is a field of interlocking geometrically shaped stone blocks (actually columns) that serve almost as uneven steps from the cliff side all the way down to the sea.  To look at the columns, the tallest of which are about 12 meters high, one has great difficulty not seeing them as a man-made structure (or giant-made, as it were), but they were in fact formed by an ancient volcanic eruption.

A particularly interesting example of a strange and wondrous geological formation is the limestone pavement of Kilve, which is a small town near West Somerset, England.  It is, as the name suggests, a limestone formation that has taken on the appearance of pavement.  There are a few sites in Kilve to boast such formations, most of which are on the coast and on beaches, and there’s some fun folklore than goes along with it.

As with any other odd stone formation, people are wont to explain it, and usually in very imaginative and colourful ways.  Kilve is no different.  Some have suggested that the surprisingly smooth causeway that leads into the ocean’s depths, was once a road and perhaps led to a lost village somewhere off the coast.  It’s even been suggested that such a roadway could have led to the lost continent of Atlantis.  Though, those are pretty far fetched ideas.

Others though, have come up with an explanation befitting the traditions of Great Britain.  Dragons!

There is a folk tale in the region of Somerset, it’s the tale of Blue Ben.

It’s said that there once was a massive blue dragon who lived in the shale caves along the coast.  Being a fire breather, he would cool himself in the nearby waters on warm summer days.  But his size was a problem on the mud flats that bordered his home; he feared to get stuck in a mire.  And so he built himself a causeway of limestone through the mud to provide easy passage to the sea.

It’s said that one day the devil discovered Blue Ben’s lair, and the evil one enslaved the great beast, riding him like a steed through the fires of Hell.  The devil kept his prize until the dragon escaped in a fury and hurriedly made his way back to the safety of his cave.  Forgetting about the mud flats in his haste, Blue Ben became stuck, struggling to pull his great weight onto the causeway.  Finally, exhausted and defeated by his ordeal, the dragon slowly succumbed to death, and over the eons his carcass became a massive fossil on the beach.

There’s actually a thread of truth woven into that folk tale, believe it or not.  Sometime in the early 19th century, when the small towns surrounding Somerset were beginning to blossom and stone was needed for building material, the Blue Lias shale (which is a limestone formation of loose, flaked stone) near Kilve was turned into a working quarry.  Shortly thereafter, the fossilized skull of a massive dinosaur was found amongst the stone.  It turned out to be that of an Ichthyosaur some 245 million years old and is now proudly displayed in a museum in the nearby town of Wells. 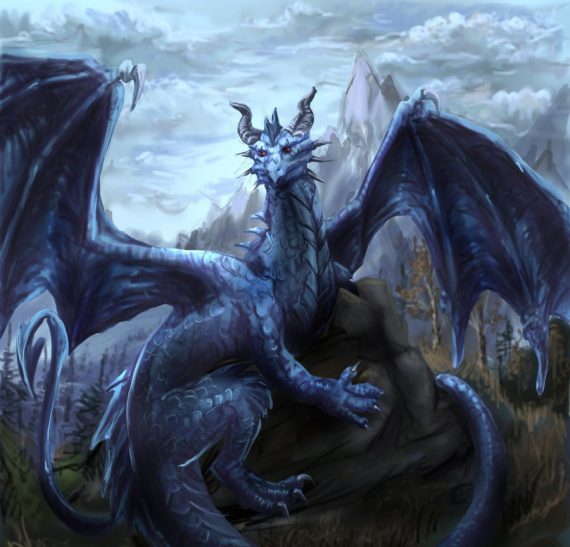 Of course, the meaning behind the discovery of a great beast in the same area where the legendary Blue Ben was said to have perished was lost on no one, and thus the folk tale persists.

There are two things to be aware of though.  The first being that the area of West Somerset has yielded a great many impressive Ichthyosaur fossils, some nearly complete.  As with other shale deposits around the world, this region offers a bounty of paleontological material.  This would either suggest that Blue Ben wasn’t the only dragon wandering those parts an age ago, or that the region was home to a number Ichthyosaur during the mid-Triassic period.

The second thing to be aware of is that limestone pavement is a somewhat common geological formation found all over the coastal regions of Western Europe.

Limestone pavement is formed by receding glaciers scraping the surface of the rock leaving a relatively smooth and flat surface behind.  Also known as alvars, these formations eventually form into slabs called clints.  This is because limestone is slightly soluble, and so when rainwater gathers to drain away along cracks and joints, the gaps become deeper and wider.  The highly picturesque result looks, of course, like someone long ago purposefully laid down hewn slabs of limestone.

As entertaining as the tale of Blue Ben is, and as romantic as it is to envelope one’s self in folklore and myth, eventually one must come to terms with the facts of the situation.  Mother Nature is the most prolific builder who’s ever existed.  Her works span the globe (actually her work is the globe, but tomato/tomahto), and is ever wondrous compared to the paltry feats of man.  It stands to reason that she has more mysteries in store for us as we continue to explore our world.

Survivors – Wiping Out The World