People with an active interest in the UFO phenomenon are always confronted by one sobering realization: That only a small percentage of actual sightings may defy a common explanation. The numbers vary according to what sources you consult, but it's generally accepted that between 90 to 95% of all the reports are the result of mundane misidentifications of atmospheric phenomena, celestial events or man-made objects; which leaves only 5 to 10% that could be considered "true unknowns."

Those figures could shrink dramatically in the coming years though, due to the coming proliferation of unmanned aerial vehicles (UAVs) aka 'drones', which seem to be at the brink of invading our airspace --not to mention our personal privacy. Discarding the 'fad factor' and all the silly PR gimmicks which are bound to fail --Tacocopter, srsly?-- there's no denying the technology's potential to radically disrupt many aspects of our everyday life, from product delivery to even search and rescue operations. The drones are coming, and they're coming in hard.

As a result of this, there seems to be an increasing tendency to explain UFO sightings as drones, either caused by an innocent misidentification or a deliberate hoax. Sure enough, there's already been a couple of instances in which a drone was used with the intended purpose of fabricating a UFO sighting.

Does this mean commercial drones are to become the 'swamp gas' of the XXIst century? I think that in order to prevent that, we in the UFO community must arm ourselves with enough information about the technical and aerial capabilities of these novel machines.

For starters, we need to be aware of the fact that the flight time and distance range of most rotor-based aerial vehicles --i.e. quadcopters, hexacopters, octocopters and so forth-- is extremely limited. These limitations are the result of 2 main factors: The Batteries powering them and the radio link between them and the controls by which an operator maneuvers the drone. More batteries amounts to more added weight which wouldn't really solve the problem, not to mention that it would also limit the drone's potential payload they can carry.

Toy drones --like the ones you could buy at a hobby shop for under US$100-- are barely able to stay airborne for 10 minutes or less; they also need to remain within visual distance of its operator, lest they fly out of control and crash.

What about professional drones, then? There are still only a few commercial areas for which the employment of UAVs makes economic sense, with aerial photography being by far the most popular one. Thanks to drones carrying either still photograph equipment or movie cameras, even amateur film-makers working under a tight budget can enjoy the chance of adding the type of wide-range, high-altitude shots which just a few years ago were exclusive of Hollywood-level movie projects. The capabilities --and price range-- of aerial photography drones can vary considerably, but overall most of them have a flight time of less than 30 minutes; not to mention that the weight of the camera can significantly shrink those numbers. Below is a comparison chart I made of the most popular models in the market: 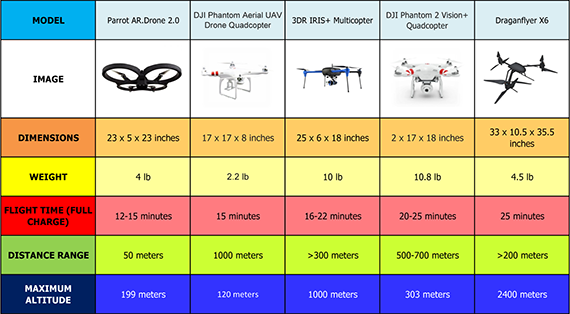 What is it I'm getting at, you may be asking? My point is simply this: That if a UFO sighting lasts more than half an hour, chances are it's NOT a drone.

Let's take this UFO sighting as an example: The video was taken last month in the city of Lima (Peru) and was captured by a professional camera man during a live broadcast of the TV program "Alto al Crímen."

When I linked this news at The Daily Grail, one of our members suggested that it could be a drone, used to supervise the construction of a nearby building. The main problem with this theory, though, is that according to Lee Spiegel's article "[e]yewitnesses reported seeing the aerial object for up to two hours [emphasis mine], and yet, no video has emerged showing how the UFO left the scene."

2 hours is way above the flight time capabilities of commercial drones. Does that mean this was a bona-fide UFO --read "non-human"-- hovering over one of the biggest cities in South America? No, but it does mean we still need to find a better explanation for this sighting.

In the United States, the agricultural sector has also found the benefit of employing drones for the purpose of aerial surveillance and data gathering. Because of this the UAVs fit for this kind of job need to have a longer flight time --which in result significantly increases their price-tag.

Here once again, most of these drones can barely pass the 30-minute flight time barrier.

Another interesting field of drone use is LIDAR mapping. This employs the use of laser pulses which can reveal features in the terrain which may be concealed by vegetation. But because of the weight of these sophisticated sensors, the drone's flight time is reduced by half --from 35 minutes to just 15. 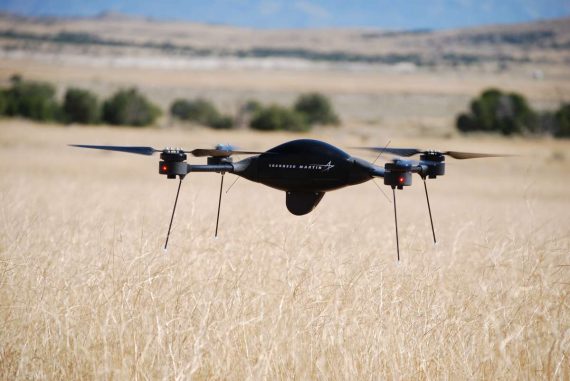 The only rotor-based UAVs that can surpass the 60-minute barrier are gas-fueled, and they all look like miniature helicopters --i.e. unlike the more 'saucer-like' quadcopters or octocopters. From these, the one model I did manage to find which had an above-average flight time of 40-45 minutes was the Quad Indago by FI2; when I was reading its technical specifications --and trying to make sense of them as best I could-- I was interested to learn how this drone "[...] comes equipped with the Lockheed Martin Procerus Technologies’ Kestrel 3 autopilot, and is capable of autonomous landing."

Lockheed Martin, as we all know, it's one of the biggest government's air-space contractors, and it's also the company who developed the triangular-shaped RQ-170 Sentinel: A drone equipped with stealth technology. Which forces us to entertain a theory brought up by both skeptics and a few 'true believers' alike: That secret black-budget UAV programs are being mistaken for UFOs. These theories began to gain a lot of traction after the irruption of drones in the battlefield, and people like Norio Hayakawa have suggested that the 'saucers' Bob Lazar and his friends were observing over the night sky of Area 51, were in fact earlier prototypes of modern drones.

The testing of experimental craft --be they manned or unmanned-- over a (then) secret Air Force facility I have no beef with --after all, that's what Area 51 was for. But the testing of secret projects over populated areas has always been problematic to me for several reasons, one being the potential hazard if the craft malfunctions --that's why they're called 'experimental', right? Besides, if the Air Force was testing or is still testing UAVs capable of hovering over a given area, then we must assume these are rotor-based, and the curse of all rotor-based craft has always been the fast consumption of fuel in order to stay afloat, bringing us once again to the flight time problem.

We could assume the government contractors, working with generous and unregulated funding over many years, have managed to solve this seemingly insurmountable problem thanks to a revolutionary improvement in electric batteries, or due to some sort of exotic energy system; but if you're jumping into that wagon just in order to find a more 'sensible' explanation other than alien craft from other planets or God-knows-where-else, only do so with the knowledge that you're falling into the same trap skeptics are always criticizing the 'true believers' for: Trading one unknown for another. Hope the tinfoil hat fits comfortably over your head!

To clarify my position:

It's also not my intention to 'demonize' drones. On the contrary, I think the technology has the potential to improve many aspects of our lives in ways we're still beginning to fathom. Who knows? It may very well be that once our airspaces are inundated with drones of every kind, shape and purpose, the UFO phenomenon will morph once again in order to still catch our attention. Perhaps this is best illustrated by this video in which a drone manages to record a fast-moving UFO.

Assume nothing, and keep looking up!

The Eerie Enigma of Cicada 3301