Report From Ceres on Lights, Structures and Obama’s Face

We’re finally getting some better photographs (as far as photos from NASA go) from the Dawn space probe that’s been orbiting the dwarf planet Ceres since March 6. Everyone has been waiting for more information on those two mysterious lights spotted in early transmissions back from Dawn. The new pictures shed a little light on the little lights and bring up more questions under magnification. And then there’s that image of President Barack Obama’s face on the surface. The what?

The images released this week are enhanced color views of the surface taken by Dawn from about 28,000 miles (45,000 km) away. The images taken through blue, green and infrared filters were combined to create a surface map. NASA says the color differences will help identity the materials that make up Ceres. Yeah, yeah, yeah … what about the spots?

NASA named the spots (pictured at top) 1 and 5 (no word on 2, 3 and 4 – a cover-up to be investigated later). Their thermal patterns are different – 1 is cooler in temperature than 5. It’s previously been observed that the spots change intensity, getting brighter during a Ceres day and darker at dusk. This lends credence to the prevailing theory that the spots are ice reflecting sunlight. NASA says it will know more when Dawn takes more photos on April 23 from a distance of 8,400 miles (13,500km).

Or you could just magnify the current photos. If you do that, you see square images that some say look like buildings or structures. And those red and green lights next to them … parked vehicles?

The image of Obama has been floating around for a few weeks now. It comes from an animation compiled by NASA showing Ceres rotating. 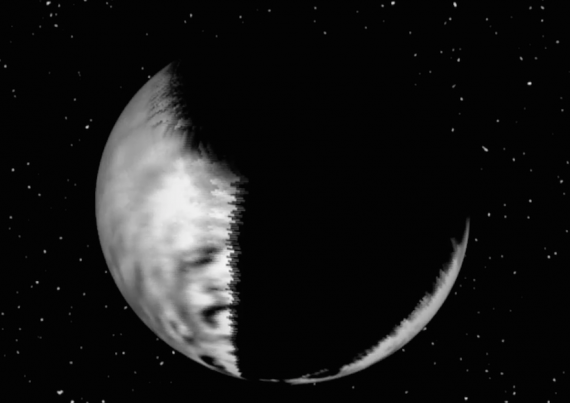 If you take the unusual shadow next to the dark spot and pair it with its mirror image (and squint real hard and click your heels), it looks kind of like President Obama. 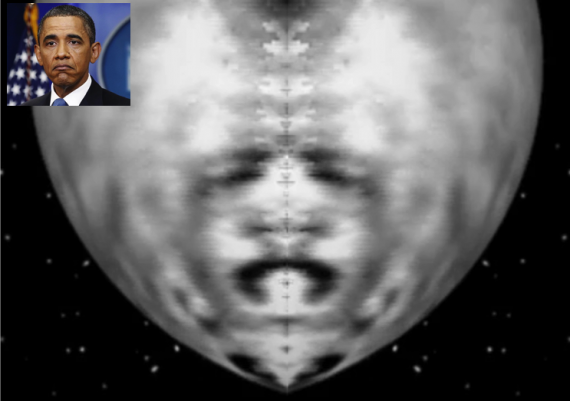 No word yet from NASA on the image or that mysterious dark spot covering part of Ceres.

So far, so fun. The colorized images are interesting but inconclusive. Let’s hope the next photographs from Ceres tell us more about the bright spots and the dark shadows.

Exodus: Lookin’ Pretty, But Dumb as a Rock