The Man They Could Not Hang

What is luck? Is it some definable, measurable quality like our IQ, height, or shoe size? Is it the influence of some higher power? Or is it merely a series of happy coincidences masquerading as something more? When a person stares death in the face and miraculously comes out unscathed, is this luck, mere happenstance, or perhaps even some sort of divine intervention? There have been countless people who have narrowly avoided death in such a way as to make us ponder such questions, and certainly one that has become well known over the years is the curious case of a man that was sentenced to death by hanging, yet was mysteriously and inexplicably unable to be executed; a series of events that would give him the unshakeable nickname of "The Man They Could Not Hang."

John Henry George Lee, also known more notoriously as John 'Babbacombe' Lee, was born in 1864, in Abbotskerswell, Devon. He served in the Royal Navy, but accrued for himself a rather unfortunate reputation as a thief. For awhile, his altercations were merely low level cases of basic thievery, but it was not long before things graduated to full blown, brutal murder. In 1884, Lee was employed as a footman at a sprawling estate known as "the Glen," in Babbacombe, Torquay, under his employer, a rich and elderly spinster by the name of Emma Keyse at her home. Mr. Lee had worked at Ms. Keyse's home before joining the Royal Navy, and after he had gained a medical discharge from the Navy and had served 6 months in prison for theft from another employer, he resumed his work at the manor. In November of 1884, Ms. Keyes was found brutally murdered in the wake of a house fire, her corpse stuffed within a pantry with her throat slashed and exhibiting evidence of severe blunt force trauma to the head. There was also oil everywhere and the body was surrounded by charred paper.

At the time, police immediately homed in on Lee, as he had been the only male servant on the premises at the time of the crime, he had a criminal record, and he had had an unexplained cut on his arm at the time. The evidence was fairly flimsy at best, yet nevertheless, Lee was arrested and subsequently convicted for the heinous crime. Lee proclaimed his innocence to the last, but was still sentenced to hang for the murder, with the motive being stated as his dissatisfaction with a pay cut he had received for unsatisfactory work at the estate. Despite his constant claim to innocence, a jury found Lee guilty and he soon found his days numbered. He was sentenced to be hanged at Exeter Prison on 23 February 1885. Throughout his time on death row, Lee continued to proclaim his innocence to anyone who would listen and claimed to have vivid dreams of his execution failing. In an effort to beat the charges, he even tried to point the finger at his half sister, who had been working as a cook on the same premises at the time, claiming that she had been trying to cover for a lover who had visited her on the night of the vicious murder. All of these efforts were in vain, and Lee waited as the days ticked by to his demise.

On the day of the execution, Lee made his way up the stairs to the scaffold and had the noose secured around his neck by executioner James Berry. Lee's head was covered with a hood and he silently and calmly awaited his inevitable demise. What must be going through one's mind in that moment on the cusp of death, right before that final "click" of the trapdoors brings final blackness to the world? Is it a review of the memories of one's life? The regrets of a lifetime that has passed or the wistful hopes of a lifetime that will never be? Or is it just the confused ramblings of a mind about to be wiped out from existence? Whatever it was, it was no doubt flowing through Lee's head at that point, but when the lever was pulled to open the trapdoors and send him to his death, they failed to open. The click and drop that should have ended his existence failed to bring the oblivion that was promised and Lee remained very much alive, standing in confusion upon the gallows. The executioner, Berry, halted the proceedings and did an inspection of the trapdoor mechanism but it was found to be in perfect working order. When Lee was pulled aside, the trapdoors opened just as was intended. In fact, several test runs showed it to be working perfectly. Lee was repositioned upon the gallows and awaited his execution once again.

Again, the lever was pulled and the trapdoors failed to open, leaving the horrified Lee no doubt pondering at what point his final release from this life would come. The baffled executioner, Berry, once again checked the mechanism and found it to be in pristine, working condition. Lee was brought back to his cell while a full investigation was made into the faulty hangman's door. A mechanic was brought in to try and fix the door, after which it was tested with a heavy stone meant to emulate a man's weight and it worked just fine. Lee was brought out once again to serve his sentence and a third time the lever was pulled, but yet again, the trapdoors failed to open, leaving the accused standing upon them wondering when the extended prelude to death would come to an end. After three failed attempts to execute him in front of droves of shocked and bewildered witnesses, Lee's sentence was finally commuted to life in prison by Home Secretary Sir William Harcourt, who famously stated "It would shock the feeling of anyone if a man had twice to pay the pangs of imminent death."  It was an unprecedented series of events, and John Henry George Lee became known as "The Man They Could Not Hang" in various news outlets.

Many theories were advanced as to why they could not hang Lee. The official report concluded that the mechanism of the trapdoors that day had been improperly aligned, possibly due to damp weather at the time, and that they rested in such way as to prevent the doors from opening properly when weighted. However, others hailed the occurrence as a miracle; divine intervention on the part of an innocent man. Other rumors and theories brewed as well in the wake of the failed hangings. Some believed it was the work of black magic, while others believed that the hangman himself had been bribed to botch the execution. It was also suggested that prison mates in league with Lee had intentionally fixed the trapdoor so that it would not open when weighted by someone standing atop it. To this day it remains a mystery as to why the trapdoors continually failed to open even after extensive inspections and repairs on the device.

Even after his conviction and subsequent failed hanging, Lee continued to petition his innocence as he served his prison sentence. While Lee served his time, suspicion fell upon Reginald Gwynne Templar, who was a frequent visitor to the Glen, and had even served to represent Lee in court, after oddly offering to do so on the morning after the murder, even though Templar had been a friend of the victim. It was believed that he had perhaps committed the murder and then tried to pin it on Lee through an intentionally fumbled handling of the case in court, getting Lee convicted on weak evidence. Templar eventually lost his mind, being committed to an insane asylum and ranting about murder until his early death. Lee would go on to claim that Templar had also been in the house at the time of the murder, adding fuel to speculation that perhaps he had been innocent after all and that he had been spared by higher power during his failed execution. 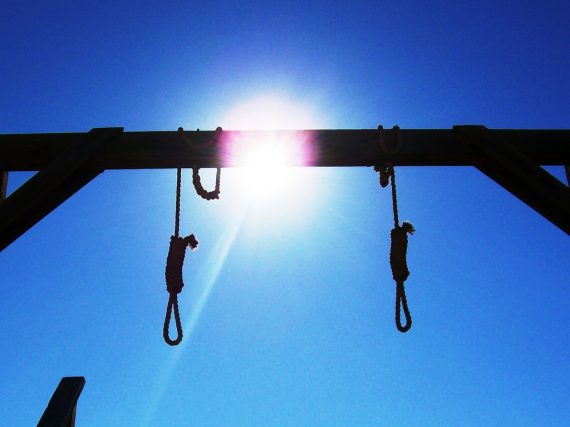 Lee, already hailed in the public consciousness as "the Man They Couldn't Hang," served 22 years in prison and was finally released as a free man in 1907. He was not shy about exploiting his notoriety, and made money lecturing about his life, selling his story to a major newspaper, and becoming a minor celebrity. There was even a silent film supposedly made about his story in 1925 called The Man They Couldn't Hang. Other than that, it is not certain what became of him after his release from prison; a situation made even murkier by the fact that in later years several men would step forward claiming to be Lee, perhaps to cash in on his fame. It is mostly said that he married a dressmaker from Grafton Terrace, Ellacombe, by the name of Kate Farmer, after which he found work at the Tavistock workhouse during World War II and eventually died of a heart attack in 1945; a rather mundane end to such a legendary defier of death. He was supposedly buried in an unmarked grave in Forest Home Cemetery, Milwaukee, but there are some that claim this is not the grave of the real John Lee. Many have claimed that he in fact had left England's shores to forge himself a new, anonymous life overseas far from his homeland, with reports claiming that the real Lee died in places as varied as the United States, Australia, Canada, and England, only adding to the mystery of this already enigmatic figure. Whatever really happened to Lee remains a mystery.

How exactly did John Henry George Lee dodge a most certain death on a gallows that was in seemingly perfect working order? Was it luck, divine intervention, the result of sabotage, or just mere mechanical failure? Did he end up fulfilling some purpose or approach life with a renewed vigor after staring death in the face and coming out unscathed? Or did he waste away in frivolous pursuits the final years that he had cheated death out of? Whatever the reasons, and no matter what his inevitable fate may have been, Lee has and always will be known to most as "The Man They Couldn't hang."