The Strange ‘Singing’ Glaciers of Greenland

In the natural history of our world, mysterious sounds have been reported for as long as there have been those to document the oddities that break the normalcy of the everyday.

From virtually every continent, sounds ranging from subtle "hums" or rumbling occurring off in the distance, to sudden, explosive "booms" have been widely documented; among the more recent reports of the latter, loud crashes accompanied by bright flashes of light were reported in a flourish of social media posts around Eureka, California, on April 20, 2015. Many claimed, in addition to the bright flashes that were seen with the noises, that the crashes managed to set off car alarms in their neighborhoods as well.

In Greenland, one of these eerie "mystery sounds" has been known for decades by the name “Ton der Dove-Bai.” It was documented in August of 1932 by a French Expedition exploring the Scoresby Sound, and was described by the explorers as sound similar to a massive foghorn some distance away. Previously, it had been heard by another group on eight separate occasions, spanning five locations, and both during daylight hours, and well after polar nightfall.

The mystery noise was described thusly by researcher A. Dauviller in the journal Nature in 1934:

“During the month of August, 1932, when setting up the French Expedition of the international Polar Year in Scoresby Sound, on the East Greenland coast, some of my colleagues and I heard four times the mysterious sound called by the late A. Wegener the ‘Ton der Dove-Bai’. The sound was head in the morning, generally at 11 a.m. (G. M. T.), and also during the afternoon. It was a powerful and deep musical note coming far from the south, lasting a few seconds. It resembled the roaring of a foghorn. After that it was not heard during the course of the Polar Year. A. Wegener and five of his companions heard it eight times in five different neighboring places, both during the day and the polar night. It lasted sometimes a few minutes and Wegener ascribed it to the movements of inland ice. In fact, it seemed, in Scoresby Sound, to come from beyond Cape Brewster, precisely from the part of the coast where the inland ice flows into the sea from the large glaciers.

One theory about the sound is that it could, in likelihood, be a variety of cryoseism, or "ice quake". This, as had been suspected much earlier by A. Wegener, as cited above, would occur as a result of glacial movements. In fact, scientific data now exists, having been collected in the decades since the French expeditions in the early 20th century, which suggests the frequency of this phenomenon might even be increasing, in conjunction with rising temperatures recorded around the world.

Researcher Tom Irvine discussed such "Ice Quakes” in the June, 2006 Vibrationdata Newsletter. According to Irvine, geophysicist Göran Ekström's studies of low-frequency seismic signals originating from within Greenland's glaciers indicate that seismic waves are recorded mostly during warmer temperatures in the summer months, when portions of glacial ice are melting. 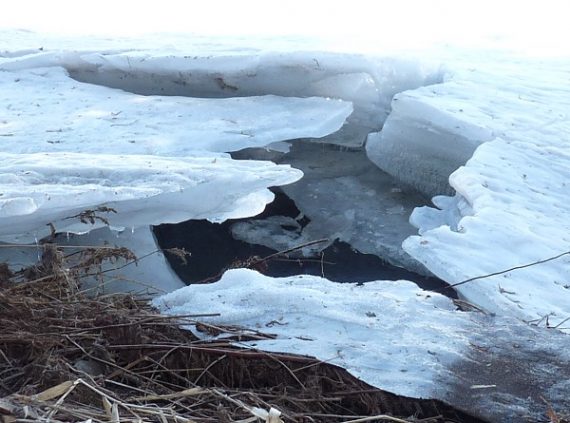 Ekström and his colleagues, "suspect that liquid water is pooling underneath the glacial ice to the point that the thin layer of water at the glacier's base allows the whole ice mass to slip slightly. The water provides lubrication." From here, the vibrations produced by these ice quakes can lead to large portions of glacial ice moving "as much as 10 meters (33 feet) in under a minute."

Interestingly, Dauviller in his original 1934 report speculated that, despite the likelihood of glacial ice movements, the sounds he and his group heard were similar to the so-called "desert song", an anomalous sound in nature that is reported in deserts and other areas with long, sloping sand dunes can form. "Is this vibrating sound really caused by the detachment of icebergs," Dauviller asked, "or is it similar to ‘desert song’, that strange musical note produced by sand? IN fact, there is a close analogy between the fields of powdery dry snow of the inland ice and the fields of sand of the Arabian Desert."

For more information on sand dunes sounds and the so-called 'Seneca Guns' phenomenon, we recommend David P. Hill' paper on the subject, from the SSN Journal, October 2011, which can be read here.

Teggie, the Terror of the Lake