Beware of the Deadly Aswang

For centuries the people of the Philippines have told of a violent, malevolent monster that has provoked terror and mayhem and which has been responsible for an untold number of savage, violent deaths. It goes by the name of the Aswang – and is also known as the Tik-Tik and the Sok-Sok, on account of the strange clicking noises it makes when it is about to launch an attack on its prey, which is very often us, the Human Race.

Although reports of the Aswang can be found all across the Philippines, the monster is most often reported on Mindanao – the second largest island in the Philippines – and in the Visayas Islands, and particularly so on the islands of Bohol and Negros.

While outsiders might take the view that the Aswang is merely a best or legend and folklore, many of the people of the Philippines have a very different opinion: to them, the monster is all too real. And it’s a gruesome, marauding thing that is part-vampire and part-zombie. According to local lore, most Aswangs are female. They are generally not, however, of the beautiful, seductive type that one might expect to see in a Gothic-style vampire movie.

The Aswangs just might be your very worst nightmare. They are scrawny, emaciated things with gray and mottled skin, and milk-white eyes that are as cold-looking as they are emotion-free. Sores and boils cover their bodies. They give off a stench of rotting meat. And they are typically garbed in ragged, torn clothing.

Despite their rotted appearance and odor, the Aswangs are highly athletic, having the ability to run at phenomenal speeds and to leap to heights of around fifteen feet or more, as they pursue their terrified soon-to-be victims and dinner combined. No wonder that the zombie-vampire legends have taken such a firm hold. 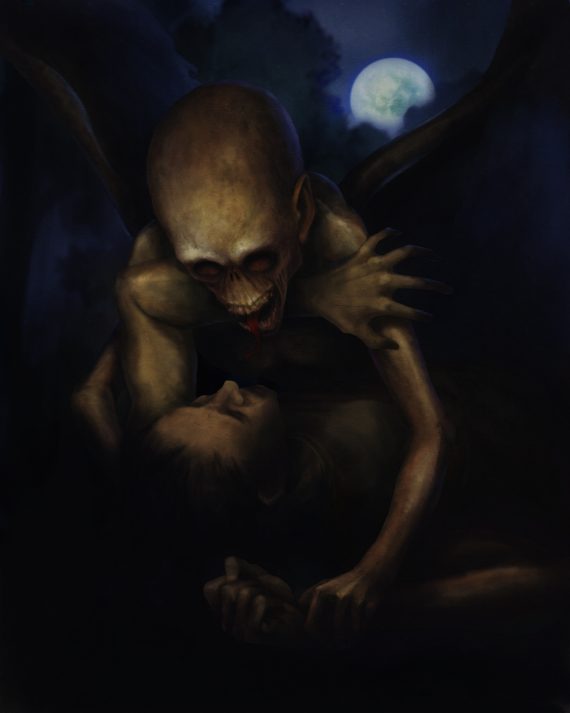 Worse still, the Aswangs have a particular taste for the flesh of newborn babies and young children. They will do their utmost to seek out the young and the vulnerable, silently and stealthily breaking into homes in the middle of the night, and slaughtering and taking away the corpses of those targeted.

Although the Aswangs will devour just about every part of the human body, they are most partial to the liver and the heart, which are seen as definitive delicacies to these infernal things. When an Aswang is unable to seek out a tasty human, they will resort to prowling around cemeteries and graveyards, clawing into the dirt and digging up the recently buried.

Also mirroring the lore surrounding zombies and vampires, if a person is attacked and bitten by an Aswang, but manages to escape its clutches, he or she too will soon become an Aswang. Infection takes no time at all to set in, and the process of mutation from human to monster is unstoppable. Like the zombie virus of so many movies and television shows (such as Dawn of the Dead and The Walking Dead), there is no cure for the deadly infection that the Aswang delivers and which quickly surges through the bloodstream.

As infection spreads, the poor victim develops a craving for blood, for human flesh. Violent mood swings develop. The person is affected by sudden bouts of rage. It’s only a matter of time before the infected lose all of their humanity and become fearsome, cannibalistic monsters.

It’s not just vampires and zombies that the Aswangs resemble: like the classic werewolf of folklore, history, and Hollywood, the Aswang can shape-shift itself into multiple, animal-based forms, including a huge black dog with glowing eyes, a bipedal wolf, and a huge and violent pig.

Of course, there's no need to really worry, as the Aswang is simply a creature of folklore and mythology. We hope...