Much has been written over the years of "mystery airships", which were reported throughout parts of the United States in the late 1890s. Newspapers of the day recounted not just the sightings, but often named prominent individuals who had seen the alleged craft, during high-profile cases that include a "wave" of reports over Sacramento and parts of Southern California in the winter of 1896-97.

Less is said of the fact that, in April of 1896, a rather unique patent had been filed which read as follows:

Smith, in apparent seriousness, wrote in the patent's description:

To all whom it may concern: Be it known that I, CHARLES ABBOTT SMITH, a citizen of the United States, residing at San Francisco, in the county of San Francisco and State of California, have invented certain new and useful Improvements in Aeronautics; and I do declare the following to be a full, clear, and exact description of the invention, such as will enable others skilled in the art to which it appertains to make and use the same, reference being had to the accompanying drawings, and to the figures of reference marked thereon, which form a part of this specification.

Smith, it is said, even had a scale model of his invention, which was on display in a storefront window in San Francisco, where it was visible to all who passed by. That, however, is probably the extent to which we can say his "airship" was ever actually realized. 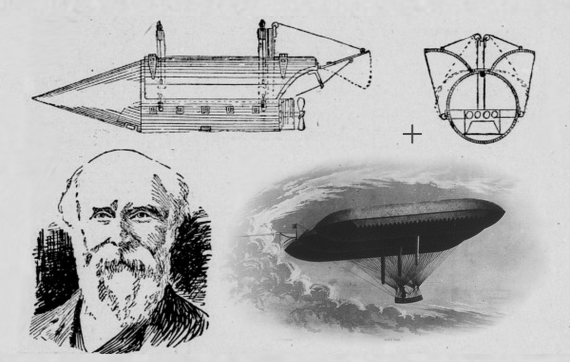 More shall be said of Smith and his patent a bit later... but first, I would like to direct your attention to a rather odd, and seemingly coincidental note that would turn up several decades later, and of all places, in John Keel's The Mothman Prophecies. Here, the author recounts an interesting -- if unlikely -- parallel to the mystery of Charles Smith's apparent airship aspirations: Keel gives mention of an 1897 news story detailing where a purported mystery aircraft had landed in Texas.

Of greater interest was the pilot, who had apparently not only stopped to fetch supplies for his aircraft, but also gave his name to a bystander on this occasion:

On April 22, 1897, an oblong machine with wings and lights “which appeared much brighter than electric lights” dropped out of the sky and landed on the farm near Rock-land, Texas, owned by John M. Barclay. Barclay grabbed his rifle and headed for the machine.

He was met by an ordinary-looking man who handed him a ten-dollar bill and asked him to buy some oil and tools for the aircraft.

“Who are you?” Barclay asked.

“Never mind about my name; call it Smith,” the man answered.

John Keel mused that such "common names" as Smith were often found in more popular UFO reports that would begin to appear decades later, likening the airship affair to the more recent claims of exotic aircraft and, occasionally, those claiming ownership of them. "In 1897, they often claimed to come from known villages and cities," Keel wrote, "and were even able to name prominent citizens in those places. But when reporters checked, they could find no record of the visitors and the named citizens disavowed any knowledge of them."

Whether or not records of a Charles Abbott Smith could easily have been found in Keel's day is debatable, at least (though not impossible, obviously). Today is a different story, with the digitization of everything from census records and death certificates, to a host of other information available through sites like Ancestry.com. In short, digging up these kinds of records today wouldn't present the kinds of hurdles it set before researchers like Keel just a few decades ago.

In that line of thought, it should be noted that Keel made similar estimations about another man, who had been a visitor to the home of a Mrs. Ralph Butler of Owatonna, Minnesota. Butler described having an odd meeting with a man who stopped by her home unannounced in May 1967. Keel described that this visit transpired in conjunction with a number of UFO reports in the area, and speculated that the man, identifying himself as “Major Richard French of the U.S. Air Force”, had been no such character:

"Richard French was an imposter. One of the many wandering around the United States in 1967. For years these characters had caused acute paranoia among the flying saucer enthusiasts, convincing them that the air force was investigating them, silencing witnesses and indulging in all kinds of unsavory activities—including murder. When I first began collecting such reports I was naturally suspicious of the people making such reports. It all seemed like a massive put-on. But gradually it became apparent that the same minute details were turning up in widely separated cases, and none of these details had been published anywhere... not even in the little newsletters of the UFO cultists."

Keel may have been right about the fact that there were, in likelihood, counterintelligence programs underway that sought to exploit UFO buffs and the "knowledge" they possessed. This might explain the sorts of "minute details" that he kept spotting in places where none should have been, and a few years later, realistic precedent for this idea would emerge in the form one of the most famous UFO hoaxes of the last century: the infamous MJ-12 affair that erupted in 1984, where bad information (some of it obviously faked) was supplied to members of the UFO community.

Keel had been wrong, however, about one thing: that this "Richard French" fellow was not who he said he was. In fact, years later the retired Col. Richard French would indeed turn up again, this time announcing that he had been part of Project Blue Book around the time Keel had written about his encounter with Mrs. Ralph Butler.

French can be seen in the video below, giving a statement about his operations with the USAF during The Citizen Hearing on Disclosure, held at The National Press Club in May of 2013:

As an aside of quasi-significance, it should be noted that French has also made a number of unusual claims himself, such as his alleged observation of a submerged UFO undergoing maintenance off the coast of Canada during his tenure with the USAF Office of Special Investigations (OSI).

Let's return to that unusual patent belonging to Charles A. Smith that appeared in 1896, and more importantly, the similar name used by the alleged pilot of an "airship" seen in Texas the following year. Here, we might at least speculate that Keel's line of thought pertaining to "common names" used by the kinds of "frauds" he felt were turning up in relation to these mystery aircraft reports over the years hadn't been entirely spot on. Richard French was, in fact, precisely who he said he was; but this alone does not support the legitimacy of a "Mr. Smith" dropping down in his airship in a Texas town in 1897, let alone his relationship with a patent filed one year earlier.

The notion that a working airship was in service in 1897 over America is not impossible, however, given the fact that similar working airship designs had been tested, and even reproduced and sold in small quantities as far back as the 1850s in France. The first of these was Henri Giffard’s 1852 airship that, while crude in design, became the first powered and steerable craft of its kind.

Of these early airship test-flights, a word should also be said about the frequent insinuations that the popularity of two Jules Verne novels published at the time, Robur The Conqueror and its sequel Master of the World, were the influence behind popular "airship" reports of the late 1890s. Verne had, in fact, been inspired himself by these early, lesser-known designs, such as that of airship pioneer Arthur Constantine Krebs, whose work is even mentioned briefly in Robur the Conqueror.

In the United States, airship test flights date back to 1863, with inventor Solomon Andrews' line of airships he dubbed the “Aereon.” An experimental design of this craft was demonstrated before representatives of the Smithsonian Institution in 1864, with some talk of possible interest for using the device during the ongoing War Between the States. However, as the conflict was drawing to a close, the idea was swiftly abandoned.

Following the war, Andrews, in his persistence, went on to form an outfit he called the Aerial Navigation Company, with the intent of building his airships for commercial transportation between New York and Philadelphia. However, financing problems that ensued following the Civil War further complicated matters, and left Andrews unable to find a viable market where the idea could be sold.

Andrews’ idea hadn’t died completely, though. Interestingly, more than a century later a new company, adopting the same name as that which Andrews gave to his airship, attempted to redesign Andrews’ airship. According to aviation historian John McPhee, the twentieth century Aereon Corporation’s attempts to rebuild and capitalize on Solomon Andrews’ original airship ideas directly influenced the creation of inventor Daniel Geery’s Hyperblimp, as seen below:

So there had, in fact, been airships that achieved a modicum of success with experimental flight, albeit somewhat haphazardly, decades prior to the "airship wave" that supposedly took place between 1896 and 1897. These early flights cannot prove that any real, working airship was drifting over the U.S. by the turn of the century; however, the technology certainly existed by then, and there were certainly those who had already sought to capitalize on the idea of commercial flight.

In Smith's case, there would have to have been a certain amount of funding to, in the very literal sense, get his project "off the ground." While this has remained a major argument against the Smith patent as a possible source of the technology behind airship reports of the 1890s, a news article appearing in the San Francisco Call, Volume 79, Number 91, on February 29th, 1896, described that Smith’s design was to be "filed with the articles of incorporation of the Atlantic and Pacific Navigation Company," as can be read in the original article here. A relevant excerpt describing the project has been included below: 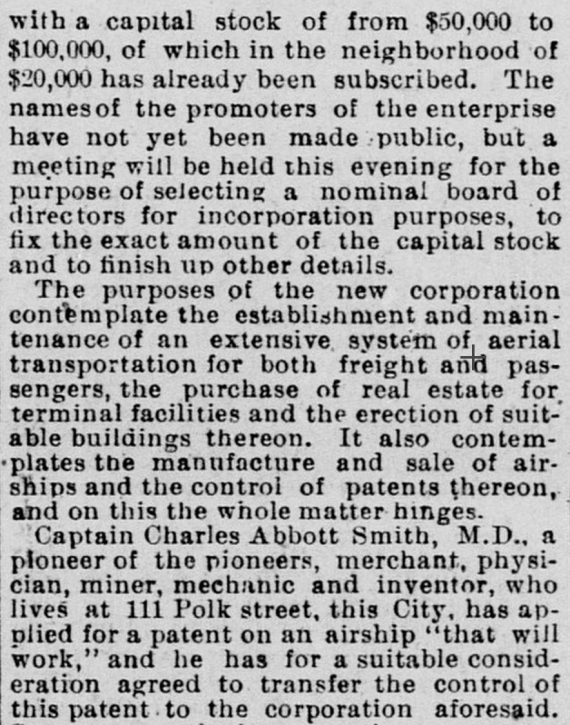 So maybe somebody did take the commercial airship idea seriously... and within months, newspapers were reporting that a "mystery airship" was seen over the same town where the patent owner, and the company who purportedly were in support of funding his project, had lived.

Whether or not a Charles A. Smith of San Francisco, California, had anything to do with the entire airship affair will remain in the realm of speculation, for now. There is, admittedly, more work that would have to be done to determine the legitimacy of the idea, if there were any to be found at all. For all we know, the idea really didn't ever get the funding it needed, and it was forgotten, mostly.

One thing we do know, at very least, is that history shows us, even if Smith did build his airship, that he hadn't been the first to attempt doing it for commercial reasons in America... not by a long shot. This is revealed in the story of his predecessors, the likes of Solomon Andrews, who had done far more than just toy with the idea... and who did so decades earlier than Smith (still) might have taken a crack at building the first fully-functional commercial airship industry in American history.

People in Sleepy Village of the Damned Wake Up Craving Sex