With tornadoes wreaking havoc across many parts of the United States, some people are starting to look for areas with climates and geography that are less prone to the devastating twisters. You could move away from the plains to the coasts, but those areas have to deal with waterspouts and sharknados. Think a cold, snowy mountain area might be safer? Think again. A skier in Austria recently encountered an extremely rare snownado. A what?

Heinz Petelin was skiing in the Alps near Lessach, Austria, when he came upon a phenomenon weather experts say only a few humans have ever seen and even less have recorded – a snownado or snow devil. Fortunately, Heinz was carrying a camera and managed to record a clear and dramatic video of the frigid whirlwind.

Little is known about snownados. There are only six known pictures of them with four occurring in Ontario, Canada. They are closer in formation to waterspouts since they form over frozen lakes or snow-covered areas. Warm air causes the snow or ice to form fog or steam. If there is a column of cooler, low-pressure air above the fog, it will sometimes rotate as it rises, taking loose snow with it as it forms a whirlwind that can be anywhere in size from a desert dust devil to a large waterspout.

The combination of conditions required to create snownados makes them rarer and less intense than tornadoes. The one witnessed and recorded by Heinz Petelin was not going to destroy any chalets. If rotating counterclockwise (the common - although not always - direction in the northern hemisphere), snowados are traditionally seen as a warning that more snow is on the way and that was case in Lessach.

Now excuse me while I go back to work on my script for a movie about an evil oil company in the Arctic whose wells get destroyed by a Polar Bearnado. 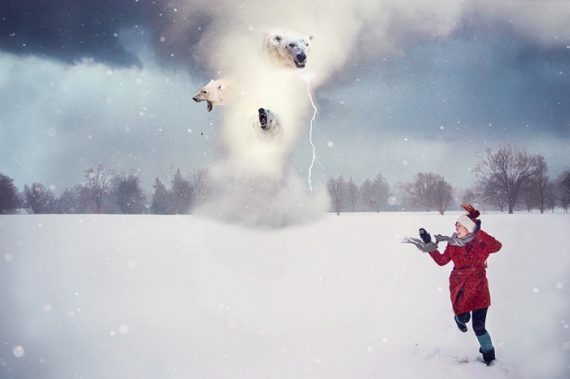 These Eerie Noises in British Columbia May Have Just Been Identified