You’ve seen the pictures of the destruction caused by the catastrophic earthquake that hit Nepal on April 25, 2015. You’ve read articles about how the magnitude 7.8 quake shook the area so hard that the height of Mt. Everest dropped an inch as the Indian tectonic plate pushed against the Eurasian plate under Kathmandu, causing tremors that could be felt 700 miles away. Now NASA has revealed that this powerful force was felt in the atmosphere above Nepal as well as it sent waves of energy through the air and disturbed the Earth’s ionosphere to the point where its electrons were ringing.

The waves created by the Nepal quake were picked up by Global Positioning System satellites. A receiving station in Lhasa, Tibet, collects data for both GPS and the Russian global navigation satellite system GLONASS from the ionosphere between 60 km (37 miles) and 1000 km (621 miles) above the Earth’s surface.

It took 21 minutes for the disturbance in the atmosphere to reach the Lhasa station 400 miles from the epicenter. Using software developed by the Jet Propulsion Laboratory, engineers filtered the vertical total electron content (VTEC) to isolate the waves as they disturbed the electrons in the ionosphere. 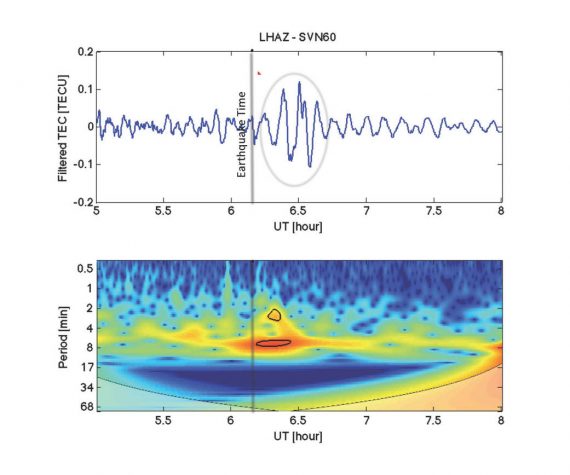 The measurements show the length of the waves (between 2 and 8 minutes) and the changes in intensity (highest intensity shown in red) which equate to the period the electrons were ringing.

While the sound of electrons ringing isn’t entertaining, it’s definitely informative. NASA collects data on the ionospheric disturbances after natural disasters like earthquakes, tsunamis and volcanoes as part of an effort to develop models that may someday predict their  occurrences and develop better warning systems.

It's high time the residents of this planet start predicting earthquakes rather than causing them.