New Photo of Ceres Shows Lines but Avoids the Lights

Has interest in the mysterious lights on Ceres cratered at NASA? That may be the message it’s trying to send with the release of the latest picture taken of the dwarf planet by the Dawn spacecraft which shows spectacular views of craters and some mysterious lines but none of the lights we all really want to know about. Is NASA moving on to other locations because it found something about the lights that can’t be revealed?

The new images were taken on May 23rd when Dawn was 3,200 miles (5,100 km) from Ceres. At a resolution of 1,600 feet (480 meters) per pixel, the image that was released has excellent clarity. The area is 13-51 degrees north latitude and 182-228 degrees east longitude and shows secondary craters made by the redistribution of debris from other craters.

But no lights. The released image shows the mysterious lights to the right of the enlarged area but no highlights of them. NASA says that this set of photos called OpNav9 was “the ninth and final set of Dawn images of Ceres taken primarily for navigation purposes.” That sounds like a convenient but vague excuse for pointing the camera away from the lights that NASA has been calling “ice.” NASA's poll of what the rest of us think the lights are had "Other" winning by an avalanche over ice. 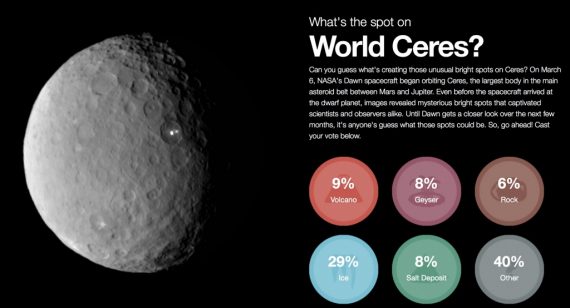 The release also makes no mention of a mysterious UFO seen previously near the lights nor of the horizontal lines in the new photo that could be ridges, craters or something else – perhaps tracks or landing strips?

Dawn is now moving to a lower orbit (2,700 miles or 4,400 km) for the next round of mapping starting in early June. Each orbit will last three days, giving Dawn plenty of time to photograph the lights.

Unless there’s something about them NASA doesn’t want us to know about. Any thoughts on that or the mysterious horizontal lines in the new image?

Even Without Drugs, Many Hallucinate – Especially Nuns