Strange Creatures Seldom Seen is an excellent new book from John Warms, and which is published by Chad Arment's Coachwhip Publications. A copy of the book was given to me by Chad at last month's Ohio-based Creature Weekend. And, I have no hesitation in saying that if Cryptozoology is your thing, you'll want to get hold of a copy of this book.

The book focuses chiefly, albeit not wholly exclusively, on sightings of unknown animals in the Canadian province of Manitoba - and there are plenty of those unknown animals, too. The good thing about Strange Creatures Seldom Seen is that it's based on the author's personal, in the field, investigations. In other words, this is not some sterile, bland, all-from-the-Internet-type book - I'm very pleased to say. Plus, it's filled with never before seen photos and artwork, all of which, combined, make this a great read.

So, with that all said, what can you expect from John Warms? Let's take a look. We'll start with Manipogo, the resident monster - or, more likely, monsters - of Lake Manitoba. This Canadian Nessie has a long history, and Warms provides us with detailed background on the beast, as well as a number of notable, and previously unseen reports from firsthand witnesses. It's also an excellently illustrated chapter, with both color and black and white imagery.

Giant, winged beasts of an unidentified nature have been reported from all across the world, and for centuries. Amongst the more famous ones are, of course, the Mothman of Point Pleasant, West Virginia, the UK's Owlman, and Batsquatch. And Manitoba is no stranger to such winged-things either.

Interestingly, the reports from Manitoba closely parallel the kinds of things seen elsewhere: (a) large birds that resemble the legendary Thunderbirds of Native American lore and culture, and (b) huge, menacing, bat-like creatures. A perfect example of the latter: a creepy case from 2009, involving a couple from the Opaskwayak Cree Nation, and who described seeing a very weird animal like "a de-feathered goose," with bat-style wings, and which hovered in an upright position "like a little man."

For fans of such things as the aforementioned Mothman - and of other flying humanoids - this chapter alone is essential reading, chiefly because most of the cases have never been highlighted publicly before. Moving on, stories of giant snakes - as in massive snakes - abound in the pages of Warms' book, such as the 60-footer seen in Lake Winnipeg, and the huge "horned snakes" of Swan Lake.

Of course, Strange Creatures Seldom Seen wouldn't be complete without a section on Bigfoot - and Warms provides us with precisely that. There is the fascinating case of a Bigfoot reportedly shot and killed in 1941 (in the Basket area west of Gypsumville), the account of a baby-carrying female Bigfoot, and a "light orange"-colored Bigfoot seen in the mid-1990s. This chapter, alone, runs to almost 50 pages, demonstrating the rich and extensive body of reports in this specific area of the world. 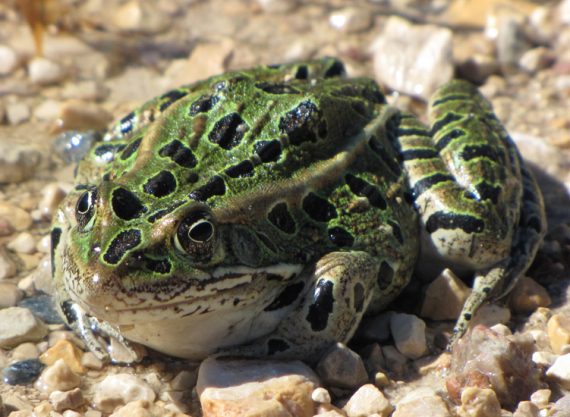 Of particular interest to me, are the chapters on out of place (as in very out of place!) alligators and crocodiles, and sightings of what can only be described as giant frogs. Many might scoff at the idea of a "bear-sized" frog on the loose, and another being "three feet every which way," but there is no doubting there's a long history of people seeing what are at least superficially em>frog-like creatures in Manitoba.

Encounters with Goliath-sized beavers abound in Cryptozoology - and they abound in the history of Manitoba, too. Warms' 39-page chapter on this curious phenomenon demonstrates the extent to which the author has pursued this mystery. That includes expeditions into the wilderness, securing witness testimony, and chronicling the quest in photographs.

Coming across a beaver the size of a bear must surely be an intimidating experience - but that's the account we get from a witness at Apegano Lake. Warms also digs deep into the matter of strange, large holes and burrows that just might have been the lairs of these huge, formidable beasts. Of a far more Fortean nature are reports of so-called "merbeings," weird kangaroo-like animals, the "little people," and the menacing Windigo.

Should you buy John Warms' Strange Creatures Seldom Seen? You know you should! This is the personal odyssey of one man who has tirelessly pursued the mysterious creatures of Manitoba with zeal and enthusiasm, and with a level-head on his shoulders. It's an excellent addition to the world of books of the cryptozoological kind.

Lost Documents and the Mysterious Wildlife of Mauritius