The mysterious lights on the dwarf planet Ceres are apparently of interest to more than just the Dawn spacecraft currently in orbit around it. New photographs of the lights show what appears to be a UFO circling the area and performing some impressive maneuvers. Is NASA going to make a statement on this one or resort to another viewer poll? 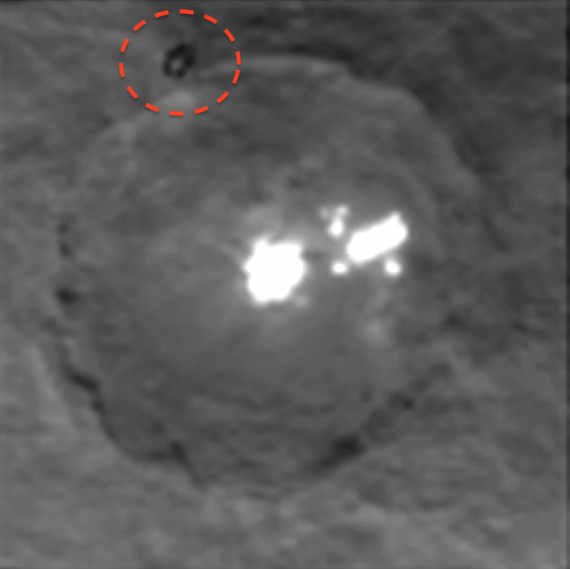 The UFO can be seen in the latest set of images released by NASA earlier this month. Those are the ones showing that what was first believed to be two lights on the surface of Ceres turned out to be lots and lots of lights. While most reports refer to them as “lights,” NASA wants us to think of them as reflections off of ice or some other naturally reflective matter. And to show how surprised and puzzled its scientists are, NASA has set up a web site to collect votes on what the rest of us think the lights/reflections/??? might be (“Other” is still in the lead).

The two photos show the oblong-shaped UFO moving from one side of the lights to the other and apparently making a half turn in the process. The change in perspective could account for the differences in the shape of the UFO from the first photo to the second. It could also mean that the UFO is circling the lights and keeping its own window/observation portal/camera trained on the lights ... or on Dawn. 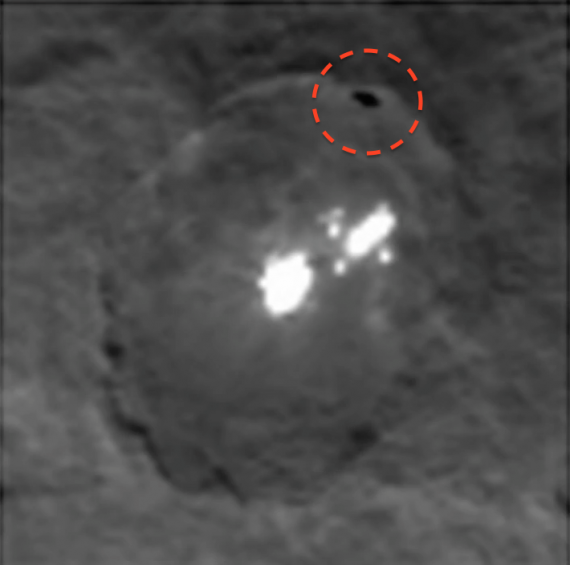 NASA hasn’t said anything about these spots so we’re free to speculate. If it’s not a UFO, perhaps it’s some space debris or meteor remnants that just happened to be floating by. It could be a shadow – some say of the Dawn spacecraft itself – but it seems strange that no other shadows or UFOs shaped like shadows have been spotted. A camera glitch? Maybe a really tiny alien spacecraft landed on the lens and is observing Dawn.