A Beautiful Death: The LSD-Mediated Passing of Aldous Huxley

We're in the middle of a cultural Renaissance, my dear Coppertops. No, I don't mean to say there are men in tights painting pictures of women with cryptical smiles --though you never know, right?-- or people being burned at the stake for proposing heretical ideas --unless you count Comedy Central Roasts.

No, the cultural revival I speak of has to do with the return of psychedelic substances in the mainstream scientific discussion. Thanks in large part through pioneers like Dr. Rick Strassman and Rick Doblin, labs across the United States and other parts of the world are, once again, running clinical trials to evaluate the many potential benefits these substances offer to both our physical and mental health.

By far one of the most interesting of these benefits, is in helping people with terminal illnesses ease the fear and depression provoked by their impending death. People like Pam Sakuda, who was diagnosed with stage 4, metastatic cancer, and before passing away in 2006 decided to take part in the study conducted by psychiatrist Charles Grob at the Harbor-U.C.L.A. Medical Center. Pam, along with 12 other subjects --except the ones who were part of the control group, of course-- was administered with psilocybin, the psychoactive compound present in 'magic mushrooms'; the results of the study, published in 2008, showed these compounds were a safe way to mitigate the anxiety levels of terminal patients.

But what about administering psychedelic substances at the exact moment of death? This is obviously something far more controversial, and no doubt researchers would have second thoughts of putting their DEA and FDA approvals on the line by attempting something that bold --securing the rights and access to small amounts of government-sanctioned stocks of psychedelics already cost them YEARS of bureaucratic red tape.

And yet, there seems to be enough evidence to suggest psychedelics could be a great way to ease the passing out of this mortal level of existence. In fact, these experiments have already been tried back in the time before Nixon launched his puritanical crusade against drugs, among iconoclastic intellectuals who have already attested to the mind-expanding qualities of these chemicals.

One of those individuals was Aldous Huxley, the celebrated English writer, philosopher, and author of the Sci-Fi classic Brave New World. Huxley started dabbling with mescaline in the 1950's, and by the dawn of the countercultural movement he was a complete advocate of psychedelics, especially with their connection with mystical and spiritual states. Those ideas inspired him to write the book The Doors of Perception, the title of that book later inspiring a grubby-looking fellow by the name of Jim Morrison to have his own Eureka moment…

Huxley never had a chance to watch Jim and his band perform in Santa Monica Boulevard though, because he died of laryngeal cancer in November 22nd, 1963 --that's right, the same day in which JFK was killed in Dallas by Lee Harvey Oswald and his magic bullet. By the end of his life, Huxley ended up bed-ridden and under the loving care of his second wife, Laura, and a friend of hers called Jinny; his first wife, Maria, had also died of cancer in 1955 and during her final hours Huxley put her into a hypnotic trance to guide her to a "mystical state of consciousness" and help her reconnect with previous ecstatic experiences in her life. 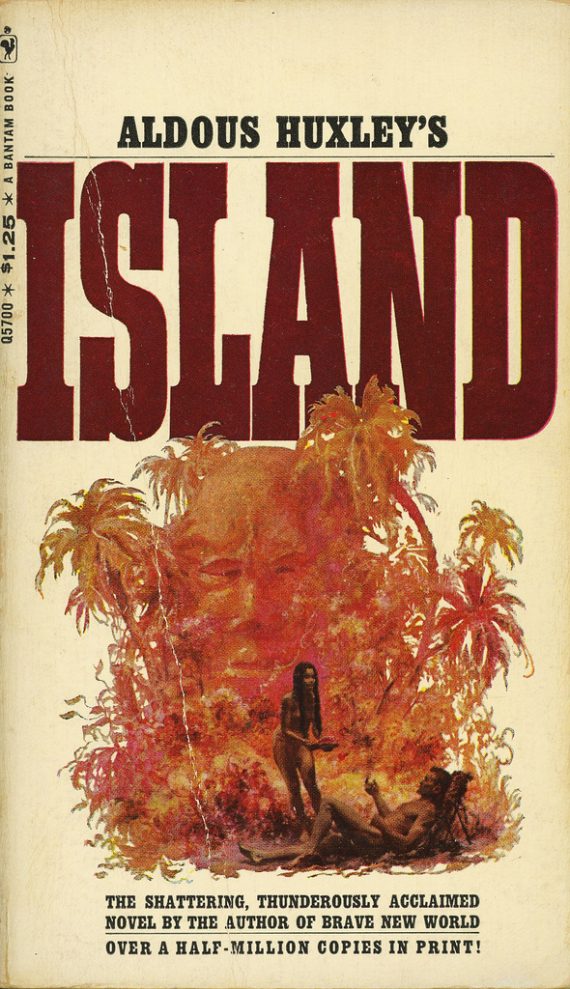 Huxley's thanatological assistance to Maria would later serve as inspiration for his last novel, Island (1962), in which he once again envisioned a utopical society living in the fictitious island of Pala, in the Indonesian archipelago; unlike the cloned-regulated futuristic civilization in Brave New World, in which 'soma' was a government-sanctioned drug intended to keep the population content and productive, the Palanese live in complete harmony with Nature and one another, and resort to the use of a drug called 'moksha' to help them reveal the true nature of their life, as well as rid them from the fear of death. Island shows a huge influence of Hindu philosophy and Eastern spirituality, which would eventually manifest on a larger scale in the contemporary New Age movement.

Perhaps Huxley was thinking of his 'moksha medicine' when, unable to speak any longer due to the cancer consuming his throat, he asked his wife Laura via writing on a tablet to be injected with 100 micrograms of LSD intramuscularly. She diligently fulfilled what they both knew was his last request, after the doctor guarding in the other room reluctantly acquiesced --the TV was just giving the news of President Kennedy's being shot-- and according to a letter she wrote to Huxley's older brother Julian, Aldous's face slowly showed a clear sense of relief not long after receiving the dosage.

While the evident signs of physical death started to creep in on his body, Laura was holding his hand, gently coaxing him to 'let go' and rise toward 'the light.' Huxley remained conscious during the whole time, squeezing his beloved's hand to let her know she could still hear her. Until the squeeze finally eased up, and the intellectual giant exhaled his last breath on this Earth.

I had been warned in the morning that there might be some up-setting convulsions towards the end, or some sort of contraction of the lungs, and noises. People had been trying to prepare me for some horrible physical reaction that would probably occur. None of this happened, actually the ceasing of the breathing was not a drama at all, because it was done so slowly, so gently, like a piece of music just finishing in a sempre piu piano dolcemente. I had the feeling actually that the last hour of breathing was only the conditioned reflex of the body that had been used to doing this for 69 years, millions and millions of times. There was not the feeling that with the last breath, the spirit left. It had just been gently leaving for the last four hours. In the room the last four hours were two doctors, Jinny, the nurse, Rosalind Roger Gopal – you know she is the great friend of Krishnamurti, and the directress of the school in Ojai for which Aldous did so much. They didn’t seem to hear what I was saying. I thought I was speaking loud enough, but they said they didn’t hear it. Rosalind and Jinny once in a while came near the bed and held Aldous’ hand. These five people all said that this was the most serene, the most beautiful death. Both doctors and nurse said they had never seen a person in similar physical condition going off so completely without pain and without struggle.

Years later, there were others who continued studying the applications of Psychedelic therapy on the dying. In the 2nd chapter of Stan Grof and Joan Halifax's book  The Human Encounter with Death, the scientific husband-and-wife (later divorced) explain how Eric Kast of the Chicago Medical School and his partner V. J. Collins wrote a scientific paper about the analgesic properties of LSD, in comparison with traditional pain killers [Kast E, Collins V. (1964). Study of lysergic acid diethylamide as an analgesic agent]:

The outcome of the statistical analysis of this comparison indicated that the analgesic effect of LSD proved to be superior to both Dilaudid and Demerol. In addition to pain relief, Kast and Collins noticed that some of these individuals showed a striking disregard for the gravity of their personal situations. They frequently talked about their impending death with an emotional attitude that would be considered atypical in our culture; yet it was quite obvious that this new perspective was beneficial in view of the situation they were facing.

Kast continued studying the properties of LSD, now focusing less on its pain-reducing properties and more on the emotional benefits it could elicit on dying patients. Grof and Hallifax also conducted psychedelic studies of their own, until the DEA put all the acid research on the freezer.

So, what have we learned from all of this? First, that in the year of the Lord Two Thousand and Fifteen, the fact that we still have qualms about supplying dying people with drugs is a telling sign of how LITTLE we've progressed in the last two millennia.

Secondly, that at the very least, chemical compounds like psilocybin and its synthetic counterpart lysergic acid can at the very least provide a modicum of pain relief during the final stages of terminal illnesses --unfortunately, that's also looked down upon by the modern medical practice in many countries, so… back to square one.

Last but not least, if you're open to the idea that human life cannot be simply reduced to its material components --and if you're reading is, you probably are-- then undoubtedly the most important gift these compounds can bestow upon the dying, is the comforting realization that physical mortality is nothing but quick transition into a different level of existence; hence Death it's not something we should be mortally afraid of, no pun intended.

Certainly though, the same parameters of 'Set and Setting' prevailing in any fruitful psychedelic experience should also be observed in the Psychedelic therapy with terminal patients. By the time of his death, Aldous Huxley was already a seasoned 'psychonaut', had put all his earthly affairs in order and was surrounded by people who loved him; if some of those requirements had not been followed, perhaps the outcome would have been different. 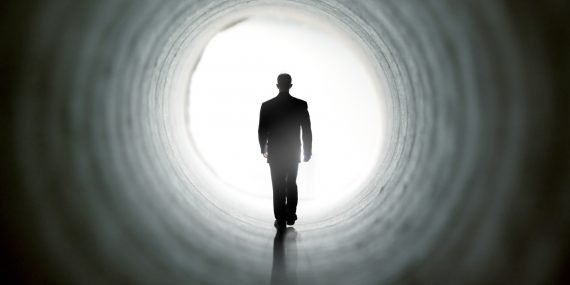 Nevertheless, there's a strong case for the benefit of psychedelic compounds to mediate the passing of the dying. And perhaps Mother Nature, as always, is one step ahead of us! In his seminal book DMT: The Spirit Molecule, Dr. Rick Strassman suggested how at the moment of physical death, the decomposing pineal tissue might 'dump' its content of the natural-occurring psychotropic into the brain, thus naturally mediating the death experience, and possibly explaining the 'hallucinations' reported by NDErs. Strassman's hypothesis has been highly challenged by several NDE researchers, and the results he obtained in his own clinical study forced him to review his hypothesis --of all the test subjects who were administered DMT, only 2 experienced themes of death and dying in their sessions; also, it has to be remembered that ALL test subjects were clearly aware of what was going on with them, and knew they were not dying.

The jury is still out on how much of a role, if any, DMT plays during the final moments of a dying person. Two things seems to be certain, though: One, that dying seems to be a very personalized experience --perhaps the most personal one you will ever have-- and that each person goes through it in as different a way as they got to live their entire life.

The second one, you already know: Death is a trip we are ALL going to make, sooner or later. So just like in a good psychedelic experience, make sure to work on your own terminal 'set and settings.' With any luck --and perhaps help from 'the other side'-- you will leave this existence without much physical discomfort and surrounded by loving family members and friends. 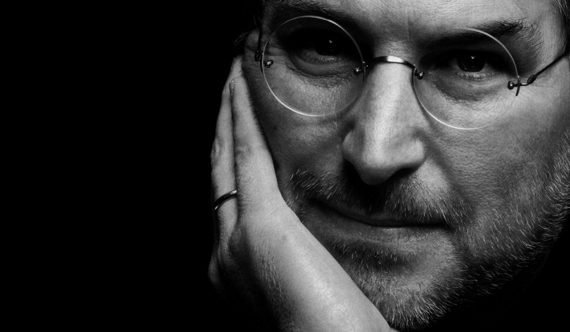 Then you'll be ready to understand what prompted the late Steve Jobs --another LSD advocate-- to say "Oh wow. Oh wow. Oh wow!" with his last breath.

Infrasound, Bigfoot, and the Paranormal