Alligators of the Sewers – Real Ones!

One of the most persistent legends concerning the New York City sewer-system is that it is home to a largely hidden population of marauding alligators. Just about everyone knows, and enjoys, the engaging stories. But, most people are content to write off such tales as simply friend of a friend yarns and modern day folklore. Maybe they shouldn’t.

Despite claims that the whole thing is one big urban legend and nothing more, that's not exactly the case. It would seem, at least. Sifting fact from fiction, rumor from hearsay, and claims from evidence, is no easy task. But, as is so often the case when it comes to folklore and urban legends, there is at least a nugget of truth to the stories of New York's alligators, if nothing else.

Back in February 1935, none other than the New York Times reported on the astonishing discovery of an alligator in the sewers of the city. The article was titled "Alligator Found in Uptown Sewer: Youths Shoveling Snow See the Animal Churning in Icy Water." According to the story, one Salvatore Condoluci was the ringleader. He and his teenage gang snared and killed the beast, which was found below an open manhole cover located near the Harlem River, on 123rd Street.

Or, rather, we're told that is how it went down. Certainly, no-one from the Times ever saw the body of the animal, and so the idea that it was all a prank on the part of Condoluci and his buddies can't be entirely ruled out - something which has the potential to confuse the true picture even more.

Moving on, it's time to turn our attentions to a man named Teddy May. For more than three decades, May held the position of Commissioner of Sewers in New York. May heard all the stories of numerous, fearsome alligators roaming the lower levels of New York, but dismissed them. Or, more correctly, he dismissed them at first.

One rogue case - the Condoluci affair - was plausible. But dozens of beasts, terrorizing New York like the animal equivalent of a 1950s-era street-gang from the Bronx? It was way too good to be true, right? No, it was not; not completely. As time went on, more and more reports reached May and his staff, to the point where a decision was taken to try and get to the bottom of the controversy and answer two significant questions: Was New York infested by alligators? Maybe even by man-eaters? 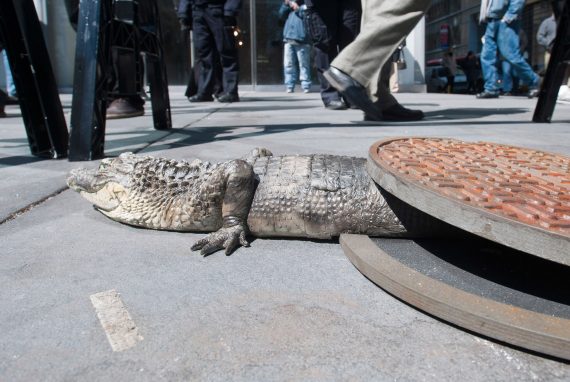 Well, "infested" might have been too strong a word to use. But, being proactive and feeling a need to offer an answer to the stories that were floating around the Big Apple, May decided to take a trip into the city's watery underworld for himself. Amazingly, he claimed to have seen several such creatures prowling around the sewers - no doubt in search of a tasty rat or several.

It should be stressed that we're definitely not talking about giant, vicious monsters of the type that one might see in one of those terrible movies on the SyFy Channel. No, the alligators that Teddy May said he saw were just a few feet in length. Of course, that didn't take away the fact that, over time, they might have expanded to a point where they became capable of taking on a person. And winning, too. Reportedly, all the animals were either gunned or poisoned to death. Just maybe, however, they didn't all die.

I wrote about this affair in my book, The World's Weirdest Places. As a result, every now and again I get a tale (or, as is usually the case, a bare snippet of a tale) suggesting that the alligators are still around, and still consider New York's underworld to be their hunting ground. Remember that, if you ever feel the need to check out New York's subterranean domain for yourself. You may go from eating lunch to becoming lunch.