Carl Sagan, one of the patron saints of the Skeptical/Atheist movement (pun intended) felt a personal responsibility to attack what he called 'pseudosciences'. Being an astronomer, the field he had probably more contempt for was Astrology, and in his seminal TV series Cosmos he's shown complaining --and rightly so, I might add-- how virtually every newspaper in America had a horoscope section, but almost none of them had a dedicated space for Astronomy.

The turtle-necked science educator might have been spinning in his grave early this month, when Time magazine run an article about Nicholas Tatonetti, a scientist at Columbia University Medical Center --running a lab there under his own name--  who probably feels like a bizarro version of Giordano Bruno.

The reason? A report he published in the Journal of the American Medical Informatics Association, which in this day and age seems down-right heretic: That the month you were born in, somehow affects or determines the types of disease you'll be more likely to be at risk for during your lifetime.

He and his team based their conclusions on an extensive database of patients seen at Columbia Medical Center during a 14-year period, trying to weed out the kind of bias affecting similar studies.

Tatonetti found that among 1,688 conditions for which patients were seen, 55 showed a strong relationship with birth month that could not be explained by chance alone. These included 20 conditions that were already described from previous, smaller studies, and 16 completely new associations. These included a surprisingly large number of heart-related diseases.

“Not only was it surprising that nobody had studied the relationship between heart disease and birth month yet, but we found not just one association but several with the same trend of increased lifetime risk of heart disease for those born in late winter and early spring,” says Tatonetti. “That’s suggestive of a mechanistic relationship, although we don’t yet know what that is.”

What mechanism that is exactly, Tatonetti is not pretending to know, and he certainly is not claiming that your chronic constipation is caused by Uranus --you know I had to go there!

Nevertheless, he claims his study is pinpointing to an intriguing environmental correlation deserving of further study.

“Astrology puts a lot of stock on what month you were born in, and that really hurts this type of research, since there isn’t much scientific evidence to support that,” says Tatonetti. “But seasonality is a proxy for variable environmental factors present at the time of your birth, and we are learning more about the very large role that environment, and gene-environment interactions, plays in our development. This could be one way to start mapping out those gene-environment effects.”

Skeptics will no doubt start spouting their favorite "post hoc ergo propter hoc" mantra after reading this quote --be careful not to stand too close to their mouth-- and in truth, what Tatonetti seems to have found leaves unanswered the possible causation behind this monthly correlation.

I too have no love whatsoever for the market-tabloid version of Astrology and ASK-YOUR-STARS  1-800 'hotlines'. Charlatanry is only ONE of the things I think about when I look at the photos of Walter Mercado, one of the most famous con-strologers in Latin American television. 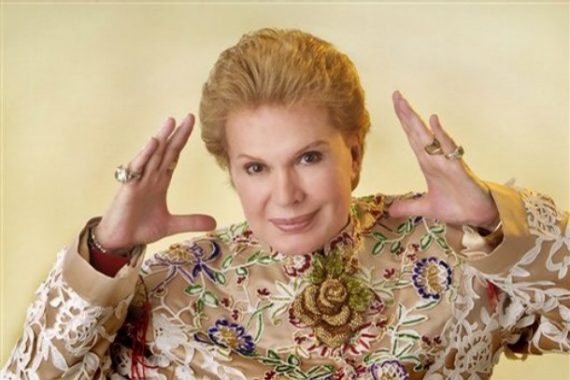 (It's not the drag, mind you. Although the botox is really pushing it.)

But back in 2011, when I was having a lively discussion about the merits (or lack thereof) of Astrology, a few of our members at the Daily Grail community were quick to point out --both on the public comments and in a private conversation-- how my personal opinion of it was crudely stereotyped. Any field is plagued with its share of cons and charlatans --even Medicine has to deal with quacks-- but to attack an entire discipline based only on its less defensible members is a straw-man argument. To me it would be like equating the work of UFOlogists Dr. J. Allen Hynek and Jacques Vallee with the likes of Karl Korff.

That shouldn't relief either field of raising their own standards, though...

I'm still on the fence when it comes to Astrology --as with many other Fortean topics I'm interested about-- and I doubt a group of stars forming a certain pattern during a particular point and time in the sky, is 'beaming down' some arcane energy which affects whether I'll have luck in love, a propensity for diabetes, or a tendency to stay up all night playing Assassin's Creed.

I am, however, not entirely opposed to the idea that certain potentialities or possibilities could be somehow dictated by complex net of circumstantial aspects we have yet to comprehend, and that said circumstances might some how be charted and calendarized based on celestial or other seasonal observations.

I think we also ought to be mindful of how novel ideas in Science are introduced --as well as old ones re-considered. Even theories based on completely erroneous assumptions could be capable of conjuring acceptable predictions --for example, how the ancient notion of the Ptolemaic 'epicycles' could still be used to calculate eclypses and the position of planets with respectable accuracy.

We should never dismiss a 'crackpot' theory out of hand, just because it hasn't been able to iron out all the minutiae pertaining to the possible mechanism behind an observable phenomenon. And to remind us of that, here's an old video of physicist Richard Feynman --like Sagan, another major figure  in the Skeptic pantheon-- describing the difference between 'knowing' and 'understanding':

In our path toward knowledge it's paramount to remain objective, but also open-minded. Not doing so would be the real disaster --from the Italian word disastro, or 'ill starred' event.