Beware of the Mongolian Death Worm!

Known and feared by those that call the Gobi Desert their home, the Mongolian Death Worm is a beast that has become legendary in monster-hunting circles. That, at least, is its westernized title. For the people of Mongolia, it’s Allergorhai horhai, which translates into English as “intestine worm.”

Its monstrous moniker is derived directly from eyewitness to the creature, who say that in terms of its physical appearance it very much resembles the stomach of a cow and is nothing less than blood red in color. The Mongolian Death Worm can grow to lengths of up to five feet, is as thick as a man’s arm, and is best avoided at all costs. Indeed, it didn’t get its memorable name without a good reason. In addition, it predominantly lives underground. 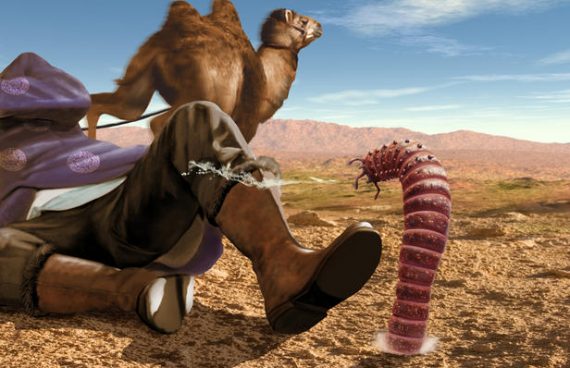 The creature has two ways in which it brings down its prey – which, on occasion, has reportedly included people. It has the ability to spit, over distances of up to around twelve feet, an acid-like venom that can burn through clothing, skin, muscle, and right down to the bone; something which causes the victim to turn a sickly, jaundice-like yellow. The coiling terror can also emit a powerful electric shock that – in a fashion not unlike an electric eel – stuns or kills its prey, thus allowing it to quickly move in and partake of a good, hearty meal.

It was not until the mid-1920s that word of this hideous thing reached the west. Prior to that time it was a case of what happens in the Gobi Desert stays in the Gobi Desert. The news that Mongolia was possibly home to a terrifying monster came from one Professor Roy Chapman Andrews, who was the author of the 1926 book On the Trail of Ancient Man. It was while seeking evidence of the presence of early humans in Mongolia that Andrews heard some very weird tales about a certain deadly beast rumored to live below the sands.

In his book, Andrews said: “This is probably an entirely mythical animal, but it may have some little basis in fact, for every northern Mongol firmly believes in it and gives essentially the same description. It is said to be about two feet long, the body shaped like a sausage, and to have no head or legs; it is so poisonous that even to touch it means instant death. It is reported to live in the most arid, sandy regions of the western Gobi. What reptile could have furnished the basis for the description is a mystery!”

A great deal more was learned about the Mongolian Death Worm in the summer of 1990. That was when a cryptozoologist named Ivan Mackerle traveled to one particular part of Mongolia: an area of desert southwest of Dalanzadgad. One of the U.K.’s most respected cryptozoologists, Richard Freeman, says of a particularly intriguing account that Mackerle uncovered during his expedition:

“The expedition’s interpreter, Sugi, told them of a dramatic incident from his childhood. A party of geologists had been visiting Sugi’s home region. One of them was poking into the sand with an iron rod when he suddenly collapsed as it poleaxed. His colleagues rushed to his aid only to find him dead. As they examined the ground into which he had shoved, they saw the sand begin to churn violently. Out of the dune came a huge bloated death-worm.” 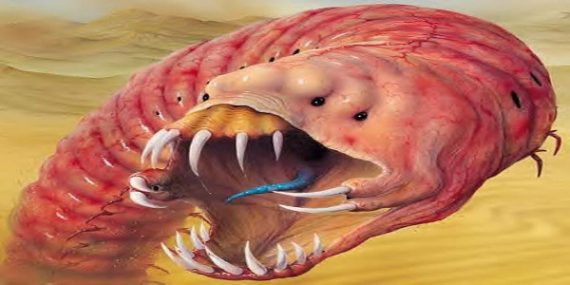 Reports of the Mongolian Death Worm continue to surface periodically, suggesting that one should be very careful when crossing the Gobi Desert, lest one has some warped desire to end up as the meal of a monster. You have been warned!

The Other Mysteries of Roswell