Book Review: “Aleister Crowley: Magick, Rock and Roll, and the Wickedest Man in the World” by Gary Lachman

Despite having died more than half a century ago, Aleister Crowley, the self-styled “Great Beast,” continues to exert a powerful influence on culture and society, with many people today expressing a keen interest in his life, work, and philosophy. In fact, it would not be an exaggeration to say that Crowley is more relevant now than ever before. Many of the things he admired and stood for—in particular, anarchy, selfishness, hedonism, drugs, sex, and doing “what thou wilt”—permeate the collective consciousness of the 21st century.

Love him or hate him, Crowley was a remarkable individual. To say he lived a full life would be putting it mildly. A chess master, poet, author, mountaineer, ceremonial magician, drug addict, painter, sexual deviant, guru, and scoundrel, he climbed some of the highest mountains in the world, penned a number of respected books on Western occultism, performed many acts of magick, bedded countless “scarlet women,” and ruined numerous lives through his callous and devious ways. It was Crowley’s darker and more controversial deeds that earned him the title by the press “the wickedest man in the world.”

Considering his larger than life personality, it’s no wonder that Crowley is such a popular biographical subject. I first read about him in Colin Wilson’s classic book The Occult (1971). Wilson, who was first and foremost an existential philosopher, had much to say about Crowley with respect to humanity’s “hidden powers” and the longing within each of us to achieve a higher state of consciousness. His biography of Crowley, subtitled The Nature of the Beast (1987), has fortunately been republished.

Now Gary Lachman has written his own take on Crowley. A founding member of the new wave band Blondie—he played bass under the stage name Gary Valentine—today Lachman dedicates his time to writing about occult and esoteric matters. His biographies of Blavatsky, Swedenborg, Jung, Steiner, Ouspensky, and other spiritual luminaries, are among some of the best ever written. Like Wilson, whom he considers one of his chief literary inspirations, Lachman’s writing is lucid, down to earth, and thoroughly engaging.

In the book’s Introduction, Lachman explains how he first came across Crowley’s work. The year, he says, was 1975, and he was living in a loft space in New York City with fellow band members Debbie Harry and Chris Stein. They had what he calls a “kitschy interest in the occult,” decorating their shared living space with pentagrams, voodoo trinkets, swastikas, and other items. Lachman mentions that Debbie “was interested in UFOs, and after rehearsals she often consulted the I Ching about the next band move.”

It was through Tommy Ramone, the Ramones’ first drummer, that Lachman got his hands on a copy of Crowley’s occult novel Moonchild. After reading it, he says, “I was hooked.” Lachman’s interest in magick and the occult grew to the point where he ended up joining the O.T.O (Order Templi Orientis), an esoteric organization that Crowley himself was a member of. Lachman soon left the O.T.O and his interest in Crowley waned. 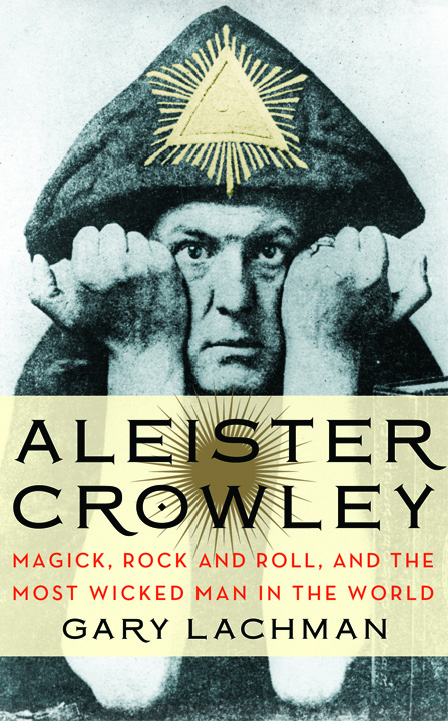 Far from idolizing Crowley, as some biographers have, Lachman’s view of the Great Beast is refreshingly sober and intelligent:

…Crowley, I think, really didn’t know his own true will and spent a lifetime pursuing a phantom. He was a man of great talent, frequent brilliance, and occasional genius who wasted himself in an adolescent rage against authority and a justification of every whim of his insatiable ego. Crowley’s life is full of tragedies but this may be the most tragic thing of all.

Lachman’s biography of Crowley is so entertaining and eloquent that it reads like a suspenseful novel. With humor, compassion, and considerable insight, he brings to light both the positive and negative attributes of the Great Beast, while also revealing him to be “an object lesson in how not to find one’s ‘true will.’”