Most people with an interest in the UFO phenomenon will be familiar with the so-called "Foo Fighters" of the Second World War. They were those perplexing, fiery balls of light that time and again plagued and puzzled military pilots. Theories for what the Foo Fighters might have been range from natural phenomena of a poorly understood nature to alien probes, and from Nazi secret weapons to equally secret devices of the Allies.

While the stories of the Foo Fighters are well known within the domain of Ufology, less well known are the accounts of the other UFOs of the Second World War. In these cases, we're not talking about small balls of light causing concern and chaos for pilots.

No, we're talking about absolutely massive UFOs - not unlike those of later years that became known as "Mother-Ships."

One classic, stand out case dates back to 1942, the details of which were recorded officially by the British military. Documentation of December 2, 1942 tells the story - under the heading of "Report by the Crew of 61 Sqdn. A/c 'J,' Captain W/O Lever, of object seen during raid on TURIN, night of November 28/29th, 1942."

Bomber Command was told: "Herewith a copy of a report received from a crew of a Lancaster after a raid on Turin. The crew refuses to be shaken in their story in the face of the usual banter and ridicule."

With that all said, let's now take a look at the report itself. It reads as follows (QUOTE):

"The object referred to above was seen by the entire crew of the above aircraft. They believe it to have been 200-300 feet in length and its width is estimated at 1/5th or 1/6th of its length. The speed was estimated at 500 m.p.h., and it had four pairs of red lights spaced at equal distances along its body. These lights did not appear in any way like exhaust flames; no trace was seen. The object kept a level course.

"The crew saw the object twice during the raid, and brief details are given below:

"(i) After bombing, time 2240 hours, a/c height 11,000 feet. The aircraft at this time was some 10/15 miles south-west of Turin traveling in a north-westerly direction. The object was traveling south-east at the same height or slightly below the aircraft.

"(ii) After bombing, time 2245 hours, a/c height 14,000 feet. The aircraft was approaching the Alps when the object was seen again traveling west-south-west up a valley in the Alps below the level of the peaks. The lights appeared to go out and the object disappeared from view. 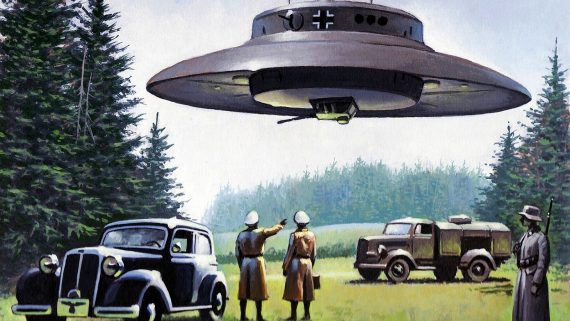 "The Captain of the aircraft also reports that he has seen a similar object about three months ago north of Amsterdam. In this instance it appeared to be on the ground and later traveling at high speed at a lower level than the heights given above along the coast for about two seconds; the lights then went out for the same period of time and came on again, and the object was still seen to be traveling in the same direction." (END OF QUOTE)

Very few people will need to be told that neither the Allies nor the Axis powers were building, or deploying, vehicles that were close to 300 feet in length and which had the ability to fly at around 500 miles per hour and across the skies of war-torn Europe. Indeed, today's Boeing 747-400 "Jumbo Jet" is only 231 feet and 10 inches long.

More than seventy years have now passed since this very curious saga unfolded. It is, therefore, highly unlikely we'll ever know for sure what the crew of 61 Squadron encountered on that fateful night they bombed Turin. All we can say for sure is that something of immense size and high-speed was cruising around the skies of Europe in the early 1940s. No way it was ours.