Has the “Flat Earth Theory” Found A New Audience?

It's the last thing that most would ever think they would have to make a case for in the modern world: why the Earth is indeed a globe, and not a flat plane covered with topographical features like mountains and valleys, drifting along like an island in space.

Strange as it may sound, this was precisely the kind of argument I recently found myself having to address, in response to a discussion that took place on an online radio show which apparently brought the so-called "flat earth theory" back into question... at least in the minds of some.

The host in question, Rob Skiba, had been interviewing a fellow named Mark Sargent, a man with a background in graphics and CGI, in which the two men had a lengthy discussion about whether evidence supported a cover-up to withhold information about Earth's true shape from the public (to his credit, and I want to be clear about this, Skiba made it known at the outset that he doesn't believe in the idea that our planet is literally flat, though admittedly, a strong sense of favor toward the idea seemed to remain present throughout the discussion).

One of my readers contacted me about the interview, and asked if I would consider listening to what the men had to say, which I did. Among the kinds of points addressed were the fact that NASA and other space agencies have continually released CGI representations of Earth over the years, and that only one supposed "photo" released by NASA actually exists, purporting to show our round globe. Furthermore, anecdotal claims have arisen over the years about visitors to Antarctica being driven away "at gunpoint." Paired with the fact that world organizations such as the United Nations feature flat earth symbolism in their logos, all of these points are believed to be "evidence" that our world is, indeed, a flat circular plane contained under a dome... a reality which elitists are working hard to hide from the public.

The fact that such "flat earth theories" have lingered into the present day is really nothing new; consider websites like that of The Flat Earth Society, which just last year announced its intention to expand its social media presence. "To kick this off," one flat-earther had written at their site, "we'll be running a celebratory campaign that showcases our supporters all over the Disk... We will be regramming the photos across our social media network so people can see our supporters all across the world."

One must ask themselves, how could someone really believe that the Earth is flat, despite what are now centuries-old determinations first made by the likes of Eratosthenes, who as far back as 235 BC was able to prove its roundness using mathematic calculations?

Let's remember that Eratosthenes was able make such determinations about our Earth's shape based on differences in the length of shadows cast by objects in two separate locations, one being the ancient Syene (now Aswan), and the other at Alexandria, on the day of the Summer Solstice. This story was illustrated famously by Carl Sagan in an episode of the classic Cosmos television series, as seen here:

Despite being able to use mathematics to determine the Earth's roundness as far back as 235 BC, the pseudoscientific interpretation of various data in modern times has nonetheless contributed to the continuation of "flat earth" theories. For instance, as discussed during Skiba's radio program on the subject, many have taken issue with the fact that images that purportedly feature our planet are "digital composites," which some interpret to mean that they are purely fabrications using CGI technologies.

In response to questions my reader had asked about such things, I recommended a page where several photos of Earth taken in recent years could be viewed, all of which are composites that were assembled from photos using satellite imaging technologies:

To give an idea of the language that I think has led to misunderstandings of what a "composite" or "synthesized" image actually is, I'll include one of the captions from the images, which reads as follows:

"Over a period of six orbits on on February 3, 2012, the recently launched Suomi NPP satellite provided the Visible Infrared Imaging Radiometer Suite (VIIRS) instrument enough time to gather the pixels for this synthesized view of Earth showing North Africa and southwestern Europe."

Let's look at precisely what "composite" or "synthesized view of Earth" actually means. What we're talking about here are sets of images that cover large portions of the Earth, and at considerably high resolutions. Experts will take the entire set of images, and then collect and combine the most visually useful portions from specific frames, and produce new composites that help reduce the presence of things like cloud formations that might obscure visibility of geographic features below. Using this technique, famous renderings such as the various incarnations known as "The Blue Marble" have been achieved, and while assembled from more than one image, they are by no means complete CGI fabrications. Again, my impression is that during the "flat earth" interview in question, images like those linked above were interpreted as being entirely digital renderings, which simply isn't the case. As far as their source, most of the images in the link above were obtained either via the Suomi satellite, or the Moderate Resolution Imaging Spectroradiometer (MODIS) aboard the Terra research satellite.

Moving along to address other points, let's head further south, and around to the idea that Antarctica holds the key to unraveling the "flat earth" secret. Specifically, I'm interested in these anecdotal reports that suggest how those who have attempted to go there and investigate have "been driven away at gunpoint."

Sure, Antarctica seems like the last place many would actually choose to visit, and hence the place no doubt maintains an air of mystique about it. This is especially the case when considering all the rumors associated with "dangers" Admiral Richard E. Byrd purportedly encountered there during the ill-fated Antarctic expedition called Operation Highjump, which some have associated with post-war Nazi conspiracies.

The truth about our coldest continent, however, and the visitors it receives, is a very different story. It was estimated in January that some 37,000 tourists will visit Antarctica this year alone (though around 10,000 won't actually set foot on shore), as discussed in a BBC article earlier this year that examined such things as the environmental impact of such heavy visitation. Additionally, as many as 5,000 people actually may reside there annually, at any of the various research stations located on the continent. In summary, if people visiting there were being "turned away at gunpoint," it seems that at least some of the 37,000 or so planning on visiting would have said something about this.

Conspiratorial scenarios such as those addressed here help show us one thing: that those who become proponents of ideas such as a "flat earth theory" have convinced themselves that their proof lies not in tangible facts or data, but within the evidences of a perceived conspiracy to conceal the "real truth" from the rest of us... which is nonsense. This is not "proof" at all, and such ideas have little -- if any -- reliance on real facts. On the other hand, a broad history of testable, repeatable data spanning more than 2,000 years proves for us, without a doubt, that our Earth is indeed a globe; just like our moon which we can see clearly on most nights, and several planets further away that are very much like our own, made visible with as little as a telescope one can purchase online. 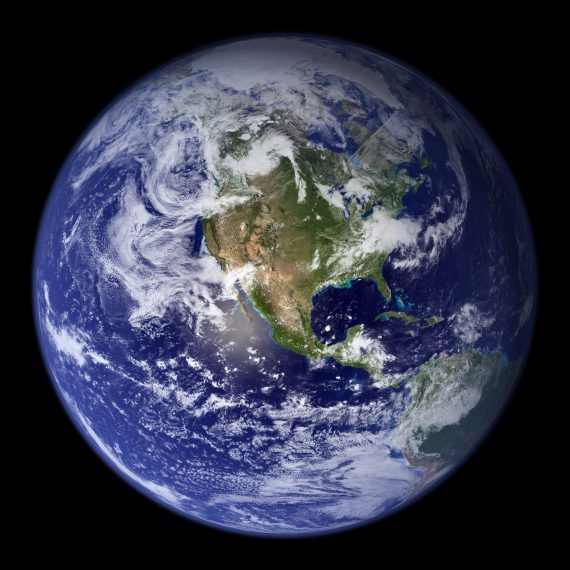 In conclusion, I would like to observe here that, generally, the attitude conveyed by many within the modern skeptical movement toward those who propose such "fringe" ideas tends to be one not only of dismissal, but also ridicule. In fairness, I think I can understand their frustration, especially in this case; it is indeed troubling that ideas such as this might find an audience today, despite centuries of scientific work aimed at properly educating the public at large, with hope of preventing such falsehoods from finding their way into modern belief systems.

Years ago, when Carl Sagan was met with pseudoscientific claims like these, of course he would differ just as strongly; but he would also rely on an evidence-based approach to refuting such ideas that was both educational, and conducive to dialogue on the issues, rather than being purely confrontational. He was a gentleman, in other words.

Somewhere along the way, we seem to have lost the idea that discourse in relation to such ideas can occur in a civil fashion, and without having to rely on heavy cynicism and ad hominem attacks to get our points across. Therefore, here I hope the discussion presented has been, perhaps in the most literal sense, "civil discourse", but also that the point has been made effectively too: any remaining advocacy of a "flat earth theory", however absurd it may be, will hopefully be viewed with a bit more scrutiny by any proponents reading about it here. I think it is fair to call the idea absurd, as most would agree: but by the same token, having such an absurd debate is important, in my opinion, because it outlines how easily people can fall into fallacious thinking, despite the vast amounts of knowledge at our disposal in the present day.

I maintain that it's alright to "ask questions", and yes, I also think that doing so is at the very heart of good skepticism. But what also must be considered is whether the questions we're asking send us along the best lines of thought that we could be following, and whether their outcome will present us with logical conclusions, or merely opinions based on circumstance, in the absence of any real facts.

This fundamental differentiation is the key, I think, and mastering this skill may be the best way to know what it truly means to be asking the right questions.