On June 14, two swimmers each lost arms to a shark in separate attacks in close proximity in the waters off the coast of Oak Island, North Carolina. The attacks came just three days after and only 15 miles away from where a girl was bitten by a shark on Ocean Isle Beach, North Carolina. What can beaches do to protect swimmers during what looks to be a long shark summer? Bring out the drones!

North Carolina shark experts say there haven’t been this many serious attacks in such a small area in many years and it may have been due to a perfect storm of conditions. The Sunday attacks were in the evening right before a new moon when the tide makes waters much deeper. Fishermen were throwing chum off of a nearby pier which may have attracted the sharks too. And there’s just a lot more people swimming this year because it’s hot (damn you, climate change!).

Of course, officials (not to mention coastal businesses fearing loss of summer revenue) say it was just one lone shark and are assuring people that the beaches are safe. Does that sound familiar?

Besides warning hot people not to cool off and telling fishermen not to try and catch fish, what else can be done to prevent further serious shark attacks? Lifeguards at Seal Beach near Los Angeles are using a shark drone to spot sharks. In just a month, they’ve been able to warn swimmers when numerous big sharks approached the shore, including a Great White that came just 100 yards from the beach.

It sounds like Oak Island would be the perfect place for a fleet of shark drones but there’s no word on whether that will happen. Instead, officials are warning people not to kill sharks because that could attract more sharks. They’d rather that beachgoers follow the advice of Dan Abel, a professor of marine science at Coastal Carolina University.

What scares me going to the beach is the sun. I'm more likely to get melanoma [than get eaten by a shark]. I'm also afraid of jet skis, getting hit in the head with a surfboard, stepping on a sting ray, getting run over by an SUV in the parking lot or getting a bacterial infection from the wastewater that pollutes our [ocean]. Those kinds of things scare me more than the sharks do.

Is he getting paid by the university, beach businesses or Steven Spielberg? 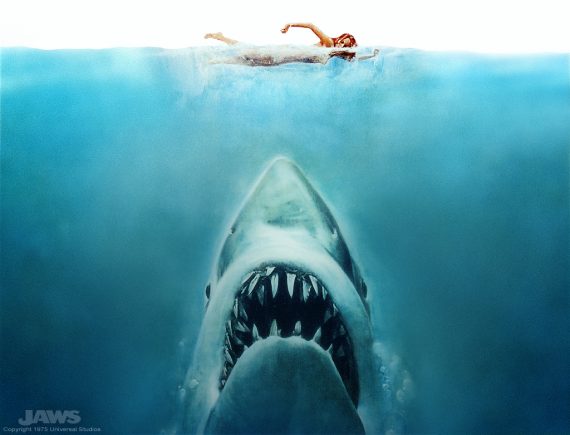