Epitaphs have long been among time honored traditions which have been employed by loved ones of the deceased, or even the departed themselves, with hope of preserving their life, philosophy, and works they did for the world to view after they are gone.

With the passing of life, many have wished for their greatest achievements to be recounted upon their gravestones. Consider the Dutch mathematician, Ludolph van Ceulen, who had the 35 digits he discovered of the mathematical constant known as Pi (expressed with the famous symbol π) printed thusly on his tombstone: "3.14159265358979323846264338327950288…"

Indeed, on occasion the messages we find on tombstones have a uniqueness about them that sets them apart from the typical gatherings of emotion and kind words loved ones might have otherwise chosen. Along these lines, a similar curious epitaph expressing the life and work of an individual had been among the many seen by Adam Petryk, a Canadian man who, over the course of a few summers, had worked at a cemetery near Kirkland Lake, Ontario.

“I worked at the local cemetery as a summer student while off from college for two summers cutting grass and helping with burials,” Adam told me via email. “I was always fascinated by the tombstone shown below, since this man possibly witnessed something that cannot be explained or couldn't express his knowledge and literally 'took it to the grave’.”

Here are the photos Adam sent me, depicting the grave of a Mr. Glenn E. Bradley, who passed away in 2007. Arguably, his is the most curious epitaph I’ve ever read: 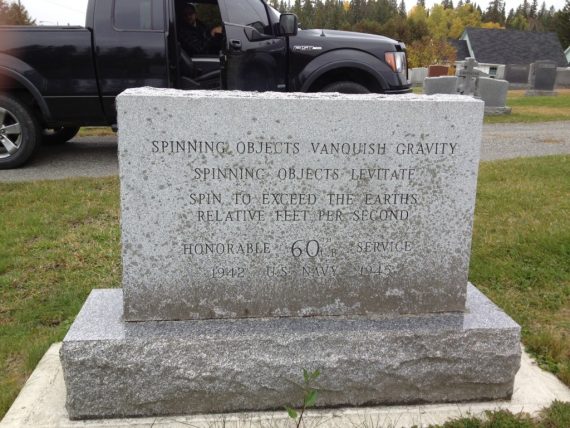 According to an obituary I found for the late Mr. Bradley online, he had indeed maintained a passionate interest in the subjects of UFOs and antigravity throughout his life:

It is with sadness that the family of Mr. Glenn Bradley announces his passing in Englehart at the Northview Nursing Home on December 27, 2007 at the age of 88 years. Glenn was born on December 28, 1918 to the late William Hutcheson and Maude Mae (Ripple) Bradley of Pennsylvania. He was a veteran of World War II with the U.S. Navy and was stationed with the Seabees in the South Pacific Ocean. Glenn retired after 36 years with the Bliss Company of Salem, Ohio where they made parts for the Canadarm on the shuttles. He then moved to Matachewan to retire. Glenn enjoyed the outdoors especially fishing which he loved. He will be remembered for his scientific work such as antigravity and his belief in U.F.O.’s."

The front of the gravestone had been somewhat less esoteric, though still noting Bradley's lifelong fascination with UFOs, and his conviction that they were indeed spacecraft from other worlds: 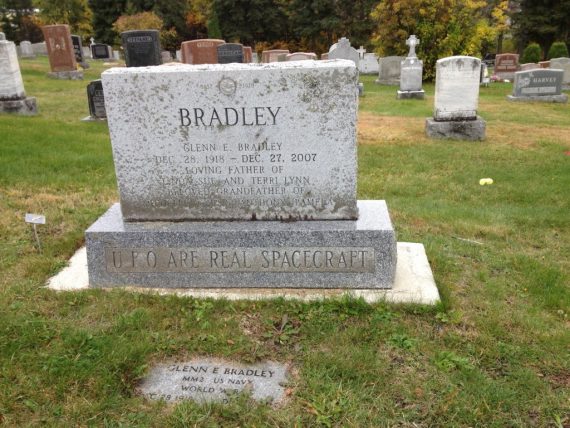 Whether or not UFOs will ever be proven to be otherworldly, Bradley's fascination with the subject is one he took with him to the grave (which, in truth, is somewhat otherworldly in itself). But the fact that the obituary mentions his "scientific work" that included antigravity is still interesting. Very little else could be found about Bradley as of the time this was written, although with little doubt, someone who may have known him, or at least knew of his work, may be able to provide further details.

It would be interesting to learn whether MU readers may know anything about Glenn E. Bradley's interest and possible research with antigravity and related subjects. If you've heard of Bradley or any public work he may have been involved with, please consider emailing me here.

Conspiracies of the Sex Pistols Kind