The story of the so-called Jersey Devil is almost as legendary as the tales that surround such famous monsters as Bigfoot, the Loch Ness Monster, and the Chupacabra. It’s a very strange saga that dates back to 1735 and to the heart of New Jersey’s Pine Barrens, which run to no less than 2,000 square miles and that are dominated by masses of conifer trees. Monster-hunter Ken Gerhard says: “Like most remote and uninhabited ranges, the Barrens are also steeped in mystery, with many colorful stories about its history and lore.”

The tale begins with a certain Mother Leeds. She was a sinister figure who lived in the Pine Barrens and who, when pregnant for the thirteenth time, essentially placed a curse on the unborn child, something which ensured that it took on a hideous form. It was highly appropriate that on the night Mother Leeds went into labor, a wild storm bruised and battered the area, shaking the trees and filling the skies with crashing thunder and huge lightning bolts.

The storm proceeded to get worse and worse, and reached its peak as the demon baby was born. Although “baby” is hardly an apt term to use. The hideous child was described as having leathery wings, a horse-like head, and hooves instead of feet. The Jersey Devil wasted no time in making good its escape: it opened its wings, took to the air, and shot out of the chimney of Mother Leeds’ home, and quickly making a new home for itself in the dense and mysterious Pine Barrens.

While the story sounds like the stuff of legend and nothing else, there can be no denying the fact that people local to the area have reported astonishing encounters with something malevolent and hideous that they believe was the Jersey Devil. For example, on December 14, 1925, the Bridgeton Evening News ran an article titled “Dog-Like Beast Ate Seven Chickens Before Shot Killed It—Hundreds Fail to Identify Species.” The article read as follows:

“What resembled a ‘Jersey Devil’ as much as anything else was shot and killed near Bacon’s Neck last week and was viewed and even photographed by hundreds over the weekend. No one could name the animal with certainty.

“William Hyman, who manages the old Glaspell farm for Barton F. Sharp, was awakened before daybreak by a racket in his chicken coop. He dressed and went out carrying his gun. An animal ran from the coop with a chicken in its mouth. Hyman fired and fur flew but the animal went on.

“As long as he was up at 4 a.m., Hyman decided to start work. Soon the chickens called again and he ran to the coop in time to see the same animal leaving with another fowl. He fired again in the semi-darkness but failed to kill. This time he followed the animal into the meadows.

“A half mile from the house he caught up with it again and the animal turned and attacked him. He blazed away and it fell. He went to it and it was dead.

“About the size of an Airedale dog it has black crinkly hair. On its hind feet it had four webbed toes. It didn’t run like a dog but hopped more like a kangaroo. Its front quarters are higher than its hind, which crouched as it ran, Hyman declared. Its rear teeth are prong like, the upper ones fitting into the center of four prong lower ones. Its eyes are still a bright yellow and its jaw is unlike a dog, wolf or coyote. 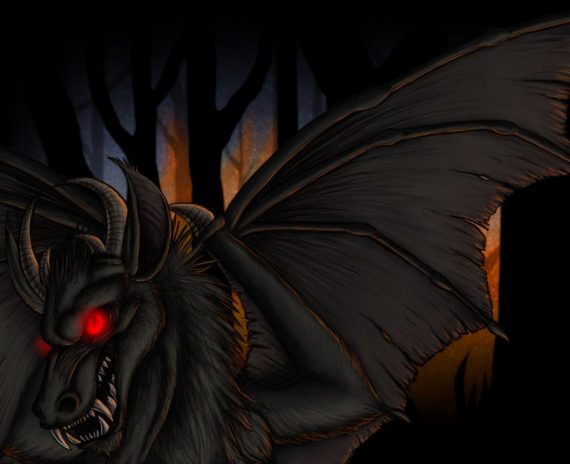 “There you have the description as given by visitors on the farm yesterday who add that despite the weather, the dead animal is still limber instead of being stiff. It took and apparently ate seven chickens the night it was seen and eventually killed.

"Guesses include one which suggests that it might be a dog, long starved and half wild. Others suggest that it is a cross between a dog and a wolf, but most of those who have seen it haven’t any guess to offer. Any one certain of the way a Jersey Devil looks is requested to view the beast and report."

Twelve years later, on July 28, 1937, the Jersey Evening Bulletin entertained its readers with a feature headlined “The Devil Went Down to Jersey.” The unnamed journalist wrote:

“DOWNINGTOWN, JULY 28. - Chester county’s green and verdant countryside was trying to shake itself back into a state of normalcy today after an all-night hunt for the 1937 version of the old Jersey Devil. Armed with guns and clubs, and led by a pack of dogs whose barking in the moonlight almost reached blood-curdling heights at times, a hastily-formed posse of two dozen farmers skipped their sleep last night to scour the hills and fields for a bounding critter with huge eyes.

“The strange monster was reported shortly after 9PM by Cydney Ladley, a paper mill employee, who lives near Milford Mills, just north of here. Rushing into town with bated breath, Ladley, his wife and Mrs. Chester Smith, a neighbor, told of seeing the creature on a back road near their home just as dusk was settling over the hills.

“‘It leaped across the road in front of my car,’ Ladley said. ‘It was about the size of a kangaroo, was covered with hair four inches long and it hopped like a kangaroo. And eyes! What eyes!’

“‘And how it jumped,’ chimed in Mrs. Ladley.

“The descriptions were enough. Within a half hour more than 20 neighboring farmers had taken their shotguns, unleashed their hounds and were abroad in the moonlight, resolved to track the prowler to its lair.”

Today, sightings of the Jersey Devil are far less prevalent and chilling than they were in decades past. That does not mean, however, that you should let your guard down if, one day, you find yourself deep in the heart of the New Jersey Pine Barrens. The deadly beast just might be circling silently overhead, getting ready to launch a deadly attack.

Pond Explodes in Canada While Lakes Disappear in Georgia