Say Goodbye to the Eastern Cougar

Big cat fans are mourning the extinction of the eastern cougar (Puma concolor couguar) after the U.S. Fish and Wildlife Service announced it is removing the big cat from the endangered species list because it hasn’t found any credible evidence of the existence of one in at least 70 years. Those cougars being spotted in eastern North America are most likely western cougars or mountain lions (Puma concolor) that have extended their range or escaped from negligent pet owners. What happened to the eastern cougar?

The eastern cougar or eastern puma is (or, as of now, was) a subspecies of the mountain lion. Its range was from Canada (southeastern Ontario, New Brunswick, southern Quebec) south to South Carolina and west to Illinois and Michigan. Its southern ranged stopped at what was once the northern range of the Florida panther, of which today only about 160 exist in Florida.

Once the top predator across North America, the demise of all cougars and particularly the eastern cougar coincided with the arrival of European settlers The eastern cougars were hunted because of their real and perceived threats to livestock but the drive to extinction was hastened by the killing of white-tail deer, their real food, and the deforestation of its habitats.

Going by official records, the last known eastern cougars were killed in New Brunswick in 1932 and in Maine in 1938. Bureaucracy moves slowly and it wasn’t until 1973 that the eastern cougar, by then already extinct, was recognized as endangered.

What does the loss of the eastern cougar mean? Michael Robinson of the Center for Biological Diversity gives the bad news.

The extinction of the eastern puma and other apex carnivores such as wolves and lynx upended the ecology of the original colonies and beyond. Over a century after deer went extinct in the Northeast, they have returned with a voracious vengeance, and botanists lament the disappearance of formerly abundant plant communities. We have forests that have lost the top and the bottom of the food chain.

When we’re the only link left, it won’t be a food chain anymore. 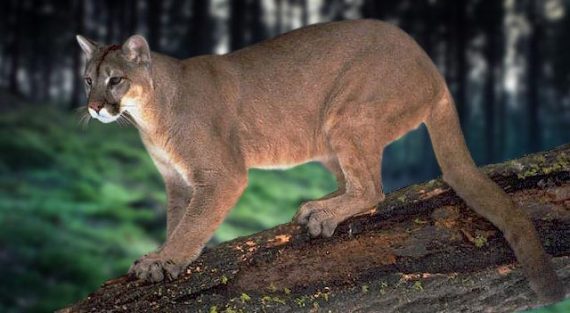 When the BBC Banned the Bomb