The Vampire of Bladenboro

Indeed, sightings and killings had been going on since late December and plunged the good folk of the small town of Bladenboro, North Carolina into states of fear and outrage. Although many eye-witnesses described the animal as looking like a black leopard, there were some who said it was more akin to a sleek-looking bear. Adding to the confusion, the tracks of the creature were said to be dog-like, rather than feline in appearance.

The most terrifying aspect of the story, however, was the claim of both the newspaper and the witnesses that the creature “sucks blood from its victims.” And thus was born a vampire legend. The victims were, for the most part, dogs. There was, however, one attack on a person; the unfortunate soul being Mrs. C.E. Kinlaw. Fortunately, she was not injured: the animal simply lashed out at her, when its attempts to attack and kill her dogs were thwarted. 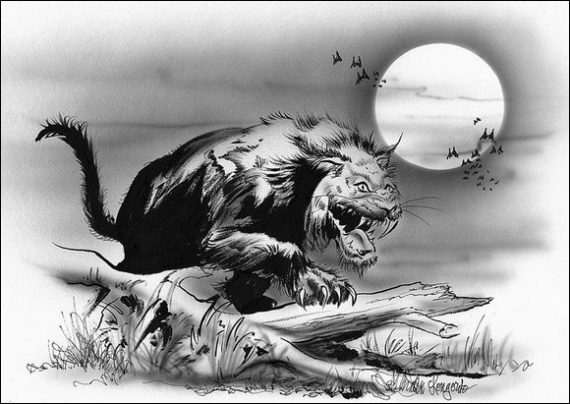 She stated afterwards: “After we first saw it, and my husband scared it away, it circled back and came running toward the porch where I was standing. I screamed and it stopped on all fours, turned and ran off. You know, the Bible speaks of sights and wonders before the end of time. This could be one of them. The Bible’s coming true, day by day.”

One of those whose dogs unfortunately were killed by the creature was Johnny Vause. He said: “My dogs put up a good fight. There was blood all over the porch, big puddles of it. And there was a pool of saliva on the porch. It killed one dog at 10:30 and left it lying there. My dad wrapped the dog up in a blanket. That thing came back and got that dog and nobody's seen the dog since. At 1:30 in the morning, it came back and killed the other dog and took it off. We found it three days later in a hedgerow. The top of one of the dogs heads was torn off and its body was crushed and wet, like it had been in that thing's mouth. The other dog’s lower jaw was torn off.”

As the carnage continued, there were stories of full-grown pigs found with their skulls crushed and their limbs torn off in violent, bloody fashion. Other farm animals were found dead, their severed heads completely missing. The entire town was on edge. Children were kept away from school. And practically no-one wanted to walk the streets of town after sunset. This was hardly surprising: a deadly, monstrous killer was in their very midst.

An unnamed witness commented: “I got two dogs, Niggy, the little black one, and Peewee, a brown one, that’s bigger. Me and my wife were sitting here in the living room. We heard the dogs get awful restless. My front light was on and Larry Moore had his back light on. I glanced out the window and saw this thing. It had me plumb spellbound. It was about 20 inches high. It had a long tail, about 14 inches. The color of it was dark. It had a face exactly like a cat. Only I ain’t ever seen a cat that big. It was walking around stealthy, sneaky, moving about trying to get to Niggy and Peewee. I jumped for my shotgun and loaded it and went out to shoot it, but it moved into the darkness right away and I couldn't find him again.”

Such was the sheer level of hysteria that gripped Bladenboro, at one point, on January 5, 1954 more than five hundred people – all armed to the teeth with rifles and pistols – roamed the area’s swamps and woods; something that the local police took a decidedly dim view of. The authorities took an even dimmer view when, on the 6th, the figure was estimated to be in the region of eight hundred, and twenty-four hours later, it was said to be in excess of one thousand.

There were sighs of relief when a bobcat was shot and killed in the area and a leopard was reportedly hit by a car. Problematic, however, was the fact that the attacks continued, something which suggested the animal was not a solitary one. Worse, there might even have been an entire pack of the creatures.

Whatever the truth of the matter, the issue was never resolved to the situation of the people of Bladenboro: by mid-January the killings were finally over. Everyone sighed with relief. The saga of the vampire-beast of Bladenboro remains a staple part of the town, and to the extent that, in 2008, in 2008 the History Channel’s popular show, Monster Quest, dedicated an entire episode to the legend of the blood-sucking, skull-crushing beast that provoked so much terror all those decades earlier.

The Macabre “Gypsy” in Black