UFO Repeaters! Seeing is Believing, The Camera Doesn't Lie, is the new book from Timothy Green Beckley's Global Communications company. If you are familiar with Tim's long links to the UFO phenomenon, you'll know that he's particularly interested in the so-called "Contactee" aspect of the subject. It had its heyday in the 1950s and 1960s, but remains a not insignificant part of today's Ufology.

And, it's the Contactee movement that dominates the 300 pages of UFO Repeaters! Of course, given that the book focuses on photographs and film-footage of a UFO nature - and it's predominantly Contactee/Space Brother-themed - you know the photos are going to be controversial. After all, just about everything of a Contactee nature is controversial, so why should the matter of saucers and celluloid be any different?

Tim openly acknowledges all of this from the outset, when he says: "We were not there when these photos were taken so we only have the reliability of the observers and those that claim to be experts at analyzing UFO photos. It's up to each of you to make the ultimate decision." Indeed, it is up to us. And it's to Tim's credit that he acknowledges people are going to be of varying, and perhaps of wildly varying, mindsets when it comes down to interpreting the imagery under the microscope.

Plus, Tim has some interesting and alternative theories concerning the pictures that he presents for his readers. He doesn't discount the possibility that some of the photos may have been the work of the Contactees themselves. Not in the sense that they were hoaxers (although some certainly were), but from the perspective that the witnesses could have personally and unknowingly manifested the images.

On this matter, Tim speculates, such a thing might be achieved in a fashion not unlike the theory that poltergeist activity has no external, supernatural entity-style component, but is generated by a person who is present at the location where that same activity is taking place. This is an interesting concept and one that adds another, thought-provoking layer to the controversy of the Contactees and their saucer photos. So, with that all said, let's take a look at some of the cases Tim and his crew of co-writers focus on.

There's the 1970s-era saga of Stella Lansing, a woman who claimed the ability to "call down" ETs and photograph them. Echoing Tim's comments on the mysterious matter of poltergeist activity, is the revelation that although Lansing's photos appeared to show alien craft, nothing unusual was seen when the images were captured - she was simply driven to point her camera at certain portions of the sky.

Is it feasible that the human mind can project images onto film? That's the fascinating concept we are left to ponder on, when it comes to Lansing. Ufologist Dr. Berthold E. Schwarz is quoted as stating: "I was with [Lansing] many times when she was filming and also saw many of her films."

South African Elizabeth Klarer comes under scrutiny, too, as does her collection of photos of alleged flying saucers - all taken in the 1950s. Klarer's story is standard Contactee stuff, with Klarer reportedly meeting an alien named Akon, being invited aboard his UFO, and taken to his home planet - which was the undeniably alien-sounding Meton. 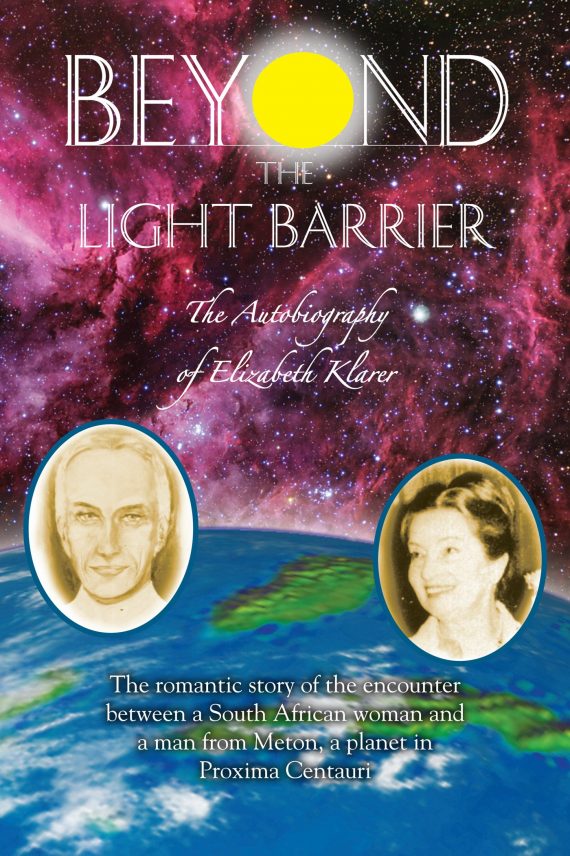 Klarer and Akon were instantly attracted to each other, to the extent that nature took its course and nine months later out popped little Ayling, a half-human, half-alien, cosmic kiddo. Of course, many scoff loudly at such accounts. Indeed, Tim notes that Klarer's 1980 book on her claimed experiences, Beyond the Light Barrier, was written "more in the style of a romantic novel rather than as a more straightforward autobiography." But, it's Klarer's photos that are the focus: real saucers, psychic projections, or hoaxes? Again, the decision is that of the reader.

For me, the most fascinating parts of the book are those which I know Tim, himself, finds particularly intriguing - such as the claimed contacts and photos of one of the 1950s most famous Contactees, Howard Menger, who is the subject of almost 40 pages of the book. Again, Tim keeps a balanced approach: he offers us numerous examples of Menger's photos, but also notes that, "I am not blind to the fact that there are some inconsistencies in Howard's recollections."

There's also Tim's write-up of his 1981 visit to one of the UK's most famous UFO hotspots, the English town of Warminster. This is a very entertaining section, written in definitive road-trip style. You will not be surprised to learn that we are treated to numerous photos of anomalous objects in the skies of Warminster.

In addition, there are literally dozens and dozens of other close encounter cases presented - and, as I said earlier, predominantly of a Contactee nature and all with accompanying photos. Many of them you will likely never have come across before. And that goes not just for the cases, but for the photos and stills from footage, too. And, as I also note several times above, Tim offers his readers alternative theories for what might be the cause and source of the imagery - and remains balanced on the validity or otherwise of some of the more inflammatory photos. He and the team also deeply address why, exactly, so many people become UFO repeaters.

I will leave the final word to Tim, who says in UFO Repeaters!: "I think this is a book you will get a lot out of. It certainly is a photo album like no other, and it's probably something you could use as an ice break to show your friends."