Trying to convince the skeptics and the doubters that the UFO phenomenon is one of all-too-real proportions is never an easy task. Most of the time I don't even bother. After all, it's their loss, not mine, if they choose to remain ignorant. That's to say, ignorant in terms of being uniformed, and ignorant as in being jerks for refusing to acknowledge the value of the data.

On those occasions when I can be bothered to debate the skeptics on the matter of UFOs, I often make use of government, intelligence, and military files to make my point. The reason why is simple: many official records on unidentified flying objects - and particularly those from the 1940s and 1950s - are of excellent caliber.

A perfect example, is a collection of U.S. Air Force documents that detail an astonishing wave of UFO activity that occurred in early 1958. They are files declassified under the terms of the Freedom of Information Act, but which have not generally received the positive commentary they deserve.

The mystery began on the night of March 9, 1958. The location: a now-closed U.S. Army installation on the Panama Canal Zone called Fort Clayton. It was around 8:00 p.m. when a UFO was tracked, by anti-aircraft personnel, in the Canal Zone area. Further blips soon appeared on the screen. Clearly something unusual was afoot.

It turns out that Fort Clayton was not the only base monitoring unusual aerial activity. Radar staff at Fort Amador, Flamenco Island were also tracking something airborne and unknown. In fact, they were tracking two UFOs - both of which maintained a circular pattern above a nearby installation, Fort Kobbe. Their heights, however, fluctuated between 2,000 and 10,000 feet. It was at this time that staff at Taboga Island's Track Radar Unit confirmed they were keeping a careful watch on certain unknowns, too.

Shortly before midnight, personnel at Fort Amador chose to take a new and novel approach to try and identify the UFOs: they bathed them with powerful, ground-based searchlights. The response was incredible: in no more than a handful of seconds the UFOs headed skywards from 2,000 to 10,000 feet.

Official records on this particularly eye-opening development state: "...this was such a rapid movement that the Track Radar, which was locked on target, broke the Track Lock and was unable to keep up with ascent of the objects. As Track Radar can only be locked on a solid object, which was done in the case of the two unidentified flying objects, it was assumed that the objects were solid." 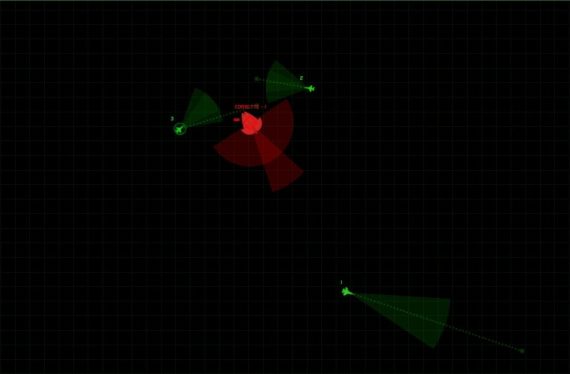 This strange and bizarre activity continued into the early hours of March 10 - something which saw UFOs hovering and accelerating to speeds around 1,000 miles per hour, and unknown objects tracked on radar. Later that same day, UFOs were monitored clearly reacting to the presence of aircraft dispatched to intercept them. The files also talk of a UFO report from the captain of a Pan American Airlines DC-6 aircraft that was described as being bigger than the plane and which was headed in a southerly direction.

Of course, none of this gives us any real indication of what the UFOs were. However, the reference to objects hovering high in the sky, definitive unknowns accelerating to speeds of around 1,000 m.p.h, and of radar systems that were "unable to keep up with ascent of the objects," which were "assumed" to be "solid," collectively suggest vehicles of highly advanced natures were in evidence in the Canal Zone in March 1958. And, of course, let's not forget that the UFOs responded, in amazing fashion, to being lit up by searchlights.

And that was just the tip of the iceberg. You can read the original, complete document online, at this link, by scrolling down to page 15 (and onwards).

So, the next time a smug skeptic tells you UFOs don't exist, direct them to the many and varied files that have surfaced under Freedom of Information legislation. It's an ideal way to shut them up.

Book Review: “Aleister Crowley: Magick, Rock and Roll, and the Wickedest Man in the World” by Gary Lachman