UFOs and the Robertson Panel

This past weekend I spoke at the annual "Contact in the Desert" gig at Joshua Tree, California. The subject of my lecture: how and why the Contactees of the 1950s - such as George Adamski, Frank Stranges, George Hunt Williamson, and George Van Tassel - became the subjects of extensive, official government agency files, all of which have now been declassified under the terms of the Freedom of Information Act.

In passing, I made a mention of the CIA's Robertson Panel which - also in the 1950s - recommended that Ufologists should be watched closely. I was intrigued to note, however, that many people at the conference were unaware of the origins and intricacies of the Robertson Panel. So, with that in mind, I thought now would be a good time to spell out the history of this particular group and how it came to exist.

On December 2, 1952 the CIA’s Assistant Director H. Marshall Chadwell noted, in a classified report on UFO activity in American airspace: “Sightings of unexplained objects at great altitudes and traveling at high speeds in the vicinity of major U.S. defense installations are of such nature that they are not attributable to natural phenomena or known types of aerial vehicles.”

Believing that something really might be afoot in the skies of America, Chadwell prepared a list of saucer-themed recommendations for the National Security Council (QUOTE BEGINS):

1. The Director of Central Intelligence shall formulate and carry out a program of intelligence and research activities as required to solve the problem of instant positive identification of unidentified flying objects.
2. Upon call of the Director of Central Intelligence, Government departments and agencies shall provide assistance in this program of intelligence and research to the extent of their capacity provided, however, that the DCI shall avoid duplication of activities presently directed toward the solution of this problem.
3. This effort shall be coordinated with the military services and the Research and Development Board of the Department of Defense, with the Psychological Board and other Governmental agencies as appropriate.
4. The Director of Central Intelligence shall disseminate information concerning the program of intelligence and research activities in this field to the various departments and agencies which have authorized interest therein." (END OF QUOTE)

Forty-eight-hours later, the Intelligence Advisory Committee concurred with Chadwell and recommended that “the services of selected scientists to review and appraise the available evidence in the light of pertinent scientific theories” should be the order of the day. Thus was born the Robertson Panel, so named after the man chosen to head the inquiry: Howard Percy Robertson, a consultant to the Agency, a renowned physicist, and the director of the Defense Department Weapons Evaluation Group.

Chadwell was tasked with putting together an expert team of people in various science, technical, intelligence and military disciplines and have them carefully study the data on flying saucers currently held by not just the CIA, but the Air Force too – who obligingly agreed to hand over their UFO files for the CIA’s scrutiny.

The overall conclusion of the Robertson Panel was that while UFOs did not appear to have a bearing on national security or on the defense of the United States, the way in which the subject could be used by unfriendly forces to manipulate the public mindset and disrupt the U.S. military infrastructure did have a bearing – and a major one, too - on matters of a security nature. According to the panel’s members:

“Although evidence of any direct threat from these sightings was wholly lacking, related dangers might well exist resulting from: A. Misidentification of actual enemy artifacts by defense personnel. B. Overloading of emergency reporting channels with ‘false’ information. C. Subjectivity of public to mass hysteria and greater vulnerability to possible enemy psychological warfare.”

There was also a recommendation that a number of the public UFO investigative groups that existed in the United States at the time, such as the Civilian Flying Saucer Investigators (CFSI) and the Aerial Phenomena Research Organization (APRO), should be “watched” carefully due to “the apparent irresponsibility and the possible use of such groups for subversive purposes.”

The panel also concluded that “a public education campaign should be undertaken” on matters relative to UFOs. Specifically, agreed the members, such a program would “result in reduction in public interest in ‘flying saucers’ which today evokes a strong psychological reaction."

They added: "This education could be accomplished by mass media such as television, motion pictures, and popular articles. Basis of such education would be actual case histories which had been puzzling at first but later explained. As in the case of conjuring tricks, there is much less stimulation if the ‘secret’ is known. Such a program should tend to reduce the current gullibility of the public and consequently their susceptibility to clever hostile propaganda."

“In this connection, Dr. Hadley Cantril (Princeton University) was suggested. Cantril authored ‘Invasion from Mars,’ (a study in the psychology of panic, written about the famous Orson Welles radio broadcast in 1938) and has since performed advanced laboratory studies in the field of perception. The names of Don Marquis (University of Michigan) and Leo Roston were mentioned as possibly suitable as consultant psychologists. 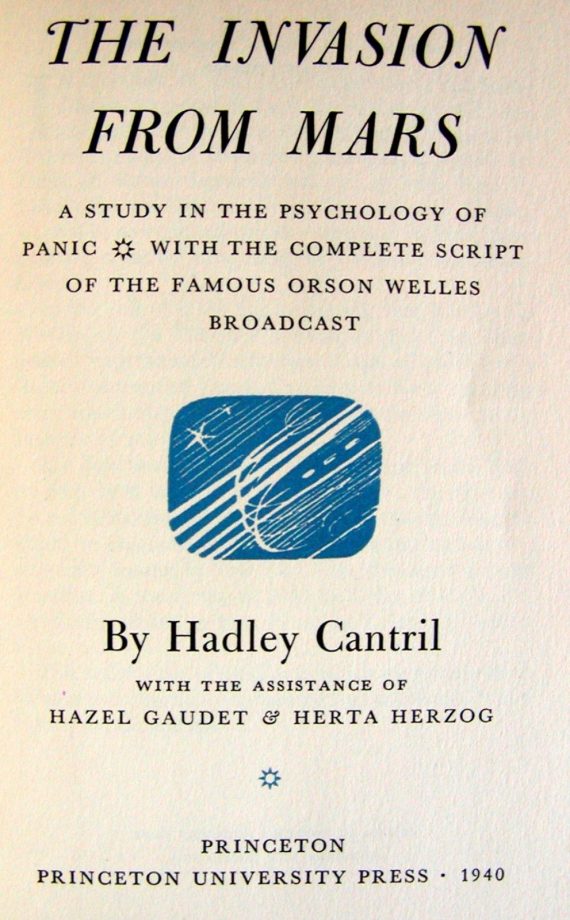 “Also, someone familiar with mass communications techniques, perhaps an advertising expert, would be helpful. Arthur Godfrey was mentioned as possibly a valuable channel of communication reaching a mass audience of certain levels. Dr. Berkner suggested the U. S. Navy (ONR) Special Devices Center, Sands Point, L. I., as a potentially valuable organization to assist in such an educational program. The teaching techniques used by this agency for aircraft identification during the past war [were] cited as an example of a similar educational task. The Jam Handy Co. which made World War II training films (motion picture and slide strips) was also suggested, as well as Walt Disney, Inc. animated cartoons.”

So, what we have with the Robertson Panel is a prestigious group of people who were far less focused upon what UFOs were or weren't, but who were far more intrigued and concerned by the psychological reactions that might be provoked by reported UFO encounters.

That meant the way in which the subject could be manipulated - by potentially hostile forces - for propaganda-based reasons, to clutter the nation's emergency channels, and to provoke widespread hysteria. In other words, the Robertson Panel was a definitively unique body that recognized the UFO controversy had the potential to impact upon society in a number of decidedly unusual, and possibly even dangerous, ways.

Virgin Births May Save Sawfish From Extinction