A British Bigfoot: Hoax or Reality?

Back in 2012, I wrote a book called Wildman!, a study of a phenomenon as bizarre as it is perplexing. We're talking about Bigfoot-type reports in the UK. I note in the pages of my book that the British Bigfoot is clearly not a flesh and blood animal. All of the cases I have investigated have an air of the supernatural, the paranormal, or the Fortean attached to them.

I'm personally convinced that the vast majority of the people I have interviewed on this very controversial subject are entirely genuine and are just looking for the answers to their extraordinary experiences. There are, however, one or two incidents and individuals that I have my suspicions about. As in suspicions of hoaxing. Gavin, who I met personally around 2000/2001, claimed a truly sensational encounter with a Bigfoot-like entity in England's Cannock Chase woods, and specifically at one of its most famous attractions: namely, the Glacial Boulder.

Made out of granite, the boulder is both large and impressive. It is also made highly curious by virtue of the illuminating fact that there are no natural granite out-crops anywhere in the area – at all. Indeed, the nearest rock of this specific type can be found within the picturesque confines of the Lake District, which is more than 120 miles to the north, and on Dartmoor, Devonshire, no less than 165 miles to the south-west.

The boulder itself, however, has been matched conclusively to a rocky outcrop at Cniffel in Dumfries & Galloway, which is over 170 miles from the Chase in the Southern Uplands of Scotland. At some point during the last Ice Age, it is now generally accepted, the boulder was apparently carried by the great glaciers down the length of the British Isles and to its present location – and what would prove to be its final resting place - on the Cannock Chase.

As Gavin explained his sensational story to me, it was on a winter’s night in 1997, when he and his girlfriend were parked in his car near the boulder, doing what courting couples have always done since the invention of the automobile, when his girlfriend suddenly let out a loud and hysterical scream: standing atop the boulder was a large hairy man, waving his arms in a wild, crazed fashion at the star-lit sky. Gavin quickly jumped into the front seat of the car and floored the accelerator. 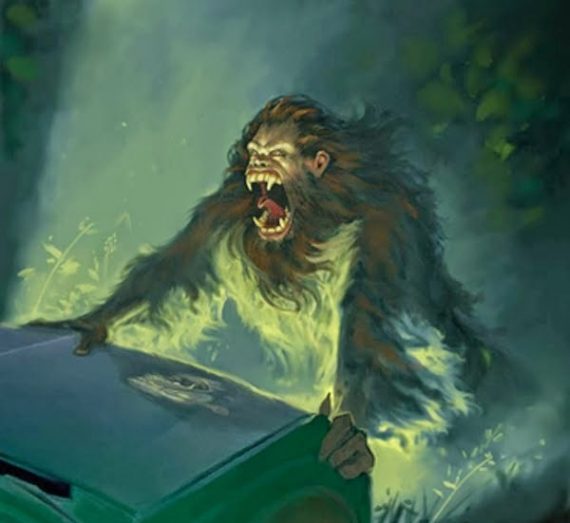 Tires spun, dirt flew into the air, and the car shot away at high speed, but not before the creature supposedly succeeded in jumping onto the hood of his car. For five minutes, it valiantly hung on, before finally being thrown to the ground. Gavin looked in his rear-view mirror and was horrified to see that the creature was already back on its feet and running at high-speed into the depths of the surrounding countryside.

In fairness to the more skeptical-minded, it must be said at this point that several other people who have also met Gavin are convinced that his tale is simply that: merely a tale (of the very tallest variety) and nothing more. For his part, Gavin has been careful – time and again - to point out in response that he has nothing to gain – and absolutely everything to lose – by fabricating such a strange and unbelievable story.

And in that respect he is most certainly not wrong: claiming to all and sundry that you have seen a Bigfoot-type entity roaming around the Cannock Chase's Glacial Boulder at night is, unfortunately, unlikely to result in anything other than the rolling of eyes, a distinct shaking of the head, and overwhelming hoots of both derision and laughter. Nevertheless, and despite of such criticism, Gavin continues to stand by his story.

Sheep Sacrifices of the Occult Kind