For those of us who want to see science fiction innovations become realities in our lifetime, that day is here for a big one. A British man has become the first person in the world to be fitted with a bionic eye and he can now see after years of partial blindness due to macular degeneration.

Ray Flynn suffers from age-related macular degeneration (AMD), an increasingly common disease that robs a person of their central vision so that they see a black hole or blob in the middle of their field of vision. For Flynn, as for many sufferers, it means he can’t see faces, use an ATM, watch TV, drive or perform any activity that requires central vision. Fortunately, most people afflicted with AMD, including Flynn, still retain some of their peripheral vision.

That’s where the bionic eye comes in. It’s called the Argus II and it’s actually a multi-part device manufactured by Second Sight Medical Products in Sylmar, California. It starts with special eyeglasses fitted with a miniature camera. Images from the glasses become digital impulses that are transmitted wirelessly to electrodes inside an implant attached in the back of the eye to the retina. The electrodes stimulate the remaining operational retina cells, causing vision signals to be sent to the brain.

Ray Flynn’s bionic eye was implanted by doctors at the Manchester Royal Eye Hospital. Although it had been previously used for an extremely rare form of blindness, this was the first time the operation was performed on a patient with macular degeneration – the biggest cause of sight loss in Great Britain and a condition that affects at least 15 million Americans. 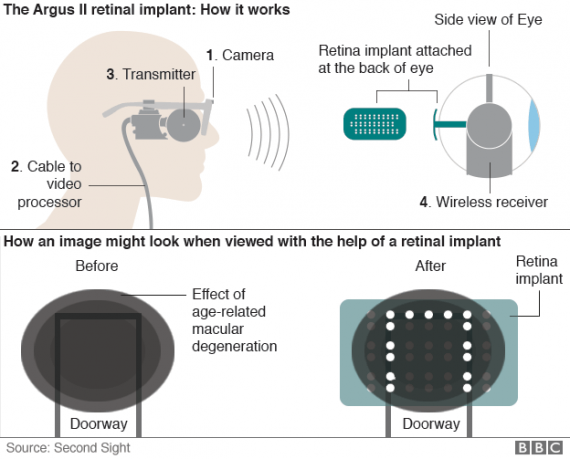 Does it work? Within two weeks, Flynn was able to identify horizontal, vertical and diagonal lines. Although he cannot see the exact image that is in the hole in his vision, he can identify the outlines of people and objects – even with his eyes shut. This information, combined with his peripheral vision, helps his brain compose what he’s seeing. Over time, his doctors believe his brain will be able to recreate exactly what Flynn has his eyeglass camera pointed at.

While it may sound rudimentary, for those who are affected by macular degeneration or are watching loved ones struggle with it, this bionic eye is the true definition of a miracle.

Philae Shuts Down After Scientists Discuss Life on Comet 67P