Comet 67P/Churyumov-Gerasimenko is not very big to begin with, as the Rosetta spacecraft and its Philae lander have confirmed. Now it looks like it’s getting smaller. New photos from Rosetta show that 67P may be disappearing down its own giant sinkholes. What’s going on here? Is 67P an abandoned alien mining site? A nursery for giant sandworms?

The new images from the Osiris (Optical, Spectroscopic and Infrared Remote Imaging System) narrow angle camera on Rosetta show at least 18 pits scattered across the comet’s face (insert your acne jokes here) ranging from 10 to 200 meters (650 feet) in diameter. A few of the large holes are up to 200 meters deep. Earlier photos of 67P showed these pits, but after seeing the new images, researchers are now referring to them as sinkholes. Why?

According to their report in the journal Nature, it’s the gases. Specifically, they can see tiny jets of gases blowing dust around the holes. The holes are too deep to be impact craters so they believe they were caused by underground ice melting, leaving a covered cavity that ultimately collapsed. The jets are small pockets of ice evaporating quickly as 67P approaches the sun. The relatively smooth sides of the pits indicates that they are fairly new and haven’t had a chance to erode.

There’s something else besides gases in the sinkholes – dinosaur eggs. Wait, what?

Scientist and report co-author Jean-Baptiste Vincent fills us in.

In the walls of these pits there are strange things, though we don’t fully understand what they are. We see lots of fractures and features that look like pebbles—some people call them ‘dinosaur eggs.’ They look like the primordial pieces that make up the comets to begin with.

These “eggs” are only found in the sinkholes, which means the inside of the comet is different than the surface, contradicting long-held beliefs that comets are just balls of ice and dust.

We’re sure to find out more about 67P and its sinkholes as the Rosetta mission has been extended nine months to September 2016. 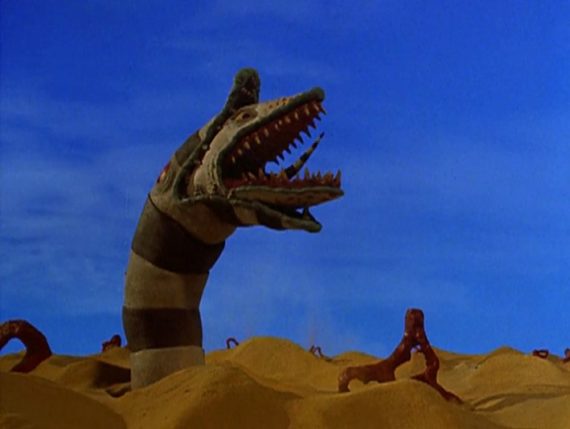 “Dog With A Human Face”