“Dog With A Human Face”

If, like me, you're a fan of the writings of Linda Godfrey - and particularly her werewolf-themed book, The Michigan Dogman - then what I'm about to share with you now is likely to be of deep interest. It's an old newspaper story - dating back more than a century - that is eerily reminiscent of some of Linda's findings. And, it demonstrates that when we dig into the past, we can sometimes find fascinating tales that have a direct bearing on the present.

The story in question was published in the pages of several newspapers, including the Pittsburgh Press on May 3, 1905, and the Rake, Iowa Register on June 15, 1905. The Register's article has the eye-catching title of "Dog With a Human Face." Its sub-title: "Strange Monstrosity Seen By Many Persons In Colorado Hills -- Attempt Capture In Vain." According to the newspaper staff, an unidentified creature had then recently been seen "roaming the hills" of Buena Vista, Colorado, and specifically in the vicinity of Wildhorse - a station on the Colorado Midland Railway.

The Register reporter continued that "a prominent ranchwoman," driving across the Arkansas River had the shock of her life when something terrible loomed into view. As she crossed one particular bridge, the woman was shocked to see a "monstrosity" standing in the road. It was terrifying enough to cause her horse to panic, "almost throwing her from the rig." Interestingly, the Register said that the river was "where the animal has its lair."

As for the creature's physical description, it went like this: "It was about the size and build of a full-grown greyhound and of a drab color, its glistening sides being covered with black spots as large as silver dollars." Its eyes were set close together and its pointed ears stood tall. But, then came the most remarkable part of the story: the long-tailed animal "had an almost human face, and a bristling red mustache ornamented the proper place upon its physiognomy." 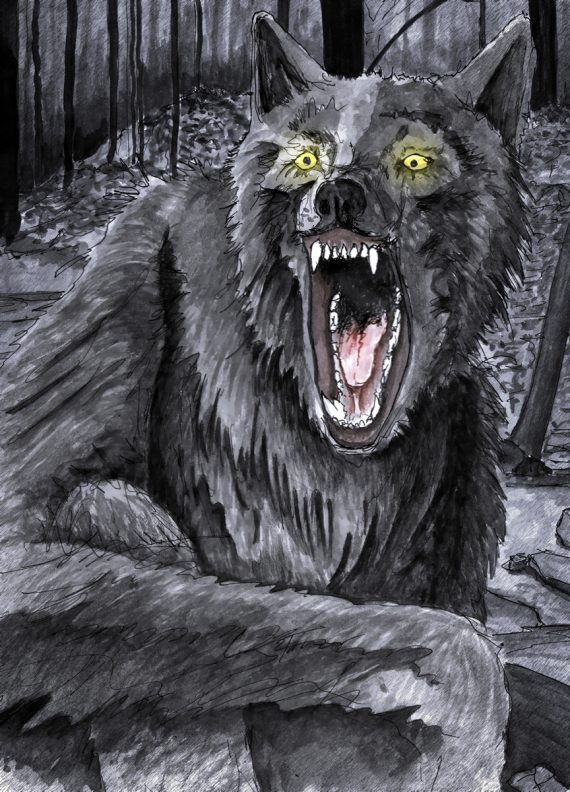 The story continued that the animal uttered a "piteous cry" and slunk away through the surrounding brush, turning back to look at the woman as it reached the top of a nearby hill. That's not all, though. There was something far more incredible to come. As it stood atop the hill the beast "punctured the rarefied atmosphere with sounds that reverberated among the crags," and...rose up onto its hind legs.

Not surprisingly, the sight of this menacing, screaming, bipedal dog-thing "compelled a pace on the part of the usually staid horse that was a revelation to the driver."

So, what was it that the woman saw? The references to a long tail and black spots, and its size and build being similar to that of a greyhound, give rise to the possibility of a large cat of some sort. Of course, the human-like face - if not a fabrication or a genuine mistake - is far more difficult to explain. As is the ability of the creature to apparently walk on both four legs and two. And yet, this latter issue is something that turns up time and time again in many of the accounts that Linda Godfrey has uncovered.

Plus, the fact that the location of the encounter was a bridge is notable. Bridges often play key roles in creature cases of a definitively supernatural kind. Take, for example, Mothman's association to Point Pleasant, West Virginia's ill-fated Silver Bridge, which collapsed into the Ohio River, in December 1967. Then there is the spectral, hairy humanoid known as the Man-Monkey, which haunts Bridge 39 on England's Shropshire Union Canal. And, as one more example of many, there is the Goat-Man of Denton, Texas' Old Alton Bridge.

Everything about these cases practically screams "high-strangeness!" An early Dogman report? Maybe that's exactly what it is.