Last week, I received in the mail a review copy of Dr. Karl Shuker's Dragons in Zoology, Cryptozoology, and Culture. This is an excellent book for anyone with an interest in strange and legendary creatures in history, folklore, mythology and more. It's also a superbly compiled book. Running at 220 pages, Dragons... is a hardback book, filled to the brim with color photos, drawings, ancient artwork and more, and all related to the matter of dragons. The book is extensively indexed, too, and contains a detailed bibliography.

It's important I stress to you that neither Karl nor his publisher, Coachwhip Publications (of Greenville, Ohio), are suggesting that real, literal dragons have ever existed. Indeed, the back cover text makes this very clear. In part, it states that Karl's book provides "ample confirmation that there is no sign whatsoever of waning interest for what must surely be the most vibrant, tenacious, and fascinating creature that has never existed - the dragon." 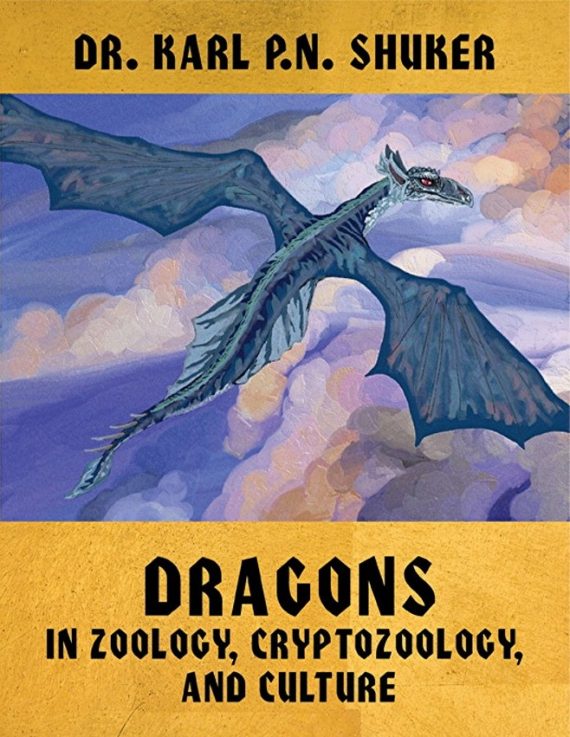 So, what can be said about a famous beast that has never had a place in reality? Well, the answer is, a hell of a lot! Much of the book is related to dragon lore, legend, and mythology - and on a worldwide basis. There are, however, fascinating sections concerning how and why certain creatures of both cryptozoology and zoology may have influenced beliefs in dragons in times long gone - and today, too.

We're treated to a great deal of material on dragon lore in Norse legends (the deadly, rampaging, Jormungander), and various huge and equally legendary "worms" in the UK, such as the Lambton Worm and the Linton Worm. The French Drac, a shape-shifting thing with the ability to render itself invisible, is also profiled. As are the many and varied dragon-like beasts of Korea, Japan, Vietnam, and China. It's in these sections, in particular, that we are provided with a wealth of very cool artwork.

One section of Karl's book that I found to be particularly intriguing is that which details the role dragons have played in influencing astronomy, alchemy, Feng Shui, and art. This is a fascinating section of the book which demonstrates the sheer extent to which the dragon has wormed its way into our lives, and in ways that remain under-appreciated and often unnoticed.

Dragons in the world of entertainment also crop up. We're talking about the likes of Bram Stoker's The Lair of the White Worm, the 2002 movie Reign of Fire, and 1982's Q - The Winged Serpent. And, of course, none other than Tokyo-trashing Godzilla puts in an appearance. How could he not?

Fans of cryptozoology will find much within the pages of Dragons in Zoology, Cryptozoology, and Culture to keep them occupied and entranced. We're talking about the way in which, possibly, unknown animals may have influenced the creation of dragon legends. This includes certain famous sea-serpents and lake-monsters, the mysterious Mokele-Mbembe of the Congo (a reputed 30-foot-long "water dragon"), the "dragon-backed monsters" of Kenya, and the Congo's Katanga Mega-Snake.

Karl also explores the likelihood that sightings, by ancient man in the distant past, of huge and predatory lizards may have led to the development of more than a few dragon-themed myths and legends. A perfect example being the giant monitor lizard of Australia: Megalania. This 20- to 30-foot-long (and possibly crested) monster was almost certainly seen by early humans that settled Australia tens of thousands of years ago. That it spawned at least some tales of dragons seems very likely. Huge crocodiles, alligators, and the fossilized remains of mega-sized dinosaurs are also convincingly shown to have played roles in the creation of the dragon myth.

For me, the most intriguing portion of the book is that dealing with our fascination for dragons, and why they have impacted so deeply and widely on society, culture, history, and folklore. Karl goes down a thought-provoking pathway. He suggests that in the distant past, when "our ancestors were little more than humble rat-like creatures," encounters with huge dinosaurs, giant lizards, and pterosaurs may have had "an enormous psychological impact" on those same ancestors of ours, and implanted "indelible memories of ferocious reptiles into their minds."

In that sense, Karl is talking about how the fascination for - and, often, the accompanying fear of - dragons throughout history may have had is origins in the very earliest times of human development. And such is the lure of the dragon, the fascination continues today, still hot-wired into our minds, even if we're not entirely sure why.

Dragons in Zoology, Cryptozoology, and Culture, is an excellent book, one that will appeal to fans of cryptozoology, history, folklore, pop-culture, mythology and legend. And it's a book that, in the process of dissecting the dragon, reveals a great deal about us, the human race.