Return to Rendlesham: Should We Revisit the Idea of Extraterrestrials?

Recently, the famous 1980 Rendlesham UFO incident has seen renewed media attention, following new information that may indicate an object seen near RAF Bentwaters had been followed by radar operators as well.

The BBC reported on this possible development following a statement from one of the primary witnesses, retired Air Force serviceman Colonel Charles Halt:

"I have confirmation that (Bentwaters radar operators)... saw the object go across their 60 mile (96km) scope in two or three seconds, thousands of miles an hour, he came back across their scope again, stopped near the water tower, they watched it and observed it go into the forest where we were."

The event in question transpired over the course of multiple evenings in late December, 1980. While skeptical interpretations have offered meteors and the nearby Orfordness lighthouse as possible sources for illuminations witnessed that night, Halt has suggested that the object, described by some of the witnesses as roughly triangular in shape, may have been under intelligent control from a "mothership" located elsewhere.

Regarding the Rendlesham story and its new developments, it would indeed be interesting if Halt, or someone else, could obtain official record from the radar operators in question. After all, it would be one thing if some purported “anomalous” object had merely appeared on radar; but if that data were ever to be revealed in conjunction with the reports of an object being observed on the night(s) in question by ground observers like Halt, it would be hard to dismiss the Rendlesham craft as having been a real, tangible object of some kind... whatever that object really may have been.

To the question of what the object had been and, more specifically, what the implications of that question might entail, a friend recently asked me, "How can you seriously entertain the idea that this is any kind of terrestrial technology, and in 1980 no less?"

Without question, if the Rendlesham incident did in fact represent observations of some kind of tangible aircraft, its operation and maneuverability certainly defy any known earthly technologies, even today. And yet, to the point my friend had been making, I have often noted in relation to UFO literature that I feel there isn't enough data to conclusively link extraterrestrial aliens to whatever tangibility may underly the better among UFO reports collected over the years. I would further assert this to be the case with Rendlesham as well... and hence, readers may be wondering, "why so much skepticism, and is it warranted?"

My friend had also pointed out that there is a difference between skepticism and denial, and this is absolutely true. My friend Sharon Hill of the website Doubtful News is one of many to have made made such a distinction between skeptics, and what one might call “denialists” who simply won’t accept certain data, especially if it challenges their existing notions about reality, in the Media Guide to Skepticism she features at her site.

In truth, while I am indeed very skeptical of "evidence" supporting an ET hypothesis underlying UFO reports, I’m very open to the possibility of such visitation... so long as there is evidence to support the idea.

To engage in a bit of a thought experiment about this, let's suppose for a moment that the reason for the rash of UFO reports that occurred during the 50s, 60s, and 70s had, in fact, been intelligent life (or something life-like at very least) from elsewhere, surveying our planet immediately following our widespread use of nuclear weapons during and after the Second World War. For this circumstance, let's further say weapons launched into space over locations like Johnston Island in the 1950s, during Operation Starfish Prime, had specifically managed to attract their attention.

Jacques Vallee, one who, like me, is similarly dissatisfied with the ET hypothesis (ETH), supposed back in the 80s and 90s that the number of UFO reports on record far exceeded what would be necessary to conduct a survey of planet Earth. While I tend to agree with Vallee's perspectives on the subject, we might also observe that this rationale is applying human logic to non-human intelligences; the objects of our present thought experiment. What we might expect to complete in “a few years” may have taken decades for ETs visiting us, and with the passage of time (and a lessened nuclear presence on Earth over the years), we might suppose that this could have influenced why we hear far fewer truly "alien" sounding UFO reports in the modern era. Maybe ETs felt that their presence was no longer a requirement, or perhaps those decades between the 50s and 1990s were all they needed to satisfy the volumes they were keeping on Earth life and activities. 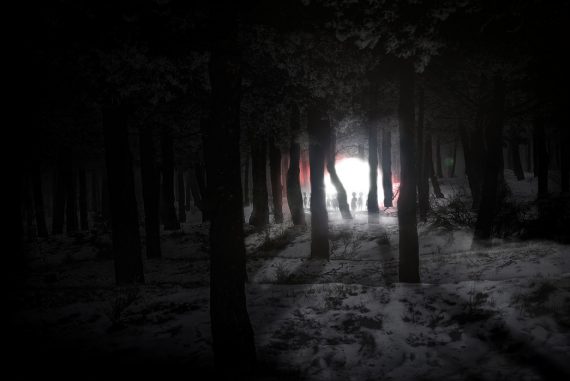 Some may argue that the UFO presence is in our skies is as strong as ever, but if so, how come we don't hear about more incidents on par with Rendlesham, or other famous cases like the Cash-Landrum incident? Nick Redfern and I have both wondered about this, and although unidentified aerial phenomenon is still often reported in the present day, we don’t receive the kinds of reports that once filled the file cabinets of UFO investigation groups, neither in number, nor in strangeness. Sure, UFOs are still seen, but things do seem to have changed... that’s just a fact.

All this said, when I express skepticism about the ETH, it’s in an effort not to leap to conclusions about the purported phenomena being witnessed. If I don’t have the evidence to support those kinds of conclusions, is it really wise (or logical) to presume that what the very best UFO reports entail is truly evidence of ET visitation?

Conversely, the problem with those "denialists" among us is that they suppose that since there isn’t evidence to support an ET element to any of this using hard data, that this means there is simply nothing to UFO reports at all. I would argue here that many hardened skeptics may, at times, overlook the logical extremities that their argument presents. Also, perhaps their argument is largely against an ET hypothesis, rather than merely attacking ambiguous reports of unidentified flying objects that could be any number of things, based largely on the misinterpretation in the modern era that "UFO" means, without exception, "extraterrestrial." Here again, I find little in the skeptical argument against an ETH that I differ with, but this may not rule out various observations of aerial phenomenon that appears to be of an unconventional nature.

With Rendlesham, sure, we see possible evidence of an exotic technology, and so far as any known earthly technologies, what the witnesses reported doesn’t seem to fit into any category with ease. So we might make a few logical suppositions as to what it could have been, however likely or unlikely any of these may be. Here I will present five possible scenarios, ranging from the otherworldly, to the absurd, and yes, the skeptical:

1) The technology observed at Rendlesham was earthly in nature, and of a variety kept secret from the public

2) This was no technology at all, and was instead some variety of anomalous natural phenomena

4) This technology was of extraterrestrial origin

5) This technology was of an origin point external to our understanding of space and time (i.e. inter-dimensional/time travel)

Though it will occur almost inevitably, I will go ahead and say that I am not endorsing any particular possibility aforementioned; I present them merely to outline possible conclusions that might be drawn, regarding the nature of the circumstances reported around the time of December 26, 1980 near RAF Bentwaters.

I also feel that it is healthy to explore a variety of possibilities in relation to such incidents, so that we don't become entirely beholden to one possible scenario or solution. I'll remind readers here that, among the theories about what the object seen in Rendlesham forest might have been, some of the purported witnesses had even suggested the far-out possibility of "time travelers from the future." Whether you buy that or not is irrelevant; what's important is to remember that even those involved with the case have supposed something other than extraterrestrials had been at work here.

For now, what can we make of this "new evidence" that something exotic had been hanging around Rendlesham forest around Christmas in 1980? If Charles Halt is right, maybe we're getting closer to understanding what actually occurred, and with any luck, Halt's statements will be backed up with data that helps indicate--beyond conjecture--that a tangible object was not only witnessed, but also recorded on radar. And until that time, Rendlesham will remain what many have already maintained for years: one of the more compelling and convincing among UFO incidents of the last several decades.

The Spectral WWII Bombers of the United Kingdom