You may want to turn off your robotic vacuum cleaner – and maybe take out its battery and lock it in the closet – before reading this tragic and scary story. A worker in an automotive factory in Germany was grabbed by a robot and held against a metal slab until his chest was crushed. He died later from the injuries. Is this an error … or a warning?

The incident occurred on June 29, 2015, at a Volkswagen plant in Baunatal north of Frankfurt. The victim’s name was not released due to the ongoing investigation of the incident, but a Volkswagen spokesperson said the 22-year-old contractor was installing the robot on an assembly line with another worker when it grabbed him with its robotic arm and inflicted the fatal injuries. The other worker was not harmed. Ironically, the dead worker was inside a so-called “safety cage” when it happened while the other was outside of it.

Volkswagen is blaming this death-by-robot on a human error rather than a problem with the robot. As expected, lawyers are already pursuing pressing charges.

Although extremely rare, this is not the first human death directly caused by a robot. In 1981, engineer Kenji Urada was working on a broken robot at a Kawasaki Heavy Industries plant in Japan. He neglected to shut it down completely and the robot’s arm pushed him into a grinding machine, causing fatal injuries. Kawasaki kept this first death-by-robot quiet for six months until an investigation was completed. In 1979, Robert Williams was killed by a malfunctioning robot at a Ford plant in Michigan when the robot’s arm crushed his head.

These factory robots are powerful yet simple in comparison to the complex robots being built (some already in use) that can walk, fly, drive and operate weapons. It’s easy to blame accidents on human error, malfunctioning software, mechanical problems and the like. Death by robot is another matter, especially if it begins to happen more frequently. In this culture where we seem to be moving away from regulations, isn’t this one area where we should have more … before your vacuum cleaner or your car attempts to kill you?

Should we be concerned? Afraid? Terrified? What do you think? 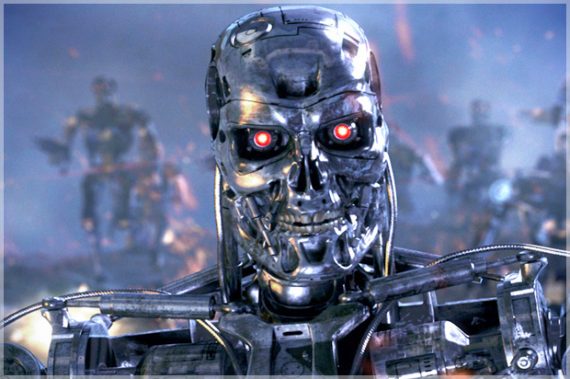