Within the domain of Bigfoot-themed movies, there are some that are very good and more than a few that are downright terrible. Situated somewhere between both camps are those films of a Sasquatch nature that have developed cult-like followings, purely due to the fact that while they’re not great, they’re still engagingly watchable and memorable. One of those is a made for television movie titled Snowbeast.

Released in 1977, it’s a production focused on the presence of a killer Sasquatch on the loose near a Colorado ski resort. Gar Seberg (actor Bo Svenson) is a retired, Olympic skier who, with his wife, Ellen, heads to the resort, where Seberg is seeking work.

Interestingly, Ellen is played by actress Yvette Mimieux, who is not only a qualified anthropologist, but who also co-starred in the 1960 movie version of H.G. Wells’ novel, The Time Machine – in which she was forced to flee from primitive, ape-like monsters living deep underground in a future Earth decimated by nuclear war.

Of equal interest, Snowbeast was directed by Herb Wallerstein, who also worked on the popular 1970s television series, The Six Million Dollar Man, which featured a Sasquatch in a two-part, 1976 story, The Secret of Bigfoot, as well as a couple of sequels.

No sooner have Gar and Ellen arrived at the resort – in the Colorado Rockies – when several skiers go missing. The disappearances are not due to accidents on the slopes, however. Rather, it’s all down to a Bigfoot that appears to want to do nothing more than slaughter everyone that crosses its path.

Unfortunately for the skiers, the owner of the Rill Ski Resort, Carrie Rill (actress Sylvia Sidney, whose final movie was 1996’s Mars Attacks!), realizes that a deadly Bigfoot would be very bad for business, and so she elects to bury the facts. Sheriff Paraday, the local law-enforcement officer (played by Clint Walker, whose movies included a monster-themed 1974 production, Scream of the Wolf), goes along with the plan to play the matter down, by saying there’s nothing stranger than a wild bear in the area, and that people should keep well away from it.

Rill’s son, Tony, is a good friend of Seberg and offers him a job at the resort. In doing so, he reveals the truth of the mysterious disappearances in the area: that they’re due to a deadly Bigfoot. This fascinates Seberg, since Ellen works in the world of media and, coincidentally, previously was employed on a documentary show about Bigfoot. 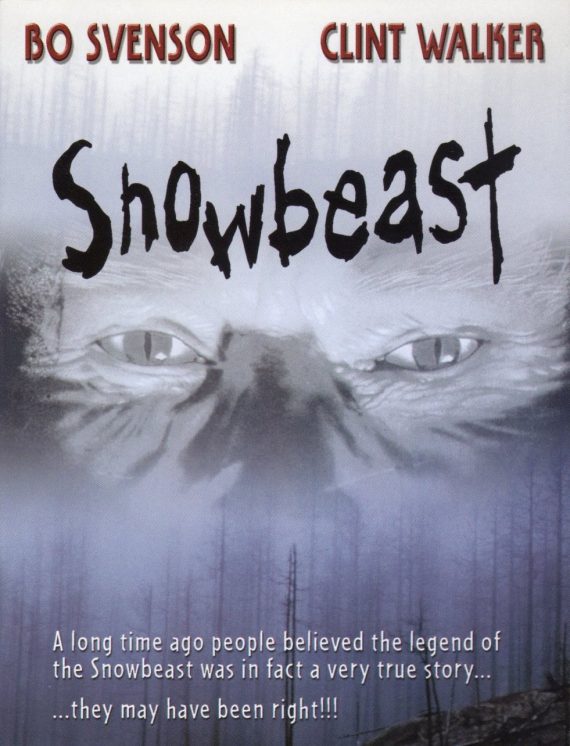 Snowbeast takes an interesting turn by suggesting to the viewer that killing such a creature might be considered murder, and particularly so if the beasts are related to the Human Race. We see this when both Seberg and Ellen argue that taking the life of the Bigfoot is plain wrong – at least, that is, until the monster goes on a violent killing spree.

Realizing that there is no choice but to end the reign of terror in decisive fashion, Seberg, Ellen, Sheriff Paraday, and Tony corner the creature on the edge of a mountain where a combination of bullets and a ski pole - used as a spear - end its life, and it plunges off the edge of a snowy precipice.

Snowbeast is far from being the greatest Bigfoot movie ever made, but it is an undeniably entertaining 86-minutes of Sasquatch mayhem.

The Grinning “Gorilla” of Canada