The Beast-Man of Bowman’s Woods

On March 27, 1907, the Nevada-based Reno Evening Gazette newspaper ran a story with the very eye-catching title of “Wild Man Startles People of Kentucky.” The sub-title added even more to the eye-opening and jaw-dropping nature of the story: “Hairy Creature Seen by Farmhand, and Both Are So Scared That They Prepare to Run.” The story revealed a great deal, all of it astonishing and controversial...

“Information has been received here that the people in the country around Buena Vista, a village in Garrard County, are much excited over the reports that a wild man has high haunts in the Kentucky River hills near that place. A party is being organized to explore a cave where the creature is believed to have his lair and attempt to capture him.” 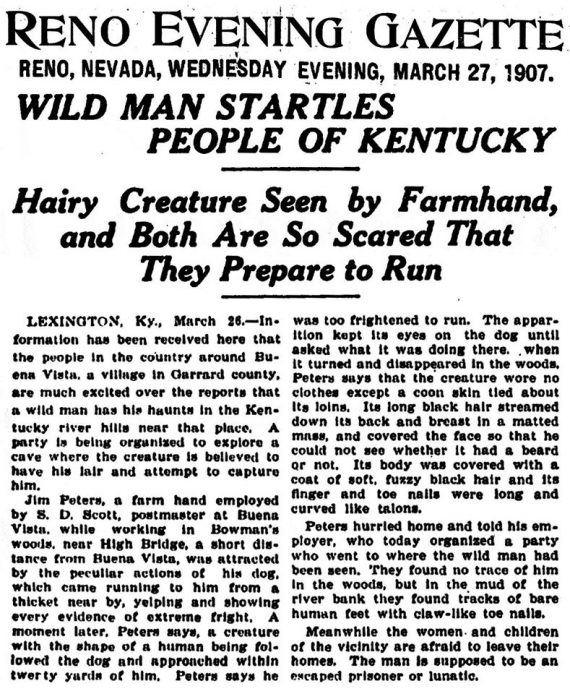 The saga continued that one Jim Peters, who was a farm-hand working for a man named S.D. Scott – the postmaster at Buena Vista – encountered the hair-covered man-thing in Bowman’s Woods, in the vicinity of High Bridge. Peters believed that the wild man was attracted by the scent of his dog, which may very well have been the case. Indeed, in the presence of the hair-covered thing Peters’ faithful pet responded by “yelping and showing every evidence of extreme fright.” Peters was just as terrified as the dog, and particularly so when the creature approached to within barely sixty feet of the pair.

The writer of the newspaper article detailed what happened next: “Peters says he was too frightened to run. The apparition kept its eyes on the dog until asked what it was doing there.” Unsurprisingly, the hairy man-beast failed to respond in English – or in any known language - to Peters' unintentionally amusing question. Instead, it turned and vanished into the dense woodland. Fortunately, Peters was able to get a good look at the monster. He described it as having long and wild dark hair. It wore “a coon skin tied about its loins.” And it had claw-like talons, instead of fingernails. 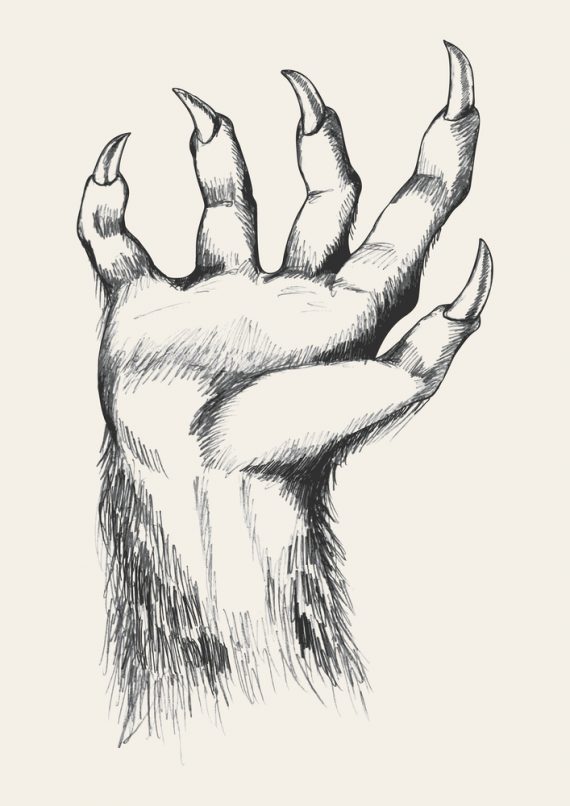 When fear-filled Peters finally made it back to Buena Vista, he told his boss, S.D. Scott, what had just gone down. Scott, seeing that Peters was serious and not pulling a prank on him, quickly whipped up a posse to track down what may very well have been some type of Bigfoot-like creature. Although the beast was not found, its tracks were: in the mud of the river bank.

Local women and children were said to be too scared to leave their homes, while the most popular theory – albeit an extremely unlikely one, taking into consideration the physical appearance of the thing – was that the man-monster was an escaped lunatic from a nearby asylum. Evidently, the wild man got wind of the fact that he was being hunted down and headed off for pastures new. He was not seen again in Bowman’s Woods.

Was this an early encounter with a Bigfoot? A primitive human? Or something else? More than a century later it's extremely difficult to say. We can make a few observations, however. First, there is the matter of Peters' dog reacting in a frightened fashion to the presence of the man-beast. There is a long history of hostility between Bigfoot and dogs, which suggests the creature quite possibly was an example of the United States' most famous monster.

The second observation revolves around Peters' words that the animal had claw-like talons, rather than fingernails. This is most unlike Bigfoot and far more suggestive of something else. But what? And then there is the issue of the thing wearing a "coon skin" that was "tied about its loins." Yes, we do occasionally get reports of Bigfoot wearing ragged clothes - as strange as such a thing might sound - so perhaps that pushes things further down the road to Bigfoot. As for the monster having "long, dark, wild hair," that is certainly not typical of Bigfoot, whose hair is generally described as being short.

In other words, the man-beast of Bowman's Woods was a definitive anomaly. It still is.

The Cursed Paradise of Italy