The Electronic Fog: A Strange Trip Through Time, Space, and Tailwinds

In 1901, two women claimed that while visiting the Palace of Versailles together, a number of strange phenomena began to occur which led them to feel that space (and perhaps time) had changed in a very unconventional way. Known today as the Moberly–Jourdain incident, the story remains among the more famous cases of purported time travel that occurs without the aid of any supplemental machinery.

Such stories of purported "time slips", as they have come to be called, have probably been told for a long time--perhaps for as long as there have been notions of a past existing apart from the present. In equal measure, they appear to continue even today, with reports of odd environmental changes still reported by individuals in various locations from time to time.

Perhaps one of the very strangest incidents where the boundaries of time and space reportedly broken down involves a pilot en route to Bimini with his father, who claimed that they encountered a strange "electronic fog" along the way. In addition to interrupting their travel, the fog they passed through purportedly carried them several miles off course, and in a fraction of the time normally required to do so.

The odd story of Bruce Gernon has been retold in a number of television documentaries. His story goes something like this: he and his father had been flying to Bimini together, when they observed what Gernon describes as a "strange cloud with almost perfectly round edges hovering over the Miami shore." Gernon and his company attempted to fly over the strange formation, and at 11,500 feet after thinking they had evaded the cloud, they began to realize a tunnel had been formed instead, into which they were now flying.

The inner walls of the cloud, forming a series of lines that moved counter-clockwise in a spiraling motion, carried the men along as all navigation systems onboard Gernon's plane became unreadable. All visibility was reduced to an un-ending infinity of gray, which they could only estimate to be a few miles in depth.

Within a few minutes, ATC operators made contact, stating that they had located Gernon's aircraft over Miami Beach; however, the short time they had spent in the air (45 minutes) couldn't account for the 75 minutes required to reach their present location.

Further details of Gernon's strange story are related in the video below:

The story of Bruce Gernon's purported teleportation (for lack of a better word) has fueled theories about similar strange activity occurring around the famous Bermuda Triangle, a region famous for its history of strange disappearances and other odd phenomena reported by those passing through it. Gernon's tale has even inspired the likes of David Pares, a physicist in Omaha who has dedicated is waking hours to building a function warp drive.

However, despite the apparent rift in space-time reported by Gernon and his crew, another interesting scenario has been offered as to what may have happened. Granted, neither scenario is really anything that has been proven possible, at least to-date; however, the implications of this alternative might be worthy of consideration, if found to be applicable to stories like Gernon's. 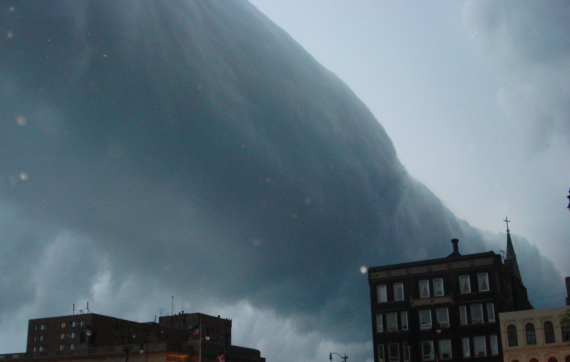 This secondary scenario involves a phenomenon known as a "roll cloud" (pictured above), which is a very rare, tubular variety of arcus cloud. These cloud formations, in addition to being seldom in appearance, are also described as being self-contained from nearby cloud formations, despite stretching as far, at times, as the extent of a visible horizon.

One commentator on the website SkepticForum.com offered the notion that, rather than being purely a hoax, perhaps Gernon had actually flown through such an arcus cloud formation... something no pilot is known to have done at present. Of this possibility, the author asked a number of interesting questions:

Consider the possibility that Gernon entered one and was moved quickly inside it horizontally. I am presuming that a roll cloud has a rapidly moving core as in a tornado, not spinning, but linear. The core of a hurricane, for example, is clear with a rapidly rising air column. It could carry an airplane horizontally at speed. In addition the static electrical effects of rapidly moving layers of air could adversely affect electrical and magnetic aircraft instruments.

What if this had indeed been what had occurred with the events surrounding Gernon's purported teleportation to the airspace above Miami Beach? Could wind speeds within such an odd cloud formation effectively propel an aircraft forward in such a way (without the pilot and crew on board noticing, of course)?

Altogether, the more important question involves whether this scenario is indeed any more plausible than what Gernon had initially claimed, which he has maintained for a number of years now. Certainly, this might offer a somewhat more down-to-earth explanation than that of some space-time warpage having occurred. But could an aircraft traveling through a roll-cloud formation indeed move fast enough to traverse the 75 minute journey Gernon and Co. had embarked upon, and in a short span of 45 minutes? Or would this distance have truly required so much as a mysterious arcus cloud to carry them the distance in the amount of time they spent airborne?

Who knows, and for the time being, it seems unlikely that we'll be flooded with volunteers willing to attempt to recreate the circumstances that led to Gernon's mysterious flight.